In his latest book, Roger Martin warns us that, "In the case of American democratic capitalism, the proxies that we have adopted for measuring and driving efficiency are turning our pursuit of efficiency into a destructive force." 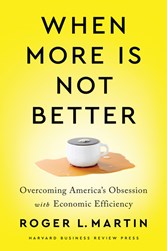 Economic models are extremely useful, and influential, but they should never be confused for an accurate reflection of reality or the actual economy. Just as they are used to offer projections, these models are themselves best seen as projections—of our own psyche, in part—that use our human reliance on metaphors and analogies to make sense of the world around us. The underlying metaphor we’ve largely settled on for our economy is that of a machine, with measurable inputs and outputs that can be understood and adjusted to reach an optimal—usually seen as the most efficient—outcome. This metaphor, Roger Martin explains in his new book, has a history dating back to Adam Smith’s Wealth of Nations—published, incidentally perhaps, the same year America declared its independence—and that has been embraced in the ideas of the most influential economists since then. This focus on efficiency has brought about real improvements in the past, but it has been taken to extremes never imagined by those whose ideas have driven it—and to a point that it is no longer serving us well. It has, Marin believes, become an obsession that has undermined the economic security and mobility that has built and sustained Americans’ very faith in our democratic capitalist system.

Martin notes, soon after writing those words, that not all economists agree with this data, that some suggest the decrease in cost of goods and increases in technology have more than made up for declines in real earnings over the last 40 years. But I am not sure that shopping at big box stores and becoming glued to our devices really counts as an increase in standard of living. Those are, of course, my own stand-ins for the larger trends that have taken place, with a decidedly skeptical spin. But the use of proxies is also a big part of why we’ve let our obsession with efficiency steer us against our own long-term interests. As Martin writes:

In the case of American democratic capitalism, the proxies that we have adopted for measuring and driving efficiency are turning our pursuit of efficiency into a destructive force.

Martin explains how the proxies we use to measure our goals—from higher test scores in schools to the number of new accounts opened in banks—have embedded flaws that have actually undermined their success. In the case of No Child Left Behind, and Wells Fargo, they led to cheating and fraud. These are the schools that educate our children and banks that we entrust with our life savings, so the stakes don’t get much higher. But because the use of such proxies are systemic in the way we measure outcomes in our economy, they touch nearly every aspect of our lives.

In the case of American manufacturing, it led to the outsourcing of jobs as businesses used lower labor costs as a proxy for increased efficiency, even as it extended their supply chains around the globe. A company’s stock price has become a stand-in for its value, even if it has to undermine its long-term stability to satisfy markets’ desire for short-term profits (somehow “maximizing shareholder value” means large profits now, not sustainable profits over the long term). You probably hear a lot of talk about how employees are a company’s greatest asset, but mass layoffs are usually rewarded by the stock market because they are seen as lowering labor costs and making the company more “efficient”—even if it eliminates the necessary slack in employment levels that make business operations more sustainable, and even though there is ample evidence that layoffs generally cost more than they save, over the long term. It has gotten so silly that no one even pretends that valuations in Silicon Valley—the so-called new economy—have any basis in reality. Is that where we are headed as a whole?

This is what it looks like when proxies become farce, but there is so much of the nation’s wealth washing through and caught up in this system and its assumptions that it seems impossible to imagine it otherwise. Even in economic policy, the pursuit of efficiency has led to abandonment of the nation’s antitrust laws, allowing increasing consolidation in industry after industry, even as it undermines competition and innovation.

I am not going to get into Gaussian versus Pareto distributions here, as Martin adeptly and intelligently does. Suffice it to say that the obsession with removing anything seen as an “inefficiency” is leading to economic infrastructures and ultimate outcomes—including massive income inequality—that are unsustainable. And so we must imagine it otherwise. And Marin does, offering up a book that is far more focused on solutions that are already in place and working than it does on the problem. It begins with changing our metaphor of the economy from that of a perfectable machine to a complex adaptive system.

Continuous improvement is possible. It should be, and is, expected. But for the past 40+ years, American democratic capitalism has simply not provided the economic gains and continuous improvement for most people that we have come to expect of it. It is, as he writes, a systemic issue, but Martin is wise enough to have explored its effects on the lives of individuals—their lived experiences, opinions, and outlooks—by embarking on a six-year project at the The Martin Prosperity Institute conducting in-depth interviews called the Persona Project. What he found is that:

The outcomes are systemic, and without a fundamental shift in how we manage the economy, they will get only more out of alignment with our hopes and assumptions. I believe that this shift needs to start with abandoning the perfectable-machine model of the economy. We should instead understand the economy in more natural terms, as a complex adaptive system—one that is too complex to be perfectable, one that continuously adapts in ways that will almost certainly frustrate any attempts to engineer it for perfection.

What if CEOs could focus on creating and delivering value for employees and customers instead of meeting earnings expectations? What if companies could focus on delivering the best solution instead of the most efficient one? What if policy makers focused on building resilience and stability for workers, businesses, and the overall economy, instead of ever more economic efficiency—even if doing so ultimately undermines it by increasing its overall fragility and exposure to existential risk?

There’s an irony in that while America is entranced with Amazon Incorporated, with its machine learning and algorithms, the country would actually learn more by drawing analogies from that company’s eponym, the world’s biggest and most complex rainforest.

What if we designed a model based on complexity, adaptivity, and systemic structure? Martin helps us envision the result, and lays out an agenda for business executives, political leaders, educators, and citizens to achieve it. The social contract has been shredded, and the rules rewritten, in the pursuit of efficiency, the promises and presumed benefits of which have not been realized—or at least not broadly shared. It is time to rethink our assumptions, and update our metaphors. 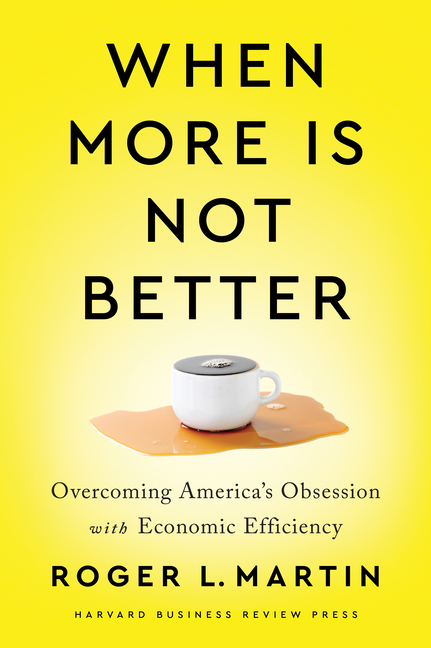