Katrine Marçal gives us a better understanding of economics by doing something that seems obvious, including the historical perspective and labor of women. “How do you get your dinner? That is the fundamental question of economics.” So begins the first chapter of Katrine Marçal’s powerful new book, Who Cooked Adam Smith's Dinner?

The field of economics is built around the ideal of “economic man,” an independent, rational being that always acts in his own self-interest. And even though we’ve known for at least thirty years that "economic man" is an absurd, incomplete idea, and there have always been economists that argued against that supposed ideal, he still sits at its center. Even the burgeoning field of behavioral economics uses economic man as a starting point, if only as a simplified straw man to knock down or light aflame. And yet, behavioral economists also tend to see acting rationally and in our own self interests as the ultimate goal, and study ways in which we can all be nudged in that direction.

Of course, the idea of economic man doesn’t even take into account half of the population, the half that at the time Adam Smith was formulating the idea wasn’t getting paid for their work because it was domestic, supposedly outside of and somehow unrelated to supporting the economy. That it to say, it didn’t bother considering the labor or perspectives of women. And that has had far reaching implications for, and effects on, the way our economies and societies have developed since the advent of Smith’s ideas.

To write (and right) the story of economics, and the history of the field, Marçal turns to the feminine—and yes, feminist—perspective

Feminism has always been about economics. Virginia Woolf wanted a room of her own, and that costs money.

Marçal provides a complete history of the ideas behind, and subsequent realities of, market economics. She is a writer’s writer, using brilliant literary and historical metaphors to bring clarity and life to the story. She uses Robinson Crusoe as the perfect “example of economic man”—literally man isolated as an island—to set overall the story of classical economics in motion. She explains how economists studying games of chance to understand the market, and bringing game theory to finance in 1944 was so destructive. She refers to it as when “Dr. Stranglove went to work on Wall Street”—particularly apt because the man that literally wrote the book on game theory, John Von Neumann, was also on the committee that decided which Japanese cities the United States would drop the atom bomb on in WWII. She uses the second act of Goethe’s Faust to teach us more about the financial crisis of 2008—and just for good measure, gives a brief and brilliant history of money and monetary policy along the way. (“Goethe wasn’t just one of the greatest poets in the history of the word.” Marçal notes, “He was also the minister of finance in Weimer.”)

What we see is that, whereas the ideal of economic man and the economic theories and models built upon him are supposed to be completely rational, markets themselves seem to be mostly emotional, if not completely hysterical. That’s partly apparent by the language we use to describe it:

The market can be positive, worried, overheated, happy and upset—a remarkable beast full of feelings.

When the market is rising, the system—as messy and chaotic as it is—seems to work. Even if there is inequality and suffering, we can at least believe a rising tide will eventually lift all boats. But when things go wrong, well…

When the market is unusually upset (clinically depressed or in some form of free-falling anxiety), then society has to make an offering to it. Great sums of money.

And it’s not just that we have to bail out this theoretical model when it fails in the real world, it’s that the very idea of economic man has fundamentally altered the way we see ourselves. Even as we admit that it's an absurd, incomplete, and potentially harmful model of our lives (an oversimplification, even, of just our economic lives), it has become the ideal we aspire to.  Yet it is a false ideal. We all really want to feel, to connect with one another, to love, to care for our families and be cared for—qualities economic man is incapable of. And this is where we bump into the tricky notion of “having it all” and “leaning in” that professional women are confronted with:

To uphold the idea that economic man is universal, woman must be stuffed into the model as if she were just like him. Here you are, here are equal rights and equal freedom to compete in the workplace. Go forth and conquer!

That’s why a woman has to prove her worth in a job market that is essentially still shaped by the needs of men. Advance herself in a framework created by men, for men—from a reality that excludes women. And this creates problems.

Women have always worked, of course. At least, poor women have always worked. Those well off enough could always afford “help.” Yes, feminism has always been about economics, but it has largely been about the economics of women in the middle class who were able to aspire to and reach for something they didn’t have—whether it was a room of their own or true economic empowerment. As Anne-Marie Slaughter did in her book, Unfinished Business, last year, Marçal broadens the perspective to include all women, indeed all of society. The women's movement has made great strides in economically empowering women, in giving them a choice of whether to pursue a career outside of the home.

But the very notion of a full-time career is still built around full-time domestic help. Today, women are supposed to work full-time, but full-time help is only available to those that can afford it. Who cleans the cleaners house? Who takes care of the nanny’s daughter? These aren’t just rhetorical questions, they are issues where the answer can only be found by following a complicated network of care wrapped around the global economy.

These are hard questions. Most families struggle with them almost every single day, not just because we have to find and pay for care for our children or sick relatives. Poor women—those who are still largely relegated to low-wage domestic work and caring for others—struggle with it most of all. But even professional women are held to a different societal standard of family life, are still expected to take on the bulk of housework and childcare.

They say that Ginger Rogers did everything that Fred Astaire did—except that she did it backwards and in high heels. And that’s what women continue to do.

In other words, economic man is still leading the dance. Women are expected to enter the fray, keep up with the pace even as they give birth and take on more burden than men to balance a family, and the issue of work-life balance is largely seen as a women’s issue.

Adam Smith was brilliant. He also remained a bachelor his entire life, and he lived with his mother for most of it. He obsessed incessantly over how goods were produced and men acted in the marketplace, and answering the questions he had launched the field of economics as we know it. But, he missed a key consideration in “the fundamental question of economics.”

Adam Smith only succeeded in answering half of the fundamental questions of economics. He didn’t get his dinner only because the tradesmen served their own self-interests through trade. Adam Smith got his dinner because his mother made sure it was on the table every evening.

Smith coined the term “the invisible hand” that has become so widespread in economics. But, it turns out the real invisible hand may have been the one that put the dinner on his table every night for his entire life—his mother’s, whose efforts and labor were uncounted in his equations and went uncompensated. Not until we take economic man off his pedestal, and add the feminist perspective to economics, will we be able to begin addressing some of the real underlying structural problems in our workplaces, economy, and society. 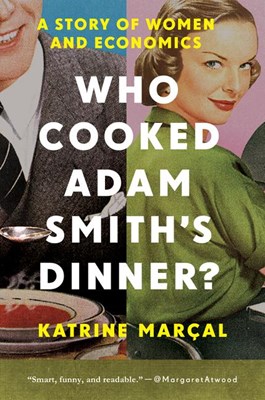