In the Introduction to A Curious Mind, Brian Grazer answers an obvious question: "What’s a guy like [him] doing writing a book about curiosity?"

A Curious Mind and a Curious Book

IT SEEMS LIKE A GOOD idea to start a book about curiosity by asking an obvious question:

What's a guy like me doing writing a book about curiosity? I'm a movie and TV producer. I live immersed in the most densely populated epicenter of entertainment in the world: Hollywood.

Whatever picture you have of the life of a Hollywood movie producer, I've probably lived it. We often have ten or more movies and TV shows in production at a time, so work means meeting with actors, writers, directors, musicians. The phone calls—with agents, producers, studio heads, stars—start well before I reach the office, and often follow me home in the car. I fly to the movie sets, I screen the trailers, I go to the red-carpet premieres.

My days are hectic, they're overscheduled, they're sometimes frustrating. Usually, they're great fun. They're never dull.

But I'm not a journalist or a professor. I'm not a scientist. I don't go home at night and research psychology as a secret hobby.

So what am I doing writing a book about curiosity? Without curiosity, none of this would have happened.

More than intelligence or persistence or connections, curiosity has allowed me to live the life I wanted.

Curiosity is what gives energy and insight to everything else I do. I love show business, I love telling stories. But I loved being curious long before I loved the movie business.

For me, curiosity infuses everything with a sense of possibility. Curiosity has, quite literally, been the key to my success, and also the key to my happiness.

And yet, for all the value that curiosity has brought to my life and my work, when I look around, I don't see people talking about it, writing about it, encouraging it, and using it nearly as widely as they could.

Curiosity has been the most valuable quality, the most important resource, the central motivation of my life. I think curiosity should be as much a part of our culture, our educational system, our workplaces, as concepts like "creativity" and "innovation."

That's why I decided to write a book about curiosity. It made my life better (and still does). It can make your life better too.

I AM CALLED A movie producer—I even call myself that—but really what I am is a storyteller. A couple of years ago, I started thinking about curiosity as a value I wanted to share, a quality I wanted to inspire in other people. I thought, What I'd really like to do is sit down and tell a few stories about what curiosity has done for me.

I'd like to tell stories about the sheer joy of discovery that open-ended curiosity offers. That's the kind of joy we have as kids when we learn things just because we're curious. You can keep doing that as an adult, and it's just as much fun.

The most effective way to pass on these stories—to illustrate the power and variety of curiosity—is to write them down.

So that's what you're holding in your hand. I teamed up with journalist and author Charles Fishman, and over the course of eighteen months, we talked two or three times a week—we've had more than a hundred conversations, every one of them about curiosity.

I know very well how important curiosity has been to my life. As you'll see in the coming chapters, I long ago figured out how to be systematic about using curiosity to help me tell stories, to help me make good movies, to help me learn about parts of the world far from Hollywood. One of the things I've done for thirty-five years is sit down and have conversations with people from outside show business—"curiosity conversations" with people immersed in everything from particle physics to etiquette.

But I had never turned my curiosity on curiosity itself. So I've spent the last two years thinking about it, asking questions about it, trying to understand how it works.

The technique is the same—asking questions—regardless of the subject, but the mission, the motivation, and the tone vary. The curiosity of a detective trying to solve a murder is very different from the curiosity of an architect trying to get the floor plan right for a family's house.

The result is, admittedly, a slightly unusual book. We tell it in the first person, in the voice of Brian Grazer, because the central stories come from my life and work.

Partly, then, the book is a portrait of me. But, in fact, it's more of a working portrait of curiosity itself.

Curiosity has taken me on a lifetime of journeys. Asking questions about curiosity itself in the last two years has been fascinating.

And one thing I know about curiosity: it's democratic. Anyone, anywhere, of any age or education level, can use it. One reminder of curiosity's quiet power is that there are still countries on Earth where you have to be very careful at whom you aim your curiosity. Being curious in Russia has proven fatal; being curious in China can land you in prison.

But even if your curiosity is suppressed, you can't lose it. It's always on, always waiting to be unleashed.

Life isn't about finding the answers, it's about asking the questions.

Excerpted with permission of the publisher, Simon & Schuster, from Curious Mind: The Secret to a Bigger Life by Brian Grazer and Charles Fishman.
Copyright 2015 by Brian Grazer.
All rights reserved.
This book is available at all bookstores and online booksellers.

Brian Grazer is the producer of A Beautiful Mind, Apollo 13, Splash, Arrested Deevelopment, 24, 8 Mile, Empire, and J. Edgar, among others. His films and TV shows have been nominated for forty-three Academy Awards and 149 Emmys. In 2007, he was named one of Time's 100 Most Influential People in the World.

Charles Fishman is the acclaimed author of The Wal-Mart Effect and The Big Thirst. He is a three-time winner of the Gerald Loeb Award, the most prestigious prize in business journalism. 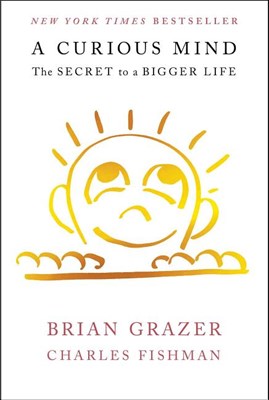