W. Chan Kim and Renée Mauborgne tell us how numbers-based goals are ineffective, even counterproductive, motivation—and what to replace them with. "Blue sky" thinking is good for coming up with new ideas and exploring potential, but at some point those ideas have to come down to earth, and that is where Blue Ocean Strategy comes in. W. Chan Kim and Rene Mauborgne's book has sold over 3.5 million copies, and it "argues that lasting success doesn't come from battling competitors but from creating 'blue oceans'—untapped new market spaces ripe for growth." But, if you're ready to go from exploring to implementing ideas, you need to set a strategy and some goals. The authors explain in the excerpt below why your goals should be set not by arbitrary numbers or self-concocted questionnaires, but by face-to-face encounters with your customers.

Break through the Cognitive Hurdle

In many turnarounds and corporate transformations, the hardest battle is simply to make people aware of the need for a strategic shift and to agree on its causes. Most CEOs will try to make the case for change simply by pointing to the numbers and insisting that the company set and achieve better results: "There are only two performance alternatives: to make the performance targets or to beat them."

But as we all know, figures can be manipulated. Insisting on stretch goals encourages abuse in the budgetary process. This, in turn, creates hostility and suspicion between the various parts of an organization. Even when the numbers are not manipulated, they can mislead. Salespeople on commission, for example, are seldom sensitive to the costs of the sales they produce.

What's more, messages communicated through numbers seldom stick with people. The case for change feels abstract and removed from the sphere of the line managers, who are the very people the CEO needs to win over. Those whose units are doing well feel that the criticism is not directed at them; the problem is top management's. Meanwhile, managers of poorly performing units feel that they are being put on notice, and people who are worried about personal job security are more likely to scan the job market than to try to solve the company's problems.

Tipping point leadership does not rely on numbers to break through the organization's cognitive hurdle. To tip the cognitive hurdle fast, tipping point leaders such as [New York City police commissioner Bill] Bratton zoom in on the act of disproportionate influence: making people see and experience harsh reality firsthand. Research in neuroscience and cognitive science shows that people remember and respond most effectively to what they see and experience: "Seeing is believing." In the realm of experience, positive stimuli reinforce behavior, whereas negative stimuli change attitudes and behavior. Simply put, if a child puts a finger in icing and tastes it, the better it tastes the more the child will taste it repetitively. No parental advice is needed to encourage that behavior. Conversely, after a child puts a finger on a burning stove, he or she will never do it again. After a negative experience, children will change their behavior of their own accord; again, no parental pestering is required. On the other hand, experiences that don't involve touching, seeing, or feeling actual results, such as being presented with an abstract sheet of numbers, are shown to be non-impactful and easily forgotten.

Tipping point leadership builds on this insight to inspire a fast change in mindset that is internally driven of people's own accord. Instead of relying on numbers to tip the cognitive hurdle, they make people experience the need for change in two ways.

To break the status quo, employees must come face-to-face with the worst operational problems. Don't let top brass, middle brass, or any brass hypothesize about reality. Numbers are disputable and uninspiring, but coming face-to-face with poor performance is shocking and inescapable, but actionable. This direct experience exercises a disproportionate influence on tipping people's cognitive hurdle fast.

Consider this example. In the 1990s the New York subway system reeked of fear, so much so that it earned the epithet "electric sewer." Revenues were tumbling fast as citizens boycotted the system. But members of the New York City Transit Police department were in denial. Why? Only 3 percent of the city's major crimes happened on the subway. So no matter how much the public cried out, their cries fell on deaf ears. There was no perceived need to rethink police strategies.

Then Bratton was appointed chief, and in a matter of weeks he orchestrated a complete break from the status quo in the mindset of the city's police. How? Not by force, nor by arguing for numbers, but by making top brass and middle brass—starting with himself—ride the electric sewer day and night. Until Bratton came along, that had not been done.

Although the statistics may have told the police that the subway was safe, what they now saw was what every New Yorker faced every day: a subway system on the verge of anarchy. Gangs of youths patrolled the cars, people jumped turnstiles, and the riders faced graffiti, aggressive begging, and winos sprawled over benches. The police could no longer evade the ugly truth. No one could argue that current police strategies didn't require a substantial departure from the status quo—and fast.

Showing the worst reality to your superiors can also shift their mindset fast. A similar approach works to help sensitize superiors to a leader's needs fast. Yet few leaders exploit the power of this rapid wake-up call. Rather, they do the opposite. They try to garner support based on a numbers case that lacks urgency and emotional impetus. Or they try to put forth the most exemplary case of their operational excellence to garner support. Although these alternatives may work, neither leads to tipping superiors' cognitive hurdle as fast and stunningly as showing the worst.

When Bratton, for example, was running the police division of the Massachusetts Bay Transportation Authority (MBTA), the MBTA board decided to purchase small squad cars that would be cheaper to buy and to run. That went against Bratton's new policing strategy. Instead of fighting the decision, however, or arguing for a larger budget—something that would have taken months to reevaluate and probably would have been rejected in the end—Bratton invited the MBTA's general manager for a tour of his unit to see the district.

To let the general manager see the horror he was trying to rectify, Bratton picked him up in a small car just like the ones that were being ordered. He jammed the seats up front to let the manager feel how little legroom a six- foot cop would get, and then Bratton drove over every pothole he could. Bratton also put on his belt, cuffs, and gun for the trip so that the manager would see how little space there was for the tools of the police officer's trade. After two hours, the general manager wanted out. He told Bratton he didn't know how Bratton could stand being in such a cramped car for so long on his own, never mind having a criminal in the backseat. Bratton got the larger cars his new strategy demanded.

To tip the cognitive hurdle, not only must you get your managers out of the office to see operational horror, but also you must get them to listen to their most disgruntled customers firsthand. Don't rely on market surveys. To what extent does your top team actively observe the market firsthand and meet with your most disgruntled customers to hear their concerns? Do you ever wonder why sales don't match your confidence in your product? Simply put, there is no substitute for meeting and listening to dissatisfied customers directly.

In the late 1970s, Boston's Police District 4, which housed the Symphony Hall, Christian Science Mother Church, and other cultural institutions, was experiencing a serious surge in crime. The public was increasingly intimidated; residents were selling their homes and leaving, thereby pushing the community into a downward spiral. But even though the citizens were leaving the area in droves, the police force under Bratton's direction felt they were doing a fine job. The performance indicators they historically used to benchmark themselves against other police departments were tip-top: 911 response times were down, and felony crime arrests were up. To solve the paradox Bratton arranged a series of town hall meetings between his officers and the neighborhood residents.

It didn't take long to find the gap in perceptions. Although the police officers took great pride in short response times and their record in solving major crimes, these efforts went unnoticed and unappreciated by citizens; few felt endangered by large-scale crimes. What they felt victimized by and harassed by were the constant minor irritants: winos, panhandlers, prostitutes, and graffiti.

The town meetings led to a complete overhaul of police priorities to focus on the blue ocean strategy of "broken windows." Crime went down, and the neighborhood felt safe again.

When you want to wake up your organization to the need for a strategic shift and a break from the status quo, do you make your case with numbers? Or do you get your managers, employees, and superiors (and yourself) face-to-face with your worst operational problems? Do you get your managers to meet the market and listen to disenchanted customers holler? Or do you outsource your eyes and send out market research questionnaires? 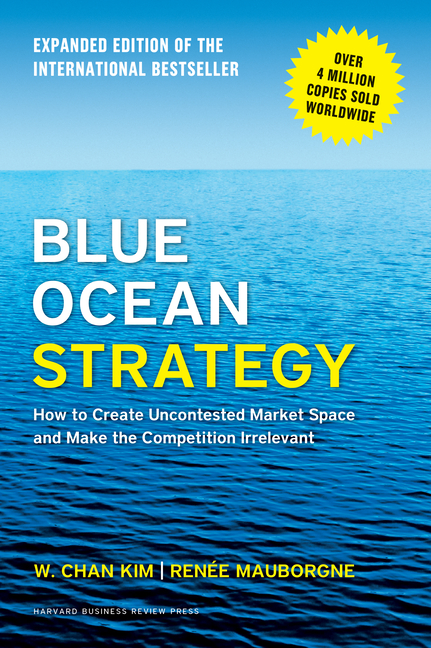