Dorie Clark has penned a hands-on guide to building a portfolio of revenue streams, both traditional and online, so that you can liberate yourself financially and shape your own career destiny.

Dorie Clark has a new book out today, entitled Entrepreneurial You: Monetize Your Expertise, Create Multiple Income Streams, and Thrive. It discusses how the world of work has morphed in an "ever more entrepreneurial, self-reliant, work-from-wherever-you-are economy"—whether we like it, whether we're ready for it, or not. It is a reality that gives those that want it a little more freedom to set out on our own and pursue their passion, but it comes with added uncertainty and responsibility. Entrepreneurial You provides a blueprint to builda successful, independent career in this new world.

Our friends at the Harvard Business Review Press were kind enough to share the following excerpt from Chapter One. In it, Clark explains…

Why We All Need Portfolio Careers

Common wisdom tells us that we should diversify our investment portfolios because it’s foolish to put all our money in one stock. But we’re far less careful on the other end. Too many of us rely on one employer for our entire sustenance, just as I once did.

I was fresh out of grad school and working as a political reporter at a weekly newspaper. Late one Monday afternoon, the human resources director called me into his office; I thought perhaps they were changing our dental plan. Instead, I got laid off, effective immediately—an early victim of the collapsing newspaper industry. HR gave me a box to pack up my desk and one week’s severance pay. I had no idea how I was going to support myself. I had to move fast.

The next morning—September 11, 2001—I woke up and flipped on the television. The day I needed to start looking for a job was the day America changed forever. Planes stopped flying, the stock market stopped trading, and absolutely no one wanted to hire an out-of-work reporter.

That’s when I started to understand the precarious nature of relying on one revenue stream; it could all be taken away instantly. For months, I tried to get another job in journalism, but no one was hiring. I scraped by freelancing; in a good week, I could pull down $800, but more often I brought in half that amount. Finally, I landed a full-time job as the spokesperson on a gubernatorial campaign; I earned what felt like a princely $3,000 per month, until we lost in the primary. I freelanced for another six months until getting hired as the spokesperson on a presidential campaign, which we also lost.

No job, I realized, is secure. Yet working without a “guaranteed” salary still seemed frightening to me; I saw a lot more risks than opportunities. By then I’d run out of choices, however, so I unwillingly became part of the vanguard of entrepreneurs developing a portfolio career—piecing together freelance work and ultimately starting my own business with various revenue streams.

Today, after more than a decade as an entrepreneur, my opinion has reversed. I now believe it’s far riskier not to be diversified; if you’re relying on one paycheck from one employer, you may be courting disaster. The old model, the one that most of us grew up hearing about—“work hard, get a good job, and you’ll be rewarded”—has changed. Hard work is still mandatory, but today, the work has shifted toward an ever more independent, work-from-wherever-you-are business economy. The very idea of what constitutes a career has transformed.

Why? Because technology and the global economy, among other forces, have triggered monumental changes in the world of work that will continue to multiply in the future. When I started my first job at the Boston weekly newspaper, I thought I’d be a journalist for the rest of my life. Back in 2000, newspapers were still extremely lucrative; they were rolling in advertising revenue. The online world was such a minor consideration that our newsroom made do with only one internet-connected computer. I had signed on to the industry at the exact moment it started its inexorable collapse, but I couldn’t see it at the time. When it comes to identifying the precise tipping point of future trends, I doubt any of us can.

In recent years, technology-induced disruption has crushed a number of once-stalwart brands, from Circuit City to Blockbuster to Borders. Plus, there are a lot fewer jobs to go around these days. From 1948 to 2000, jobs grew 1.7 times faster than the population. But from 2000 to 2014, the population grew 2.4 times faster than jobs. The proportion of Americans in the workforce is now the lowest it has been in more than forty years. Competition for jobs is now global, and positions are harder to find.

Shorter job tenure and rapid turnover have also become the norm. A Bureau of Labor Statistics study tracking ten thousand individuals over more than thirty-five years shows that people held an average of eleven jobs—a number that may well be on the rise for younger employees.

At the same time, another trend has risen among US workers: a longing for more job satisfaction. A full 51 percent of US workers describe themselves as “not engaged” at work, and 17.5 percent say they’re “actively disengaged.” Clearly they’re looking for more, both in terms of money—by some measures, wages have been stagnant literally since the 1970s—and personal fulfillment, including a quality of life that many believe comes with independent work. In a survey of self-employed people, the majority cited flexibility as the chief benefit of their choice, and 50 percent said they wouldn’t go back to working a traditional job, no matter how much it paid. No surprise, then, that 34 percent of US workers are currently freelancers, and a study by Intuit asserts that by 2020, that number will rise to 40 percent.

Clearly, if we’re not entrepreneurs already, we all need to start thinking that way. Even if you’re perfectly happy with your day job now, consider entrepreneurship as an insurance policy for your career. Maybe you’ve wanted to start a food blog in your off-hours, or to offer personal or professional coaching to friends and acquaintances on the side. Perhaps you’d like to take on speaking gigs or organize a conference or event for like-minded people. Whatever form it takes, creating such “side streams” of income enables you to take more control of your career, your finances, and your life.

Today, I actually earn my living in seven entirely different ways: writing books, speaking, teaching business school, consulting, executive coaching, online courses, and—since that a-ha moment from my friend John Corcoran—affiliate income through my email list. If one of those avenues goes away, I have enough diversification that I don’t have to worry. That’s a far cry from my position at age twenty-two, when I woke up the day after my layoff wondering how I’d pay my bills. I’m not the only one advocating the importance of multiple revenue streams. Alexandra Levit, author of six books, including They Don’t Teach Corporate in College, told me in an interview,

“I’m all about diversification in every area of my life. I’ve seen too many times where things that you think were going to be huge don’t work out, and that can be really scary . . . So I try to mitigate risk whenever I can. I hedge my bets, so if this doesn’t work out, I’ve got three other things that probably will. If something falls through—and I’ve had that happen dozens of times, things that just completely imploded—I’m still doing OK.”

Jenny Blake, a career and business strategist who is the author of Pivot: The Only Move That Matters Is Your Next One, views her income streams as serving distinct purposes. In the early days of her career, she relied on one-on-one coaching to provide steady revenue—what she called her “bridge income”—while she built up her professional speaking business. Speaking was her true passion, but invitations were unpredictable and sporadic, so she felt it would be dangerous to rely on them exclusively. But balanced with her coaching, “they evened each other out,” she says, and created a steadier income stream.

All of which is to say, enjoying the freedom and independence that comes with developing a portfolio career doesn’t mean giving up income. As Levit, Blake, and countless others demonstrate, creating a portfolio career enables you to dramatically increase your earnings. This book will show you how.

Dorie Clark is a marketing strategy consultant and professional speaker who teaches at Duke University's Fuqua School of Business. She is the author of Reinventing You and Stand Out and is a frequent contributor to Harvard Business Review. You can download her free Entrepreneurial You self-assessment workbook at dorieclark.com. 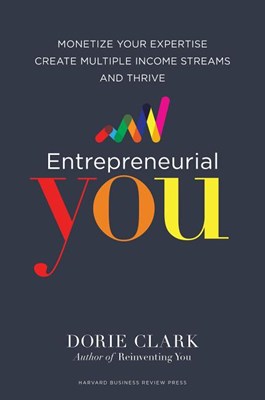