Vikram Akula, founder and chairperson of the SKS Microfinance, was kind enough to provide a post for us this week. In it, he tells the story of how he ended up meeting with some of the richest men Earth to explain to them how the poor make money. His new book, A Fistful of Rice, Is being released tomorrow by Harvard Business Review Press.

Vikram Akula, founder and chairperson of the SKS Microfinance, was kind enough to provide a post for us this week. In it, he tells the story of how he ended up meeting with some of the richest men Earth to explain to them how the poor make money. His new book, A Fistful of Rice, Is being released tomorrow by Harvard Business Review Press.
◊◊◊◊◊◊◊◊◊◊◊◊◊◊◊◊◊◊

Today SKS Microfinance is the largest microfinance institution (MFI) in India. But it wasn't so long ago that SKS was just an upstart idea. When SKS finally did gain traction, I found myself in the surreal position of explaining our model to the world's biggest business and philanthropic leaders who wanted to learn more about harnessing microfinance to alleviate poverty.

In early 1997 the first-ever Microfinance Summit was held in Washington DC. Hillary Clinton, then First Lady, gave the keynote address to an audience of 3,000 people from all over the world. I was in the process of raising seed capital for SKS through 'tea and samosa' parties that relatives and family friends hosted for me. But I was a PhD graduate student at the University of Chicago and had no money myself. I got into the Summit for free by volunteering as an official timekeeper for the sessions.

It was hard to approach panelists when they saw me as just a student volunteer but I still took every chance to tell them about my project. I approached the 'Who's Who' list of microfinance: the heads of Grameen Foundation, the Self-Employed Women's Association (SEWA), Cashpor and Share Microfin. I hustled and talked and introduced myself to anyone interested in my plan. Unfortunately, no one would take a chance on the idea of a for-profit microfinance institution. I hadn't planned on starting my own organization, but there was no other choice. I believed too strongly in the idea to let it slip away.

Fast forward seven years to 2006. After lots of hard work, help and guidance from early donors and supporters, along with plenty of trial and error, SKS was really taking off. In March 2006, SKS counted 200,000 poor women borrowers in India. I announced an ambitious "7 by 7" goal of reaching 700,000 members by March 2007.

In 2006, SKS was fortunate enough to get some favorable media attention. Others far away from India took notice too. The Gates Foundation was considering launching a microfinance funding program and Bill and Melinda Gates had set out to learn everything they could about microfinance. Melinda Gates had already come to India to see microfinance at work in villages. Their next step was to invite eight MFI practitioners to a roundtable in Seattle. We met in a conference room in a nondescript (but, as I was later told, bulletproof) building. Bill Gates Sr. would be joining Bill and Melinda, along with another "friend" of theirs. When they walked into the room, we saw that the friend was Warren Buffett.

We had a wide-ranging discussion on the basics of microfinance and how it was practiced in various parts of the world. Then Bill suddenly asked, "Hold on. What are people possibly doing where they can pay 28% interest on a loan and still make money?" I took a deep breath and started explaining what I call "goat economics."

I described how a landless agricultural worker might use a 2,000 rupee loan (about $40) to buy a goat. She continues with her daily work and takes the goat along with her to the fields. The goat eats grass and virtually anything else, so there is no investment from her end. A goat gives birth to one or two kids a year and the value of the offspring is about 50% of the mother, or about 1,000 rupees. Even if a borrower took a 28% loan, she makes a return of about 70% on invested capital. An interest rate of 28% might seem high, but demand for SKS loans was exploding. We had almost no defaults among borrowers, and re-payment rates were about 99.4%, higher than re-payment rates in the west. Clearly, the system worked for the poor.

There are four other reasons why microenterprises yield very high returns. First, borrowers tend to draw on family to help with microenterprises, which is far more productive than hiring wage laborers. Think of your classic immigrant-owned grocery story in the US where sons and daughters help out. Second, in the informal economy, the poor make too little to pay taxes (they typically make less than $2 a day when they join SKS.) Third, poor entrepreneurs have little infrastructure and overhead costs. A village grocery is a homefront shop, not a separate rental property. And fourth, for the first three reasons, capital is only a small percentage of a new micro-venture's input. What's far more important for a micro-entrepreneur is timely access to capital.

As I finished my explanation of "goat economics" I watched Bill Gates scribble on his note pad. A thought popped into my head: "I'm explaining to the richest man in the world how poor people make money on goats." It was an amazing and affirming moment.

Vikram Akula is the founder and chair of SKS Microfinance. In 2006, TIME magazine named him one of the world's 100 most influential people. He has received several awards, including the World Economic Young Global Leader (2008), the Schwab Social Entrepreneur of the Year in India (2006), and the Ernst & Young Start-Up Entrepreneur of the Year in India (2006). He has been profiled in media ranging from CNN to the front page of The Wall Street Journal. The author of A Fistful of Rice (Harvard Business Review Press, 2010), he lives in Hyderabad, India. 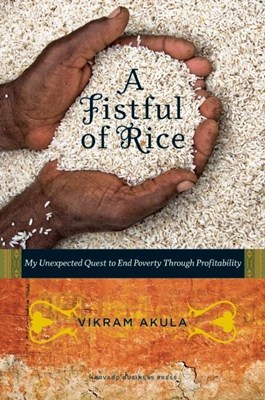 A Fistful of Rice: My Unexpected Quest to End Poverty Through Profitability