Phil Buchanan, the president of the Center for Effective Philanthropy, "arms donors with what it takes to do more good more quickly and to avoid predictable errors that lead too many astray." A majority of American households give to charity in some form or another—from local donations to food banks, religious organizations, or schools, to contributions to prevent disease or protect basic freedoms. Whether you're in a position to give $1 or $1 million, every giver needs to answer the same question: How do I channel my giving effectively to make the greatest difference?

In Giving Done Right, Phil Buchanan, the president of the Center for Effective Philanthropy, arms donors with what it takes to do more good more quickly and to avoid predictable errors that lead too many astray. It busts commonly held myths and challenging the idea that "business thinking" holds the answer to effective philanthropy. And it offers the intellectual frameworks, data-driven insights, tools, and practical examples to allow readers to understand exactly what it takes to make a difference.

The excerpt below, from the book's Introduction, explains why…

Criticism of philanthropy, which has been on the upswing in recent years, comes especially from those who promote the idea that business or market-based approaches offer the answer to the giving challenge. I can’t tell you how many times I’ve heard someone say that philanthropy isn’t effective and that nonprofits and donors need to act more like businesses—although it isn’t clear what that statement even means. This thinking has been going on for a while. I heard it nearly two decades ago while getting my MBA at Harvard, and it’s only grown more intense since then.

Indeed, it seems that much, if not most, of what business school faculty, management consultants, Silicon Valley tech titans (or titan wannabes), and others have written about philanthropy in the past few decades takes the view that charitable giving and the nonprofit sector more broadly are broken and in need of an injection of “business thinking.” People invoke that term as a synonym for “well-managed” or “effective.” I worked as a strategy consultant in the business world, and I can tell you this: It’s not. Moreover, this claim does a disservice to the incredible array of highly effective nonprofits and nonprofit leaders in the United States.

“We must reject the idea—well intentioned but dead wrong—that the primary path to greatness in the social sectors is to become ‘more like a business,’” argued Jim Collins, one of the few prominent business thinkers who seems to understand philanthropy and nonprofits. “Most businesses—like most of anything else in life—fall somewhere between mediocre and good … So then, why would we want to import the practices of mediocrity into the social sectors?”

I agree with Collins, and I’m concerned that the constant critiques of nonprofits as “lesser than” is beginning to alter the public’s and lawmakers’ views, contributing to damaging policy changes like the effective curtailment of the charitable deduction in the tax reform bill that took effect in 2018. (It’s likely to significantly reduce the number of filers itemizing and therefore benefitting from the deduction.) I’m also concerned that the counsel to operate like a business is confusing and runs counter to achieving impact. Most nonprofits and nonprofit leaders I know are rigorous, data-driven, and fully aware of how different their work is than that of business—requiring different approaches to goal selection, strategy development, implementation, and performance assessment.

The most effective givers understand this difference, too. These philanthropists know that, while their business acumen (or that of their forebears) may have created their wealth, giving effectively requires a different set of skills. It necessitates a different level of collaboration and relationship-building, deep humility, and a recognition of how difficult it is to chart cause and effect. In each of these ways, and many others, it’s different than what it takes to be effective in business. It is its own unique challenge, requiring its own unique discipline. That’s what technology entrepreneur and investor Mario Morino found out after the business he helped build was acquired in 1995. Morino, a self-made multimillionaire who grew up in a working-class family in Cleveland, is now in his seventies, with two decades of giving behind him and many lessons learned.

“I probably did as much background research as anyone, and I’d argue I didn’t do enough,” he told me. “I was really arrogant.” Morino said he was too quick to assume that what worked in his business experience would translate to his giving. Over the years, he has become one of the most thoughtful givers I know, and his influence has been significant. But, as he’d be the first to tell you, it hasn’t been easy.

Givers are often seeking to address the most entrenched problems—the very ones that have defied market or government solutions. That intractability means success won’t come quickly. While many givers are anxious about whether they’re achieving results, others have the opposite problem. They think they’ve accomplished a great deal when they haven’t. “Everyone’s puking on the sidewalk while this guy is taking a bow,” Morino explained in his characteristically blunt way.

Morino would agree that we need to be on the lookout for innovative and creative approaches that will work better than the old ones. But he’d also say that he’s learned that there are few easy answers and no quick fixes.

In Giving Done Right, I lay out what we know about what it takes to be an effective giver. It’s about thoughtful goal selection, the identification of smart strategies, great relationships with those you support, and assessment of progress. I also discuss additional tools that you might employ to pursue your goals.

In addressing each of these areas, I draw on the extensive research my organization, the Center for Effective Philanthropy, has conducted since I was hired as its first staff member in 2001. I also draw on what my colleagues and I have seen up close from our work with hundreds of foundation clients, including most of the world’s largest foundations, as well as the individual donors and families affiliated with those institutions. And I tell you the stories—of givers, nonprofits, and those who benefit from their work—that bring effective philanthropy to life. I also sort through the hype about “new” approaches, weeding out the fads from the promising innovations and refuting the most destructive myths. I use examples from both individual givers and institutional ones because I think, regardless of whether you’re giving your own money or you work at a foundation as a program officer, the principles of effective giving apply. There are lessons for all of us in the giving of John D. Rockefeller and Bill Gates, just as there are lessons for tech titans in the giving of those with more-limited resources.

Giving done right sparks a virtuous cycle. Like the famous concept of the butterfly effect, which argues that a single butterfly can change weather patterns, effective giving ripples inward and outward, with far-reaching positive consequences for givers and recipients. So, too, can ineffective giving reap far-reaching negative effects, resulting in tornadoes that inflict damage that was never intended.

Phil Buchanan is founding chief executive of the Center for Effective Philanthropy, a seventeen-year-old nonprofit that conducts research and advises the largest foundations in the country, including Ford, Hewlett, Packard, MacArthur, and Rockefeller. He is also co-founder of YouthTruth, a national student survey provider. He is a columnist for the Chronicle of Philanthropy, and his op-eds and articles have appeared in The New York Times, Stanford Social Innovation Review, and Financial Times. In 2016, the Nonprofit Times named him the nonprofit "influencer of the year," and he has seven times been among the newspaper's "power & influence top 50." He speaks around the country on philanthropic issues and lives in Lexington, Massachusetts with his wife and two daughters. 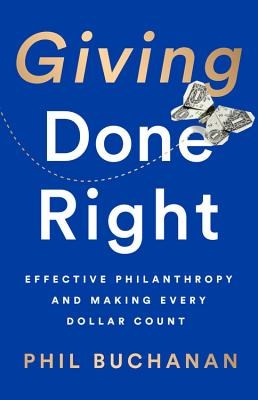