How to Break Up with Your Phone: The 30-Day Plan to Take Back Your Life

For those of us that spend too much time looking at our phones and not enough time looking at each other, Catherine Price's newest book is here for us and our struggle to reclaim our time IRL.

Perhaps your 2018 New Year's resolution was a digital detox. Maybe your family has agreed to put away phones on Sundays. Or maybe the latest news has you pondering deleting your Facebook account. Whatever the impetus, many of us are coming to terms with the fact that we spend far too much time looking at our phones and not enough time looking at each other. Catherine Price's newest book, which came out last month, is here for us and our struggle to reclaim our time IRL. This excerpt from the first chapter of How To Break Up With Your Phone is a great place to start.

Our Phones Are Designed To Addict Us

Whenever you check for a new post on Instagram or whenever you go on the New York Times to see if there’s a new thing, it’s not even about the content. It’s just about seeing a new thing. You get addicted to that feeling.

IT’S TEMPTING TO THINK OF smartphones as just one more technology in a long list of technologies that have freaked people out. Telegraphs, telephones, radios, movies, television, video games, even books—all caused panic when they were first introduced, and all have turned out to be less harmful than people feared.

But, while we shouldn’t be alarmist, Steve Jobs was right: smartphones really are different. They’re different in a lot of good ways, obviously. But smartphones also talk back at us. They nag us. They disturb us when we’re working. They demand our attention and reward us when we give it to them. Smartphones engage in disruptive behaviors that have traditionally been performed only by extremely annoying people. What’s more, they give us access to the entire internet. And, unlike previous technologies, we keep them near us at all times.

Smartphones are also one of the first popular technologies to be specifically engineered to get us to spend time on them. In the words of Tristan Harris, a former Google product manager who’s now working to raise awareness about how our devices are designed to manipulate us, “Your telephone in the 1970s didn’t have a thousand engineers on the other side of the telephone who were redesigning it . . . to be more and more persuasive.”

Perhaps this is part of the reason that Jobs—the man who introduced the iPhone—restricted his own children’s access to his company’s products. “They haven’t used it,” he said, when New York Times technology reporter Nick Bilton asked him if his children liked the iPad. “We limit how much technology our kids use at home.”

The same is true of Microsoft founder Bill Gates and his wife, Melinda, who didn’t give their kids phones until they were fourteen. Indeed, according to Bilton, many technology chief executives and venture capitalists “strictly limit their children’s screen time”—which he took to suggest that “these tech C.E.O.s seem to know something that the rest of us don’t.”

An increasing number of mental health experts are concluding that this “something” is the risk of addiction. This might seem like a dramatic term to use, given that we’re talking about a device, not a drug. But not all addictions are to drugs or alcohol—we can get addicted to behaviors, too, such as gambling or even exercise. And addictions exist on a spectrum; it’s possible to be addicted to something without it destroying your life.

Addiction can be defined as continuing to seek out something (for example, drugs or gambling), despite negative consequences. In his book The Brain That Changes Itself, Canadian psychiatrist Norman Doidge explains the general characteristics of addiction like this: “Addicts show a loss of control of the activity, compulsively seek it out despite negative consequences, develop tolerance so that they need higher and higher levels of stimulation for satisfaction, and experience withdrawal if they can’t consummate the addictive act.”

That certainly would seem to describe the way many of us feel about our smartphones. And indeed, many technology companies themselves seem comfortable with the term (case in point, a 2015 Consumer Insights report from Microsoft Canada that featured a full-page infographic with the heading “Addictive Technology Behaviors Are Evident, Particularly for Younger Canadians”). But if you don’t like the word addiction, that’s fine—you can call it whatever you want. The point is that many of the same feel-good brain chemicals and reward loops that drive addictions are also released and activated when we check our phones.

The point is also that revolutionary technologies don’t just “come along,” as Jobs put it; they’re designed. Not only are phone and app companies aware of their products’ neurological effects, but they pack their products with features that will trigger them—with the explicit goal of getting us to spend as much time and attention as possible on our devices. In industry terms, this is called “user engagement.” Why do companies care so much about engagement? Because, as we’ll talk about in more detail in a bit, it’s how they make money.

This is not to suggest that tech companies are out to deliberately hurt people (on the contrary, many of the people who work at them affirmatively want to make the world better), and it’s important to note that the features that make smartphones potentially problematic are the same features that make them easy to use and fun. Take away the possibility of getting hooked, and you’d take away all the reasons we like smartphones to begin with.

Nonetheless, the fact that so many tech executives limit their own kids’ exposure suggests that they don’t think the benefits always outweigh the risks—to the point that they feel the need to protect their families from the devices that they create. It’s the Silicon Valley version of the drug dealer’s adage: “Never get high on your own supply.”

Excerpted from How To Break Up With Your Phone Copyright (c) 2018 by Catherine Price. Published by Ten Speed Press, an imprint of Penguin Random House LLC.

Catherine Price is an author and science journalist whose articles and essays have appeared in The Best American Science Writing, the New York Times, Popular Science, O, The Oprah Magazine, the Los Angeles Times, the San Francisco Chronicle, Washington Post Magazine, Slate, Parade, Salon, Men’s Journal, Self, Mother Jones, and Health magazine, among others. Her previous books include Vitamania: How Vitamins Revolutionized the Way We Think About Food and 101 Places Not to See Before You Die.

A graduate of Yale and UC Berkeley’s Graduate School of Journalism, she’s also a recipient of a Middlebury Fellowship in Environmental Reporting, a two-time Société de Chimie Industrielle fellow at the Chemical Heritage Foundation, an ASME nominee, a 2013 resident at the Mesa Refuge, a fellow in both the Food and Medical Evidence Boot Camps at the Knight Science Journalism Program at MIT, and winner of the Gobind Behari Lal prize for science writing. You can learn more about her and her work at catherine-price.com. 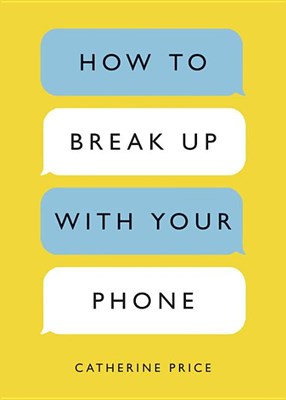 How to Break Up with Your Phone: The 30-Day Plan to Take Back Your Life