Make it Matter: How Managers Can Motivate by Creating Meaning

Scott Mautz asks us "Do you matter at work?" and teaches managers how to make sure their employees feel they do. We missed Scott Mautz's book, Make it Matter: How Managers Can Motivate by Creating Meaning, when it was released in March.

It is the only business book I've ever seen that carries an endorsement from James Patterson—the James Patterson—who in addition to being one of the most successful authors of our times, was once the CEO of JWT North America and has this to say of the book.

Make it Matter should matter to anyone who manages other people in any kind of business. The ideas within were key for me when I was running J. Walter Thompson North America—only I hadn't thought it through nearly as clearly as Scott Mautz.

Mautz begins the book with one vital question...

DO YOU MATTER AT WORK?

The question isn’t do you earn your paycheck, or are you good at what you do.

Does the work you do uniquely make a difference to your company and to others—and does it matter to you?

Far too many of us feel our hours at work don’t count. While our plates may seem full, our lives may not. As a result, many of us simply disengage at some level. Gallup research found that 71 percent of American workers can be coded as either “not engaged” or “actively disengaged” in their work, meaning they are emotionally disconnected from their workplaces and are less likely to be productive.1 “Actively disengaged” can even mean that workers are undermining their ­workplace environment with negative attitudes and behaviors that amount to sabotage (we’ve probably all run into at least one of these people).

Other studies on workplace engagement have come to similar conclusions. The Conference Board’s 2014 survey indicates that only 47.7 percent of Americans are satisfied with their jobs, down from 61.1 percent when the survey was first conducted in 1987, and a study by the BlessingWhite research company showed alarming disengagement ­levels in workplaces around the world. Towers Watson further indicated that “businesses appear to be at a critical tipping point in their ability to maintain engagement over time.”

Surely, though, at the highest levels of a company, the executive level, where salaries are stratospheric in some cases, the problem of disengagement doesn’t exist, right?

Not the case. While engagement does increase as you move higher up the company chain, a full 41 percent of those at the executive level cannot be coded as engaged, according to BlessingWhite. The impact on the workplace is obviously detrimental: As the report points out, “One dead battery will not jump-start another.”

Surely, this problem exists primarily among the less educated workers, those with a high school diploma or less who are making less money or might be laboring in less stimulating jobs—right?

Again, this is not the case. Those with at least some college education are significantly less likely to be engaged in their jobs than are those with a high school diploma or less.

Surely the problem exists primarily in smaller companies that don’t have the financial resources to combat the sense of malaise, true?

This is another misconception. Leigh Branham and Mark Hirschfeld, authors of Re-Engage, found a direct correlation between company size and engagement—the larger the company size the lower the level of reported engagement. While smaller employers still suffer from disengagement issues, they are better able to maintain the connective power between the rank and file than companies that have grown substantially in number of employees.

The provision of meaning is the solution for disengagement.

In fact, William Kahn, professor of organizational behavior at Boston University, has drawn a direct link between meaningfulness and engagement.

Kahn conducted a study among counselors/instructors at an adolescent summer camp in the West Indies, seeking to understand the conditions in which people psychologically engage or disengage in work. Kahn’s theory was that people make choices to input or withdraw degrees of themselves in their work roles. In general, people like to bring their preferred selves into their roles. He described a scuba instructor camp counselor who put great energy and care into instructing students to dive and who experienced a deep sense of personal engagement. The scuba instructor had chosen to invest physically (“darting about checking gear and leading the dive”), cognitively (“with vigilant awareness” of his divers, the weather, and marine life), and emotionally (“in empathizing with the fear and excitement of the young divers”). He expressed himself and his love of the ocean (and desire for others to love it as well) by talking about the wonders of the ocean, steering boat drivers toward minimally invasive routes around vulnerable coral reefs, and showing his playfulness and joy underwater. The instructor connected with others and with a task that deeply tapped what was important to him, and in so doing he was expressing a preferred self.

This scuba instructor contrasted with a highly disengaged windsurfing instructor who had withdrawn physically (sending students out and “just laying around”), cognitively (“not telling them much or helping them out much”), and emotionally (“being bland, superficial, and talking in unemotional tones”). The windsurfing instructor’s withdrawal and disengagement kept her from connecting with others and the task at hand in a manner that was congruent with the expression of her preferred self.

Why such a stark difference between the level of engagement of the two instructors?

It came down to the absence or presence of meaning in the work.

Kahn discovered three psychological conditions that drove people to engage, expressed as three questions that people seem to subconsciously ask themselves before choosing whether to fully engage. Two of these questions speak to very basic human needs. The first: How safe is it for me to personally engage—that is, are there negative consequences to self-image, status, or career for personally engaging? The second question: Am I available to engage—do I have the physical and emotional energy to personally engage, distraction-free? The third question was by far the most important and powerful: How meaningful is it for me to bring myself into this task—and will I receive a personal return on investment?

Therein lies a fundamental human truth. Christopher Bartlett from Harvard Business School has said, “People don’t come to work to be number one or number two, or to get 20 percent return on assets; they come to work to get meaning from their lives.” They come to work looking to get a very personal return on investment.

In fact, 70 percent of us are experiencing a greater search for meaning at work than in life. And when work has meaning it drives the expenditure and investment of discretionary energy on a physical, cognitive, and emotional level. The investor enjoys a personal return, a feeling. It’s the feeling that you matter and are making a difference; your engagement is paying off.

Sadly, too many people aren’t investing enough of their energy to yield a decent return for themselves, their company, or anyone. It is the direct effect of a crisis of meaning.

A shocking number of people sadly accept their fate at work. They are effectively quitting and staying—settling for a paycheck, abandoning hope of finding fulfillment in their jobs, and knowing in their heart of hearts that they aren’t performing anywhere near their maximum potential.

So we try throwing money at the problem. We ask for more pay in an attempt to get the feeling of emptiness to subside, and maybe we get it. But it’s not that simple (as we all intuitively know). If all it took was money, then lottery winners would stop working. However, a pool of sociological research known as “The Lottery Studies” indicates the exact opposite; the large majority of big lottery winners choose to keep working.11 The daily pursuit of meaning at work is a powerful draw. More powerful than the draw of a lotto-ball, it turns out.

Managers with the best intentions try a variety of tactics to ultimately elevate performance. We staff up. We spend more on technology to get better, cheaper, faster performance. We cut costs and corners to squeeze out better financial performance. We invest in better surroundings, better workplace facilities.

And yet a lack of engagement and fulfillment in the workplace rages on.

So employees try to take it into their own hands. Perhaps they drift into the bookstore with a gnawing sense that something is missing in their work lives. They line up to spend their hard-earned money for wisdom on how to elevate their game, how to get their mojo back. They are faced with a wall of mastery books cajoling them to Lead Better! Execute Better! Innovate Better! Or perhaps they attend a training or seminar here and there looking for a dose of inspiration. And perhaps one of these mechanisms helps, for a little while.

But it doesn’t last. And so the void of fulfillment and disappearance of personal excellence accordingly follow suit. This absence of meaning can lead to resignation and withdrawal. Given that adults spend more than half their waking life at work, we deserve better.

Simply put, meaning is the performance enhancer of our times. And by the way, it’s free.

Excerpted from Make it Matter: How Managers Can Motivate by Creating Meaning by Scott Mautz, with permission of AMACOM, a division of American Management Association.
Copyright &mcopy; 2015 Scott Mautz.
All rights reserved.

Scott Mautz is a 20+ year veteran of Procter & Gamble, having run several thriving, multi-billion dollar divisions alsong the way. He's also a speaker and consultant on may facets of meaning-making leadership. He lives in Cincinnati.
Connect with Scott at www.scottmautz.com. 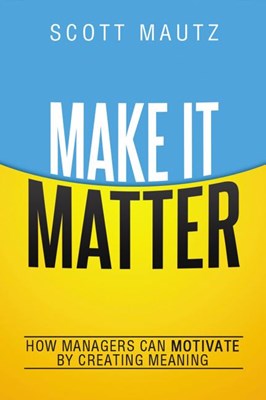 Make It Matter: How Managers Can Motivate by Creating Meaning