Rodolphe Durand Jean-Philippe Vergne by Rodolphe Durand & Jean-Philippe Vergne Kim Dotcom and his company Megaupload have just crossed over to the dark side. What can we learn from this contemporary pirate’s tale? Once a hard-working employee for well-established companies, Kim Dotcom became a crook, stealing for his own good whilst the State desperately tried to make new legislations to prevent file sharing from proliferating.

by Rodolphe Durand & Jean-Philippe Vergne Kim Dotcom and his company Megaupload have just crossed over to the dark side. What can we learn from this contemporary pirate's tale? Once a hard-working employee for well-established companies, Kim Dotcom became a crook, stealing for his own good whilst the State desperately tried to make new legislations to prevent file sharing from proliferating. Just like in a regular TV series, in the end the FBI stepped in to forcibly question Pirate Dotcom on the island where he had found refuge. The FBI also stopped to lay up the vessels of his computer-geek fleet. After Napster did it for music, Megaupload stirred things up with the diffusion of TV programs and films, posing questions about laws regarding intellectual property and the exchange of cultural contents. Indeed, recent events are beginning to show signs of a recurring motif in economic history. With each great capitalist revolution—orchestrated by States that impose their norms on property and exchange in the name of their sovereignty—we see a new corresponding form of organized piracy emerge, whether it is in the sea, via radio waves, or on the internet. This constitutes a historical motif that is essential to capitalist dynamics and that penetrates a whole collection of peripheral, dissenting and innovative organizations at the heart of State-Company relations. In effect, the actions of pirate organizations highlight the evolution of capitalist societies ever since the Americans made their very first discoveries. Indeed, with every industrial revolution, sovereign States have either granted or passively allowed monopolies to bloom in order to control the economic flux generated at the heart of new capitalist territories (e.g. the monopoly of Western Companies in the Indian Ocean, of AT&T in telecoms, of Microsoft and Google in new technologies). Pirate organizations are consistently challenging this state of affairs. In the latest movement, certain "pirates" have chosen to return to the legal spheres, finding jobs at the heart of the very States or companies that they once threatened. They have become "corsairs." This "corsairisation" of pirates is one of the most powerful sources of economic and social change. The pirates of the seas in the 17th Century fought against the monopolization of the companies of the Indies and yet every country in Europe warmly welcomed pirates that had become corsairs in order to thwart the exchanges of their rivals. Pirate radio stations at the start of the 20th Century were transmitted over the airwaves evading all state authorization, but after the war they were swiftly incorporated onto the radio broadcasting scene. Hackers and computer pirates on telephone networks and on the internet are constantly challenging program censors operated by the giants of the sector. However, the best hackers in fine either succeed in creating their companies or end up being hired by Microsoft and Google. Kim Dotcom pushed the boundaries of the law several times. Perhaps this time definitively as he seems to have sunk to the depths of robbery, rather than rising to the spirit of piracy. Thus, there can be no capitalism without sovereignty and without rules. But equally, if we allow the regulation of territories and the normalization of exchanges to continue to surface, then even more spaces will be created for pirate organizations to nestle into. Some pillage and plunder, others radically innovate, and some even do both at the same time. The challenge lies therefore in unearthing and "corsairising" the initiators of radical innovations by fighting the thieves. Of course, this is a difficult decision to make, but recent cases have shown that sometimes even companies and States can miss the mark and reject the very innovations that are most in line with society. The Megaupload affair highlights the importance of rethinking laws on intellectual property and on the creation and distribution of cultural goods. Another key issue lies in our incapacity to think of economic evolution in a more inclusive way. Perhaps one way of resolving this could be by actually trying to work with the pirates who push the limits of capitalism with their radical innovations that promote new modes of exchange and embody new values?

Rodolphe Durand is the GDF-Suez Professor of Strategy at HEC Paris. In 2010 he received the European Academy of Management's Imagination Lab Foundation Award for Innovative Scholarship. His work has been published widely in academic journals.

Jean-Philippe Vergne is an assistant professor of strategy at the Richard Ivey School of Business at the University of Western Ontario. His ongoing research on the global arms industry received the inaugural Grigor McClelland Doctoral Dissertation Award in 2011.

Rodolphe and Jean-Philippe recently published The Pirate Organization: Lessons from the Fringes of Capitalism on Harvard Business Review Press. 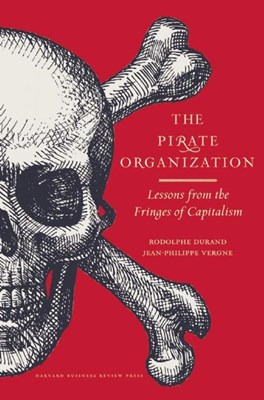 The Pirate Organization: Lessons from the Fringes of Capitalism