In his new book, Bradley R. Staats explains how one of the keys to life-long learning is simply being true to yourself. Teachers, veterinarians, real estate agents, and architects are just a few of the professions for whom continuing education is part and parcel of maintaining their license to work. They attend conferences or take online classes to stay current on the latest developments in their fields, such as Introduction to Forestry Education for the K-12 Classroom, Brave New World of Feline Flea Control, Wisconsin Investment Property and Property Management, or Coastal Resilience: Strategies Addressing Sea Level Rise in Historic Districts. But for many of us, we can go months or years without refreshing our industry knowledge. And as the world around us keeps changing at an ever-increasing pace, that lack of structured learning is not good for our careers. "If we fail to learn, we risk becoming irrelevant," explains Bradley R. Staats of UNC's Kenan-Flager Business School. "We end up solving yesterday's problems too late instead of tackling tomorrow's problems before someone else does." The problem is, for many of us, learning doesn't come naturally, for a myriad of reasons. In the excerpt below from Chapter Six of Never Stop Learning: Stay Relevant, Reinvent Yourself, and Thrive, Prof. Staats explains how one of the keys to life-long learning is simply being true to yourself.

Being Yourself to Learn

I am sorry to say that Peter was not
very well during the evening.

His mother put him to bed, and made some
camomile tea; and she gave a dose of it to Peter!

“One table-spoonful to be taken at bed-time.”

But Flopsy, Mopsy, and Cotton-tail had bread
and milk and blackberries for supper.

In the children’s tale Peter Rabbit, Peter’s mother warns him and his sisters to stay away from Mr. McGregor’s garden. She then heads out to the bakery as Peter’s three sisters, Flopsy, Mopsy, and Cotton-tail, who, we are told, are “good little bunnies,” head off to collect blackberries. Peter, the rebel, goes to Mr. McGregor’s garden, where adventure ensues. He eventually escapes but loses his new jacket. On returning home, he is given medicine and sent to bed while his three rule-following sisters are rewarded with bread, milk, and blackberries.

We’re taught the lesson of Peter Rabbit repeatedly, not only during our young lives but also as we get older and join organizations for work: fit in and follow the rules. By being “good little bunnies” who follow the norms and rules of others, we conform and meet expectations. We see benefits from this, both in how others treat us and in the lowering of our own stress and anxiety—thus we may view it as a win-win. But although we think we need to act like others, doing so can limit our ability to learn.

In her first job after graduating from Harvard University, Leila Janah chose to follow a typical Harvard undergraduate’s route—she went to work for a management consulting firm. Before that, her path had been anything but typical. As a seventeen-year-old, Janah won a scholarship that permitted her to teach English to young students in Ghana. The experience opened her eyes to the immense challenges of development in a third-world country.  During  her  visit she saw a talented and energetic people; describing the visit, she said, “I left Ghana wondering how a country so rich in human capacity could be so poor.” As a teenager, she knew that someday she would help address this imbalance, though she was not sure how.

To learn how, she studied economic development as an undergraduate. She focused on Africa and took a year off to work at the World Bank, helping with the fight against global poverty. Although she found the efforts of the organization well-intentioned, she didn’t understand why it wasn’t exploring different approaches, because many of its initiatives made only limited progress. Believing that the standard nonprofit model was unlikely to address the problems she sought to solve, she decided to move into the for-profit world.

During her time in consulting, she felt like a misfit. The work was intellectually stimulating, but it lacked social impact. Janah found herself at a crossroads. She had a job that many people envied, but she knew she couldn’t accomplish her true goals there. She’d learned that nonprofit approaches had limited impact and for-profit organizations were typically unwilling to address the problems she was interested in. She decided to make a leap into the unknown. She quit her job and took a position as a visiting scholar in the Program for Global Justice at Stanford University.

She realized that a promising answer to her question—How can I meaningfully reduce global poverty?—came in pieces from the diverse experiences she’d had. She decided that if she could connect developing-market workers with developed-market work, she could address what she thought of as “the greatest ethical battle of our time: disparity in access to opportunity to work.”

Janah launched a company named Samasource. (Sama means “equal” in Sanskrit.) The concept was simple: contract with leading companies such as Google, Yelp,  and Getty Images for digital work, such as confirming addresses for restaurants or tagging pictures with the names of celebrities, and then source the work in a developing market such as Ghana, Kenya, or India, taking advantage of internet- connected computers. Donations and grants would provide the seed and growth capital for the company, while profits would fund ongoing operations.

If the idea was simple, the execution proved anything but. Janah had to persuade major corporations to engage in such activity, funders to provide large amounts of capital for a new model, and employees to work for a nonprofit instead of the next Google or Facebook. The company also had to set up delivery networks in the developing countries and train new workers—an enormous learning task.

Through it all, Janah carved her own unique, authentic path, as her experiences and curiosity pushed the organization into new areas. By 2016 she had sourced millions of dollars’ worth of work to developing countries and had had a positive impact on thousands of workers and tens of thou- sands of dependents. Building on her success, she launched initiatives to target disadvantaged workers in the United States along with LXMI, a luxury beauty brand that sources rare inputs from women in developing markets and sells its products both online and in Sephora stores.

By being true to herself and forging her own path, Janah began and continues on a remarkable learning journey. Instead of following the rules, like Flopsy, Mopsy, and Cotton-tail, she embraced her inner Peter Rabbit. When it comes to learning, this is exactly right (even if we are dosed with foul-tasting medicine and sent to bed). Being yourself leads to learning.

Bradley R. Staats is an associate professor of operations at the University of North Carolina's Kenan Flagler Business School. His research examines how individuals, teams, and organizations can learn to improve their operational performance to build a competitive advantage, integrating work in operations management and organizational behavior to clarify how and under what conditions individuals, teams, and organizations can learn at their best. His work has been featured in a variety of media outlets, including Fast Company, The New Yorker, Financial Times, The Wall Street Journal, and NPR. 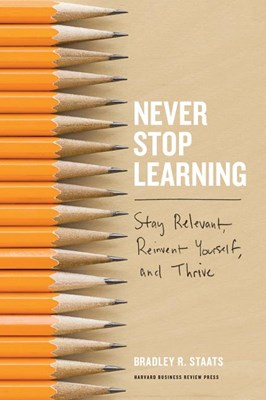