Next Is Now: 5 Steps for Embracing ChangeBuilding a Business that Thrives into the Future

Lior Arussy, in this excerpt from his new book _Next Is Now_, discusses "The Secret to Employee Engagement." If you read a lot of business books, you're bound to come across similar anecdotes, case studies, surveys, and statistics from time to time. But nothing is cited more often than Gallup's employee engagement surveys and the resulting State of the American Workplace report, and the picture it paints is as consistently woeful as it is constantly cited.

Lior Arussy and his team at Strativity developed their own survey to study the issue, and Arussy offers insight and remedies to the problem in his new book, Next is Now. We have received permission to share a piece of that with you here.

The Secret to Employee Engagement

In May 2016, Strativity launched a nationwide study of 30,183 adults, employed full- or part-time, in an attempt to better understand employee engagement. We gave participants a list of statements in order to explore what factors played the biggest role when it came to engagement at work—and, by extension, their readiness and willingness to change and adapt. (From previous work, we had already learned that engaged employees demonstrate a greater willingness to adapt to change.) Here’s what we discovered:

As bad as the scores were, what else we discovered about them might surprise you: none of these factors had any clear correlation to engagement—or lack thereof.

In fact, each of the needs expressed in the above statements was perceived by employees to be a basic requirement. So what else could be responsible for engagement? Education, or income level? Think again. Neither had any link to engagement.

As it turned out, the strongest correlation to engagement was demonstrated by three statements that comprise what we call the Impact Index:

When people are inspired to act, understand the need they are addressing for their customer, and have their role in making an impact clearly communicated, they are ready to make a difference.

In other words, people demonstrate the highest engagement not when their personal needs are being met, but rather when they feel empowered to make an impact and help others. People in our study felt most engaged when they were doing something meaningful with a clear impact on a real human being.

An organization that provides its employees with the tools to make a real impact on people’s lives is the company that will have the most engaged employees. When employees say they receive the support to deliver exceptional customer experiences, what they are really saying is:

“There are people who need me.”

“I am not helpless.”

“I can perform to the highest (exceptional) level.”

This surprising finding was reinforced by the fact that employees who interacted directly with customers demonstrated a higher level of engagement than their colleagues (48 percent compared to 37 percent).

When working with a client in the automotive industry, we saw this problem firsthand. Technicians were consistently the least-engaged group in the entire organization. The nature of their work requires them to focus on fixing cars, which leaves minimal time for face-to-face interaction with customers.

While the technicians felt that they needed more support and tools, we suspected the lack of customer contact was the real issue. At first, the dealership’s owners opposed the idea of allowing the technicians to speak to or meet with customers. The owners believed it would disrupt the process, and that only service advisors should speak to customers.

But they agreed to a pilot program to test the idea: once a week each technician would join the 5 p.m. service drive—their role would be simply to thank customers for the opportunity to service their cars.

This simple act delivered amazing results. The technicians felt appreciated. For the first time, they were able to see the gratitude in the eyes of the customers. Allowing them to speak to customers gave their work greater meaning and provided them with a sense of empowerment. It helped them realize that they were not moving metal, they were moving people.

Their work was valuable.

Engagement Driver #1: Give people the power to have an impact on someone else’s life.

Not long ago, I reviewed a training material for a logistics company. In the 137-page document, the word customer appeared only seven times. The topic of the correct angle at which to hold the keys as a driver picked up a package, however, was thoroughly discussed and documented.

It was evident from the manual what mattered to the company: process. Employees were not encouraged to deliver exceptional customer experiences (unless, of course, it had to do with holding their keys at the designated angle!).

When an employee is trained at that level of granularity to submit and accept, he will not have any room left for change resilience—or for the customer. The customer was referred to as a recipient or a shipper but not treated as a human being with needs.

Employees were referred to as an integral part of the process, but were expected to behave in a predictable one-size-fits-all way.

Only when employees feel that they are empowered to do what is right will they feel engaged. The company defined its employees as process operators and never bothered to show them how their work made a difference. It failed to contextualize the work and robbed the employees of understanding the impact of their work.

Engagement Driver #2: Put customers at the center and empower people to serve them.

True or false: If managers are engaged, then their employees will be too.

While our study conducted in conjunction with Harvard Business Review revealed that communication is an issue between senior executives and employees, it is not the only issue. There is a real disconnect when it comes to ownership. In most cases, senior leadership creates change programs and dictates strategies around change. Employees are just expected to jump on board.

We recommend a fundamentally different approach: one that puts employees in the driver’s seat. We train them to face the facts just as their CEO would, enabling them to make their own decisions and own the outcome.

Engagement Driver #3: Give employees personal ownership of the strategy.

If you’re a manager and you want engaged employees, you need to give each and every employee ownership over the strategy, as well as the tools, training, and authority to execute it. You also need to give every employee—even the technicians—ample face time with customers.

Reprinted from Next Is Now by Lior Arussy.
Copyright © 2018.
By permission of Simon & Schuster.
Available wherever books are sold.

Lior Arussy is the founder of Strativity Group and one of the world’s leading authorities on customer experience and customer-centric transformation. Many of the world’s top brands work with him to drive successful change efforts: Mercedes-Benz, Royal Caribbean Cruises, Thomson Reuters, HSBC, E.ON, FedEx, SAP, University of Pennsylvania, and Johnson & Johnson, among many others. In addition to his work with Strativity, Lior is the author of Exceptionalize It! He’s written over 250 articles for publications around the world, including the Harvard Business Review and has been featured in a multitude of magazines and media outlets including MSNBC, CNBC, Bloomberg TV, The Wall Street Journal, and Fast Company. 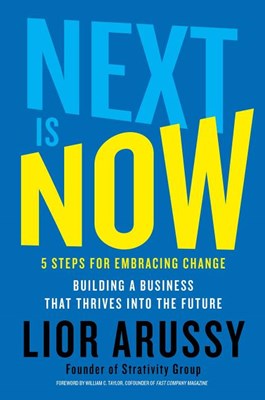 Next Is Now: 5 Steps for Embracing Change--Building a Business That Thrives Into the Future