An Excerpt from Ordinary Heroes: A Memoir of 9/11

From Chief Joseph Pfeifer's memoir of 9/11 and its aftermath, the following excerpt explains what he experienced in the moments after the towers collapsed.

Joseph Pfeifer was the first FDNY chief on the scene as the attacks on the World Trade Center unfolded. He was in downtown Manhattan that morning to investigate a potential gas leak and witnessed the first plane, American Airlines Flight 11, crash into the North Tower. Alongside him was Jules Naudet, a filmmaker who was there with his brother Gédéon working on a documentary about the members of the Engine 7, Ladder 1 firehouse in Lower Manhattan. As Pfeifer writes in his new memoir, Ordinary Heroes:

Jules had been the only cameraperson in the world to capture that singular, horrific moment. The terror was engraved in my mind forever, even without film to prove it had happened.

But the terror didn’t end there. From his book about the events of that day and their aftermath, the following excerpt, from Chapter 6, explains what happened to the pair in the moments after Pfeifer threw himself on top of Naudet to protect him as the towers collapsed.

This beautiful summer morning, so filled with bright sunshine, turned pitch black from the dust. In total darkness I bargained with God to see my family again. Then there was complete silence. It was like that muffled quiet after a first snowfall. For a couple of seconds, I wondered if I was still alive. 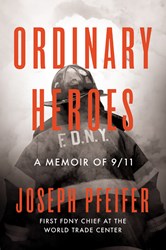 After a few moments I stood up, covered head to toe in gray dust. I couldn’t catch a breath of air without coughing. My eyes burned. I spat to clear my throat.

“Are you okay?” I asked Jules.

Jules struggled to his feet, realizing for the first time I was the one who had been on top of him. Except for scrapes and bruises, he was uninjured but also coated in gray gunk. His camera was apparently intact. He brushed debris from the lens and realized he was still filming.

Suddenly, we heard a staccato pop pop pop from across the street—the unmistakable sound of gunfire.

“Get down! Get down!” I yelled to Jules. Again, we ducked behind a vehicle. I was afraid not only for myself, but for Jules. We had barely survived and now someone was shooting at us? Were there terrorists on the streets with guns?

A few moments passed. We again got to our feet. To our relief, we realized a police officer had shot out a plate glass window in the office building across the street, trying to get inside to escape the suffocating

Jules and I found a small coffee shop on Vesey Street employees were handing out water bottles to firefighters, and anyone who needed it. Everyone was dazed; some were injured. I drank but had trouble clearing my throat.

The wind picked up and started to clear the air. Back out on the street, I looked toward the World Trade Center and saw a surreal mountain of destruction: twisted steel beams, pulverized concrete, smashed glass, and huge pockets of flame, all covered a murky haze of smoke and dust.

For the first time, I realized that both towers had completely collapsed. The buildings were not hiding behind the smoke. They no longer existed. Though it was the second skyscraper to be hit, the South Tower had disintegrated first in fifty- six minutes, followed twenty- nine minutes later by the North Tower’s collapse. As each Twin Tower pancaked from the top down, they destroyed everything beneath them, including the Marriott Hotel and surrounding buildings. Most of the sixteen-acre complex had been utterly demolished.

My mind reeled in disbelief. I tried to take it all in but could not. I had landed in a war zone. With fires burning everywhere, it looked like the whole world was on fire. The nightmare had unfolded in just 102 minutes, from the airplane hitting the North Tower at 8:46 a.m. to its collapse at 10:28 a.m.

Questions flooded my thoughts. How many people had we lost? I had sent a couple of hundred firefighters up those staircases. Had any of them survived? Where were my brother and Engine 33? Where were Engine 7 and Ladder 1? What about all the other units I’d ordered to evacuate?

Jules and I walked toward the burning piles of debris. Dozens of rigs had been destroyed. Dazed, injured people coated in powder staggered around like apparitions. First responders were on their knees, sifting through rubble. It looked, as Jules put it, like the “gateway to hell.”

Jules was desperate to know what had happened to his brother. He believed Gédéon had gone up in the North Tower with Tony. They usually rode in Engine 7 together. It made sense that they’d come with us to the odor of gas call, though I didn’t recall seeing either of them in the lobby. But I had been extraordinarily busy.

“I’ve got to find my brother,” Jules said. “If you don’t mind, I’m going home.” Weary, coughing, crying, he began to walk back to the firehouse, asking every firefighter he saw, “Have you seen anyone from Engine 7 or Ladder 1?”

I knew Gédéon also would be worried about Jules. I thought of Kevin and the other firefighters I had told to go up stairwells— especially those from my firehouse—and then ordered to evacuate. Had they heard me? Where were Captain Tardio, Lieutenant Walsh, and their firefighters? They’d been among the first to go up inside the tower.

Heartsick, I pictured my brother’s calm face as he headed toward his assignment. I fought to gain control of my fear and anxiety, to figure out what to do. Nothing I had ever experienced gave me any guidance. I had never felt so helpless.

I tried to call Kevin by radio, “Battalion 1 to Engine 33,” and heard no answer. Radio traffic was cluttered, so it would not be unusual for him not to answer me. I assumed he would show up, and there was a lot to do.

Excerpted from Ordinary Heroes: A Memoir of 9/11 by Joseph Pfeifer in agreement with Portfolio, an imprint of Penguin Publishing Group, a division of Penguin Random House LLC. Copyright © Joseph Pfeifer, 2021.

Joseph Pfeifer retired from the New York City Fire Department in 2018 as an assistant chief and the founding director of FDNY’s Center for Terrorism and Disaster Preparedness. During his thirty-seven-year career, he commanded some of the most significant emergencies in New York City’s history, including the World Trade Center attacks on September 11, 2001, the Superstorm Sandy fire in 2012, and the Ebola crisis in 2014. Pfeifer is currently a senior fellow at the Harvard Kennedy School and the Combating Terrorism Center at West Point, and the director for crisis leadership at the National Center for Disaster Preparedness at Columbia University. He holds master’s degrees from the Harvard Kennedy School, the Naval Postgraduate School, and the Immaculate Conception seminary. Joseph lives in New York with his wife, Ginny.

There is still a lot to do. Jules would find Gédéon, but Chief Pfeifer lost his brother Kevin that day. The book jacket tells us how:

Through his eyes, we see the horror of the attack and the courage of the firefighters who ran into the burning towers to save others. We see him send his own brother up the stairs of the North Tower, never to return. And we walk with him and his fellow firefighters through weeks of rescue efforts and months of numbing grief, as they wrestle with the real meaning of heroism and leadership.

This gripping narrative gives way to resiliency and a determination that permanently reshapes Pfeifer, his fellow firefighters, NYC, and America. Ordinary Heroes takes us on a journey that turns traumatic memories into hope, so we can make good on our promise to never forget 9/11.

This past weekend marked the twentieth anniversary of that day. My wife and I turned on the television Saturday morning and watched family members of those who died at the World Trade Center on 9/11 read their names aloud, a process that takes hours due to the scale of the loss we endured as a country that day. We took take time to explain to our young children why we were intermittingly tearing up during the process, and what happened that day. I can’t imagine how hard it has been for those family members, some of whom were children of the fallen, some who stated that they were 20 years old now, meaning they were either just born or about to be born when they lost their parents. Similarly, Pfeifer’s book is not always easy to read (nor was last night’s episode of 60 Minutes remembering 9/11, which he was on, easy to watch). It contains a lot of horrific scenes and hard moments. But it is important to remember, and in the end the book is uplifting, a reminder that the cloud of darkness does eventually lift, and that there is work left to do even after it does. It is about the ability to do “ordinary things in extraordinary times,” the importance of community, and how “Even when our whole world is on fire, we have each other.” If we can remember that as we remember that day, as we get back to work facing the challenges of today, we will be better off. 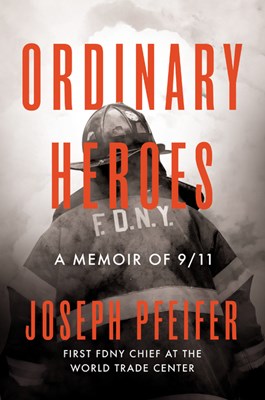