Neel Doshi and Lindsay Mcgregor explain how "How Whole Foods Can Weather The Current Storm" by doing more of the same.

Neel Doshi and Lindsay Mcgregor are McKinsey alums that went on to found Vega Factor, "a company building technology to help organizations of all sizes and in all sectors create high performing cultures." They also have a book being released from HarperBusiness today. Entitled Primed to Perform: How to Build the Highest Performing Cultures Through the Science of Total Motivation, we have an excerpt that will explain exactly…

How Whole Foods Can Weather The Current Storm:
Don’t Change. Do More Of The Same.

Between mislabeling weights and the announcement of 1,500 layoffs, darling specialty-grocer Whole Foods has suffered consecutive blows within a few weeks. The company is at a crossroads, and the big question is whether its long-celebrated culture will weather this perfect storm of slowing growth and fiercer competition.

Most companies at this stage of increased volatility unknowingly double down on performance-destroying practices; they introduce more rigid processes, cost reduction programs and performance management systems in order to squeeze the last drops of productivity from employees and revenue from customers. But precisely as things become less predictable, people and organizations must be more adaptive to appropriately respond to problems and find opportunities where there were previously none. Our new research proves that adaptability is what separates the highest performing organizations from the rest of the pack.

Adaptive organizations are the product of adaptive people—at every level, and people are their most adaptive when they work for the right reasons. An intuitive understanding of this phenomenon we call total motivation is what has ferried Whole Foods to its storied success, as outlined in the excerpt below. If the company can resist the siren call of predictability, it will also be what gets it through this storm.

“Most organizations—even legendary ones—have a hard time building, maintaining, and strengthening their cultures. Absent a systematic, psychologically informed understanding of culture, their leaders have relied on intuition and replication. They have tried to copy Apple, Southwest Airlines, Zappos, or the Ritz-Carlton, only to find that the cultures they built weren’t consistent and didn’t feel genuine. They didn’t motivate in the right ways, so they didn’t stick.

Total motivation is the missing link.

Many of the most admired organizations already use components of total motivation (ToMo) intuitively. They understand that the best way to motivate people is not through rewards or threats, but by inspiring people to find play, purpose, and potential in their work.

We found evidence of this one evening in Boston on the T (the local train), where two men in their twenties were discussing how to grow their business. One of them was dressed smartly in khakis and a polo shirt. The other sported a fashionably untucked button-down and a week-old beard, expertly groomed to look ungroomed. They spoke passionately about how their personalized customer service made all the difference to their bottom line. They devised plans to visit their competitors, to ferret out their tactics and weak spots. These two men weren’t tech CEOs or members of the hottest start-up incubator. They were employees at a local Whole Foods Market grocery store. They wore their Whole Foods hats with pride, and reveled in working for the only store in their neighborhood that still hand-stacked produce.

This really happened. There was no boss standing over them cracking the whip. No talk of how much money their extra work would earn them. They were brainstorming ways to help their company on their own free time, just for the fun of it. This is adaptive performance in the flesh. And it was a direct result of the ToMo culture that cofounder John Mackey baked into his business from its very inception.

Though today it has more than 400 locations in three countries, Whole Foods Market was born in 1978 as a 3,000-square-foot natural foods store. It would be an understatement to say that John Mackey was deeply committed to his vision. He earned so little in the early days that he and his cofounder lived in an office above the store. “There was no shower or bathtub there, so we took ‘showers’ in the store’s Hobart dishwasher when we needed to clean up,” Mackey related in his book Conscious Capitalism.

Most of us know that there is something special about the culture of Whole Foods. Whole Foods is Fortune magazine’s most admired company in its industry in 2015, and has been on the “100 Best Companies to Work For” list for eighteen straight years. Yet few companies have been able to create the culture they have built. Whole Foods’ culture feels like an extension of Mackey’s personal brand of magic. The fact is, Whole Foods is total motivation incarnate. The phrase “total motivation” didn’t exist yet, but John Mackey intuitively grasped its principles from the get-go. In a 2006 open letter to his employees (or “team members,” as he calls them), Mackey describes how he wanted to work “simply for the joy of the work itself and to better answer the call to service that I feel so clearly in my own heart.” He perfectly describes play and purpose, the first two of the six motives.

Using our cultural measurement tool, we tested how much employees at Whole Foods felt each of the six motives we describe in our book. Whole Foods creates far more play, purpose, and potential (the three direct motivators) and less emotional pressure, economic pressure, and inertia (the three indirect motivators) than many of its peers. As a result, it produces triple the level of total motivation versus the average of three competitors. This high level of ToMo is what drove the two Whole Foods team members to keep thinking about their business even on their commute home, and it is also what has made Whole Foods a market leader.

Whole Foods’ total motivation advantage isn’t an accident. It is intentional. The company purposefully builds direct motives into the workplace. It increases play through store-level, self-managed teams, whose members actually get to make decisions. Each department decides who to hire and what to stock. Individual team members have the opportunity to experiment with ways to improve their performance. The company enables this decentralized decision making with unprecedented transparency. Every team knows exactly how comparable groups in other stores are performing. They even know how much everyone in the store is paid. So complete is the information that in the mid-nineties, all 6,500 team members were deemed insiders by the Securities and Exchange Commission, suggesting they had access to privileged company information.

Whole Foods increases the purpose motive through a compelling and credible mission. As Mackey and Rajendra Sisoda wrote in Conscious Capitalism, “Business has a much broader positive impact on the world when it is based on a higher purpose that goes beyond only generating profits and creating shareholder value. Purpose is the reason a company exists. A compelling sense of higher purpose creates an extraordinary degree of engagement among all stakeholders and catalyzes creativity, innovation, and organizational commitment.”

At Whole Foods, store employees feel the difference. As one team member wrote to us, “I love the company I work for. I can get behind their mission statement, attitude, work ethic, and events. My coworkers are like family to me and the company has gone out of their way to provide for and accommodate me.”

Total motivation, however, isn’t just about how employees feel. Because total motivation fuels adaptive performance, we can see its effect on how customers feel too. Great customer experience occurs when an organization adapts its approach around each individual. When we look at Whole Foods and other grocers, we can see this connection clearly in the data.”

Lindsay McGregor and Neel Doshi are co-authors of Primed to Perform, a book about the counterintuitive science behind high performing cultures, out today via HarperBusiness. They are also co-founders of Vega Factor, a startup building technology to help companies transform their cultures. Between their 20 years of professional experience, they have worked as multi-company tech entrepreneurs, McKinsey & Company consultants, an employee of Fortune 500 companies, a substitute teacher, and a married couple. They received their MBAs from HBS and Wharton, respectively. 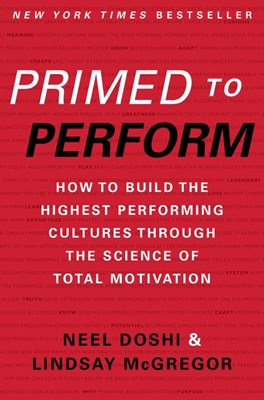