Story Driven: You Don't Need to Compete When You Know Who You Are

If you want to build a great company, a thriving entrepreneurial venture, or a fulfilling career, Bernadette Jiwa's latest book proves you don't need to compete when you know who you are. "When you have something to say, you don't need to shout. Bernadette Jiwa helps us learn how to create the change we seek to make in the world."
—Seth Godin

‘[S]uccess is like a mountain that keeps growing ahead of you as you hike it… and there’s the very real danger that “succeeding” will take up your whole life, while the big questions go untended.’

—George Saunders, convocation speech for the Syracuse University class of 2013

The story broke on 15th September 2015. It was less of a story and more of a scandal—the biggest deception ever discovered in automaking history. The United States Environmental Protection Agency had evidence that the world’s largest car manufacturer had been deliberately cheating on emissions tests for at least six years. Eleven million diesel cars that had been marketed as ‘clean’ in order to boost sales and profits had been fitted with ‘defeat devices’—software that would give compliant emissions readings under test conditions, but actually allow the cars to emit forty times the allowed amount of nitrogen oxides under normal driving conditions. Not only did these vehicles fail to meet regulatory requirements, but they also were emitting pollutants at levels considered to be harmful to public health.

As news stories spread, speculation escalated and stock prices tumbled; 40 percent ($30 billion) was wiped from Volkswagen’s value in a matter of days. VW’s CEO, Martin Winterkorn, resigned, saying that he wasn’t aware he’d done anything wrong, but he recognised that ‘millions of people across the world trust our brands, our cars and our technologies’, and he was ‘deeply sorry we have broken this trust’.

Volkswagen’s new CEO, Matthias Mueller, later explained that the emission compliance issue was a technical problem that arose because the company ‘had some targets for [their] technical engineers, and they solved this problem and reached targets with some software solutions which [weren’t] compatible [with] the American law’. This seeming lack of insight and reluctance to shoulder blame did not go down well with customers or the media, and the statement was later clarified.

The cost to VW in fines and compensation alone is estimated to be in excess of $20 billion. The reality is that the scandal cost them much more in lost reputation. The emissions fraud wasn’t the work of one person—a lapse in judgement of a lone wolf trying to meet a target. It was a systemic failure in the company, akin to a mutation in human DNA that allows a cancer to run rampant through a body. The company once known as the maker of ‘the people’s car’ had lost touch with its identity and failed its people. They had forgotten who they were.

Two weeks to the day from the breaking of the emissions scandal, the world’s first all-electric SUV, the Model X, was unveiled in California by Elon Musk, the CEO of Tesla Motors. The fledgling automaker had not yet sold 100,000 cars in its lifetime. Less than two years after the first Model X cars took to the road, Consumer Reports ranked Tesla as the top American car brand and eighth in the world. To put that achievement and Volkswagen’s material advantage into perspective, Volkswagen Group, founded in 1937, was seventh on the Fortune Global 500 list. The company produces more vehicles in two days than Tesla did in all of 2016.

Why would people at a company like Volkswagen, with virtually unlimited resources—assets of €381.9 billion, plus talent, expertise and brand equity—risk everything by taking an illegal shortcut? What enabled the smaller, less-well-resourced team at Tesla Motors to be so innovative? Apart from the obvious differences in resources and longevity, what distinguishes each of these brands from the other is the business philosophies upon which they are built.

In its 2011 annual report to shareholders, Volkswagen declared, ‘The main goal of the group’s strategy is for Volkswagen to become the economic and ecological leader of the global automotive industry.’ The company’s goal was to beat the competition and be number one. It’s clear from the report that the single bottom line was the leadership’s key driver. Volkswagen defined four objectives that would enable them to become ‘the most successful and fascinating enterprise of the global automotive industry by 2018’. Innovation, increased sales, increased pre-tax return on sales, and being a ‘top employer’ were listed as the means by which they would achieve this goal. It seems now that the desire to be innovative was only a means to an end, rather than a reason to strive for excellence. We’re left wondering where, or if, happy customers fit into their plans.

As the dust was settling on the emissions scandal, Herbert Diess, CEO of the Volkswagen brand, reiterated Volkswagen’s competitive worldview in an interview: ‘We see Volkswagen as the company that can stop Tesla, because we have abilities Tesla doesn’t have today.’ In 2017, Patrick McGee reported in The Financial Times that Diess confirmed the company’s intention to go after a big slice of the electric car market. ‘Anything Tesla can do, we can surpass’, he said. He also confirmed that Volkswagen aimed to stop Tesla from getting foothold in the market for more-affordable electric cars: ‘It’s our ambition, with our new architecture, to stop them there, to rein them in. We are confident that in this new world we will become a market leader.’

It seems that Volkswagen’s narrative and identity still centre around its targets and capabilities, the ability to dominate and the goal of being number one.

In stark contrast, the Tesla team is working towards its vision for the future. Since the brand’s inception, the company has been committed to making a contribution to the wider world. Tesla’s people have always been united around a single mission: ‘to accelerate the world’s transition to sustainable transport’. This mission was updated in 2016, changing ‘transport’ to ‘energy’. Elon Musk published his ‘secret Tesla Motors master plan’ online in 2006 for the world to see. The company’s contribution, aspirations and values inform the strategy he laid out at that time. Here’s an excerpt:

As you know, the initial product of Tesla Motors is a high performance electric sports car called the Tesla Roadster. However, some readers may not be aware of the fact that our long term plan is to build a wide range of models, including affordably priced family cars. This is because the overarching purpose of Tesla Motors (and the reason I am funding the company) is to help expedite the move from a mine-and-burn hydrocarbon economy towards a solar electric economy, which I believe to be the primary, but not exclusive, sustainable solution. …

So, in short, the master plan is:

Prior to the emissions scandal, the engineering team at Volkswagen lived in fear of being unable to meet tough innovation deadlines, while the people at Tesla were aspiring to become the company that would change the world. Ironically, in its attempt to catch up to Tesla, Volkswagen is undoubtedly helping them to realise their vision to accelerate the transition to sustainable energy.

What went wrong at Volkswagen? Why did a team of presumably smart, dedicated people, with a legacy to uphold and access to unlimited resources, lose their way? Those of us on the outside looking in will never know the exact details about the errors in human judgement that caused the crisis. But we can take a step back and see how the company’s philosophy and internal narrative shaped its identity, culture and strategy. We can learn from the mistakes of the past.

Bernadette Jiwa is a recognized global authority on business philosophy and the value of story in business, innovation and marketing and the author of several best-selling books on marketing and brand storytelling. Her popular blog was voted Best Australian Business Blog in 2012 and has featured three times on Smart Company’s Best Australian Business Blog list, topping it in 2016. Bernadette advises, consults and speaks with entrepreneurs and business leaders, from startups to Fortune 500 companies, who want to do work they’re proud of and create the future they want to see. Her work takes her from Melbourne to New York (and everywhere in between). You can find out more about Bernadette's work on her site, The Story of Telling. 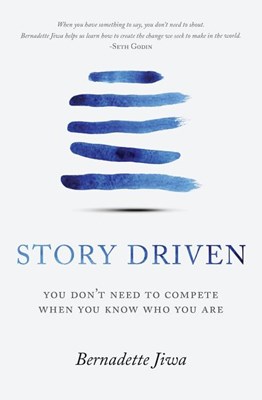 Story Driven: You Don't Need to Compete When You Know Who You Are