The Art of the Start 2.0: The Time-Tested, Battle-Hardened Guide for Anyone Starting Anything

Guy Kawasaki explains why he updated his classic book on entrepreneurship, The Art of the Start. The process of writing our "company book," The 100 Best Business Books of All Time was difficult—just ask our GM Sally Haldorson, who helped Jack Covert and Todd Sattersen, the book's official authors, through it—but the process of choosing the books was far more daunting. To winnow it down to the 100 best required reading many more than the 100, and the final cuts were painful. One book that breezed through the selection process was Guy Kawasaki's The Art of the Start. There was simply no doubt that what is perhaps the best book on starting anything was not only making it through, but that the Entrepreneurship chapter would begin with it.


But a lot has changed the world of Entrepreneurship since the book came out, prompting Guy to revisit what is already a classic, and not only revise it, but almost double it in length—which is why this new version is not The Art of the Start (revised), but The Art of the Start 2.0: The Time-Tested, Battle-Hardened Guide for Anyone Starting Anything!

Guy's introduction to the book is below...

I have never thought of writing for reputation and honor. What I have in my heart must come out; that is the reason why I compose. —Ludwig van Beethoven

"If I knew then what I know now." Most experienced entrepreneurs say this at some point. My goal is that you won't have to because you read this book.

I've started three companies, invested in ten, and advised organizations as small as two people and as large as Google. I've worked for Apple twice, and I'm the chief evangelist of a startup called Canva. Hundreds of entrepreneurs have pitched me-until my right ear won't stop ringing.

When it comes to startups, I've been there and done that several times over. Now I 'm doing what techies call a "core dump," or recording what 's in my memory. My knowledge comes from my scars-in other words, you will benefit from my hindsight.

My goal is simple and pure: I want to make entrepreneurship easier for you. When I die, I want people to say, "Guy empowered me." I want lots of people to say this, so this book is for a broad population:

I assume that your goal is to change the world—not study it. Entrepreneurship is about doing, not learning to do. If your attitude is "Cut the crap let's get going," you're reading the right book by the right author. Onward ...

Guy Kawasaki, who helped make Macintosh a household name, now runs Garage Technology Ventures, a venture-capital firm. He has held his workshop, "Boot Camp for Start-ups," around the world. Kawasaki is the author of seven previous books, including Rules for Revolutionaries. 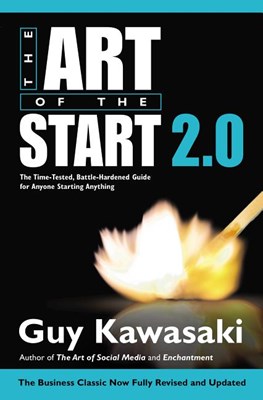 The Art of the Start 2.0: The Time-Tested, Battle-Hardened Guide for Anyone Starting Anything

Art of the Start: The Time-Tested, Battle-Hardened Guide for Anyone Starting Anything