The CEO Next Door: The 4 Behaviors That Transform Ordinary People Into World-Class Leaders

Elena Botelho and Kim Powell explain that "much of what we hear about who gets to the top, and how, is wrong," and give us a clearer picture of how to launch your career to the top. Based on an in-depth analysis of over 2,600 leaders drawn from a database of more than 17,000 CEOs and C-suite executives, as well 13,000 hours of interviews, and two decades of experience advising CEOs and executive boards, Elena L. Botelho and Kim R. Powell overturn the myths about what it takes to get to the top and succeed.

Their groundbreaking research was the featured cover story in the May-June 2017 issue of Harvard Business Review. It reveals the common attributes and counterintuitive choices that set apart successful CEOs—lessons that we can apply to our own careers.

Much of what we hear about who gets to the top, and how, is wrong. Those who become chief executives set their sights on the C-suite at an early age. In fact, over 70 percent of the CEOs didn’t have designs on the corner office until later in their careers. You must graduate from an elite college. In fact, only 7 percent of CEOs in the dataset are Ivy League graduates—and 8 percent didn't graduate from college at all. To become a CEO you need a flawless résumé. The reality: 45 percent of CEO candidates had at least one major career blowup.

What those who reach the top do share are four key behaviors that anyone can master: they are decisive; they are reliable, delivering what they promised when the promise it, without exception; they adapt boldly, and they engage with stakeholders without shying away from conflict.

Based on this breakthrough study of the most successful people in business, Botelho and Powell offer career advice for everyone who aspires to get ahead. Based on research insights illustrated by real life stories from CEOs and boardrooms, they tell us how to:

For everyone who aspires to rise up through the organization and achieve their full potential, The CEO Next Door is an essential guide.

The book is being released today by the Currency imprint, and the excerpt below, provided by the good people at Crown Publishing Group, discusses…

Launching Your Career to the Top

Most CEOs don’t start out their careers with the goal of becoming a CEO. Nevertheless, we saw patterns emerge in the routes to the top.

Take “Christine,” a first-time CEO we recommended several years ago to run a health and wellness company. She went on to move the company from a crisis to profitability in fewer than twelve months.

Christine was the daughter of horse trainers and was brought up working seven days a week next to her boss, her dad. She worked full-time while in college and lived at home. Her résumé looks nothing like the typical Fortune 500 career path, adroitly described in a Forbes magazine article: “After graduation, grab a few years of related work experience before heading back to school for an MBA at a top university, and then follow that up with a stint at Bain or McKinsey. Finally, make the jump to the company you hope to lead one day, and be sure to get some operational experience and international exposure.”

Christine never received an MBA, never joined a management consulting firm, and was an external recruit when she became CEO. Yet her career story is right in line with an experiential trajectory that we identified across almost a thousand journeys to the CEO suite. On average, CEOs we have analyzed took twenty-four years to get from day one in their first job to the CEO role. There is no one-size-fits-all prescription. Each journey is unique. However, we have uncovered several common patterns on the way to the top that can help guide your choices.

CEOs’ careers are roughly divided into three stages. Each stage has a role to play in preparing one for the top. Many of the insights below are helpful to anyone looking for professional growth at any stage in one’s career, whether or not the C-suite is the ultimate goal.

Stage 1: Go broad (years 0 to 8). The position of CEO requires one to be the ultimate generalist. We see roots of that profile early in future CEOs’ career trajectories. They build a wide breadth of skills and experiences early on by moving across functions, industries, companies, and geographies. Making unconventional moves is both easiest and least risky at this stage.

For those starting out their careers in large companies, this diversity of early experiences often comes from rotational programs that offer new recruits opportunities to try their hand at different parts of the business. In professional services companies, working on projects solving different types of problems for clients across a wide range of industries delivers similar exposure. Small or startup companies also afford an opportunity to wear multiple hats at the same time. Some future CEOs accelerate their progress at this stage with an MBA—either a full- time program or part-time around a demanding work schedule. As for Christine, she started as a horse trainer, later taught financial literacy classes, and then shifted into corporate training before opening new retail stores for a fitness company.

No matter your starting point, the key priority guiding choices in this first stage is to maximize the breadth and pace of your learning, ideally in direct contact with role models for high professional standards. Much like early life experiences, early professional experiences form a powerful imprint that influences one’s views on what is possible. This makes it even more important to learn from a broad range of people, styles, and situations. This is also a time to build valuable foundational skills that will be harder to master later, particularly problem-solving, financial analysis, and oral and written communications skills.

Stage 2: Go deep (years 9 to 16). If stage 1 is about learning above all, stage 2 is about measurable results above all. Years 9 to 16 are typically spent building leadership ability, depth of industry experience, and a track record of results. The CEOs in our sample had on average 13 to 16 years of experience in the same industry as the company they were seeking to lead. In these years, future CEOs work toward general management roles that directly drive topline and/or bottom-line revenue or profits. That might mean running a P&L, or it might mean being a functional leader in sales, marketing, or operations. Most important, future CEOs are demonstrating that they can lead others to produce outsize measurable results. Over 90 percent of our CEOs had general management experience prior to becoming CEO. On average, CEOs have 11 years of general management experience under their belt before stepping into their first CEO role.

Christine eventually held a North American general management role, responsible for a $400 million portfolio of retail stores for a company within the fitness industry. According to Kaplan and Sørensen’s research on our data, divisional P&L roles are the most common stepping stone to CEO.

In this second stage, career stories of leaders who go on to become strong CEOs are peppered with examples such as: “I took the Southwest region from the worst performing to top quartile across the company” or “I turned marketing from a dusty department producing PowerPoint charts into a generator of 90 percent of new million-dollar leads in the company” or “I built the plant in Mexico in record time and on budget—unprecedented for our company.” Stage 2 is the time to show measurable impact and value as a result of your leadership.

Stage 3: Go high (years 17 to 24). Stage 3 is where we see careers of future CEOs take a dramatically different turn. While many will remain effective functional leaders, middle managers, or even P&L operators, future CEOs differentiate themselves as enterprise leaders. As enterprise leaders, they make decisions taking into account the context and impact on the entire business rather than confining their view only to their own area, and they impact results beyond their immediate scope of authority. At this stage, future CEOs impact success of the entire company.

By the time they finish this third stage, roughly 24 years into their career, future CEOs have typically held 8 to 11 positions, which translates to between 2 to 3 years of tenure per role. They also have been exposed to between 4 and 6 companies. When appointing CEOs, boards look for them to have roughly a ten-year runway in the role. Approximately three quarters of finalist candidates for CEO positions fall between the ages of 40 and 54, and only 5 percent are over 58 years old. Many cross the finish line into the CEO role through placement by executive recruiters. In our analysis of 91 midmarket first-time CEO hirings, 30 percent were sourced through recruiters, as was Christine.

More important, leaders start to look like future CEOs in this final period when they succeed in growing influence and demonstrating initiative beyond the formal authority of any given role. For example, a vice president might lead a company-wide initiative that requires him to influence peers and other senior players who don’t report to him. Christine, for example, initiated discussion about, advocated the business case for, and ultimately led the implementation of a company-wide ERP, the company’s largest investment for that year, which impacted every function and commercial team. This is also the time in which future CEOs expand their reach beyond the walls of their company. They build a brand within their industry, taking visible, conversation-defining positions on the driving questions of the day and communicating them through speaking opportunities, the media, and by convening other CEOs and leaders.

There are no ready-made maps to the top, especially for those in the first two stages of their career. No matter where you are today, the real takeaway is this: Don’t look at your career as a succession of jobs to land; instead, look at your decisions as a portfolio of experiences to build.

Excerpted from The CEO Next Door.
Published by in the United Stated by Currency,
an imprint of the Crown Publishing Group,
a division of Penguin Random House, LLC, New York.
Copyright 2018 by G.H. Smart & Company, Inc.
All rights reserved.

ELENA L. BOTELHO grew up in Azerbaijan and Russia in a family of mathematicians and earned her MBA from Wharton. She has advised more than 200 CEOs and boards over nearly two decades, first as a strategy consultant at McKinsey and currently as a partner at ghSMART and Yoda for CEOs.

KIM R. POWELL grew up in Atlanta, Georgia, and earned a BA from the University of Notre Dame and an MBA from the Kellogg Schoool of Management . For nearly twenty years, Kim has applied her passion for helping people to her role as trusted advisor to CEOs and high-potential leaders, first at the Boston Consulting Group and now at ghSMART.

TAHL RAZ is an award-winning journalist and bestselling author. 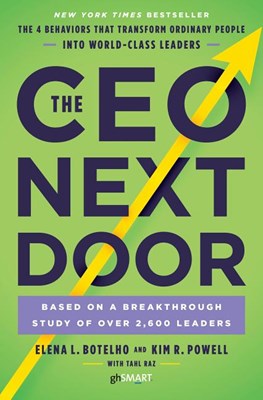 The CEO Next Door: The 4 Behaviors That Transform Ordinary People Into World-Class Leaders