The Gift of Struggle: Life-Changing Lessons About Leading

Bobby Herrera, CEO of Populus Group, shares the very real parallels he found between climbing a mountain and putting a team together in business. The publishing nerds among us will know who Ray Bard is. Bard is an industry veteran who has worked with a number of traditional publishers in almost every aspect of the publishing process—from writing, producing, and promoting books, to publishing them himself. He sold one small press to the newspaper of record, The New York Times, before founding the one he currently resides over—Bard Press—from which more than 50 percent of the books published have become national bestsellers since he founded it in 1996.

Ray was recently joined by our old friend and colleague, Todd Sattersten, as Deputy Publisher at Bard Press. It's hard to think of a better combination of talent and enthusiasm for books, unless you throw in a gifted first-time author, which is what you get when you add Bobby Herrera, CEO of Populus Group. Last week, they released a book by Herrera entitled The Gift of Struggle.

Patrick Lencioni has called it "“A powerful leadership book from the best CEO you’ve never heard of.” Alan Mulally, former CEO of Boeing and Ford, says that “Bobby’s story teaches us that who we are will have a significant influence on the leaders we become.” The jacket tells us even more:

Every leader has stories about the challenges they have faced and struggles they have overcome. In the moment, those situations require strength, patience, perseverance and courage. With time, those struggles provide us lessons for how to be better leaders. Bobby Herrera learned to see those struggles as gifts. As the co-founder and CEO of Populus Group, Bobby never imagined the challenges of building a $500 million organization that serves tens of thousands of people. Throughout his life, he experienced the divergence between the intentional leader he wanted to be, and the less engaged version of him that showed up at the office every day. One day at a company meeting, he decided to share a story about one of his first struggles as a young adult. That story, a pivotal experience that had transformed Bobby’s life, inspired his employees with its radical transparency, humility and the idealism of Bobby’s dreams for the company. In The Gift of Struggle, Bobby shares twelve of those stories from his leadership journey. Each chapter shares the details of the story, the broader lesson any leader can apply, a set of questions to reflect on, and an afterword for how the story later unfolded in Bobby’s life. Building on Bobby’s efforts, this book inspires readers to find their own stories, share their gifts of struggle with others, and become the leader they imagine they can be.

We were able to get the following excerpt, from "Chapter 12: Rainier," to get you started.

When we moved to Seattle in 2008, I enjoyed amazing views of Mount Rainier on my daily commute as I crossed Lake Washington. I’ve been captivated by mountains since I was sixteen, finding them to be beautiful and therapeutic. The challenge of summiting a peak intrigued me. Not long after our move to the Pacific Northwest, I signed up to climb Mount Rainier the following summer, much to my pregnant wife’s chagrin. Given what little free time I had away from the business, she had other ideas about what I could be doing.

I started training the following April in the pre-dawn hours. Santino was an infant. I followed my training regimen as closely as I could, given the circumstances at home, and worked to prepare for the August climb. Four months later, I was tired but in the best shape I’d been in since I was in the Army.

As the date approached, my buddy Britt flew in. I’d convinced him to train and come with me. On the day of the climb, we headed to the mountain and met the guides and the other ten climbers in our group. Every group starts from Camp Muir at an elevation of 10,000 feet and makes the 4,400-foot climb to the summit. You make your summit bid by starting late at night, reaching the summit by morning, and returning back to Camp Muir the same day.

That evening we covered the details of the route while the guides inspected our equipment. We departed at 1:00 a.m. without having slept a wink. Adrenaline and nerves made us all jittery. We just wanted to get going and get it over with.

A couple hours in, halfway up Disappointment Cleaver, four climbers quit; two guides escorted them back to Camp Muir. A guide informed us that this was the point at which 90% of climbers fail or give up. It’s not only steep, sandy, and rocky, but oxygen is scarce. It tests your endurance and your will when you realize it’s only halfway to the summit.

Ascending the Cleaver, we had two more segments to reach the summit by sunrise. We lost another climber to altitude sickness. The guide told us if one more climber dropped out, we’d all have to return to Camp Muir. Those of us who remained stiffened our resolve. None of us wanted to be the one that turned the whole party around.

The storm hit on the final run to the top. We had been warned it was coming. The orange sun and black clouds were stunning and troublesome. Blistering wind and cold grew fiercer with every step. It felt as though someone was pulling us backwards with a rope. The air was so thin, I felt like I was breathing through a straw.

As we reached the summit just before 7:00 a.m., icicles formed on our gear. We celebrated and hurriedly snapped photos. I posed with the Populus Group (PG) flag I’d made and got the picture I wanted to share. The storm worsened, so given the conditions, we skipped the hour of rest usually allowed before descending.

Only seven of twelve climbers made it that day. Two quit, two got altitude sickness, and one injured her knee. I asked the guide how many times he’d had everyone in their group reach the summit. He told me, “I can’t recall a climb when everyone made it to the top. It’s possible, I guess, but it seems like something always happens.”

Not Everyone Will Summit

I used to invest a great deal of time and effort in building my teams and consequently put extreme pressure on myself to keep them together. When someone left the company, I beat myself up for days. It’s hard when you put time and energy into someone who then decides to leave. This feeling of loss is shared by most leaders who care deeply about their people.

When I pause now and think about my perspective in earlier years, I shake my head at how ridiculous it was to think I could retain my entire team as I built the company. We know most things work out differently than we plan. Why shouldn’t that apply to our employees? It’s universal for everyone.

The Mount Rainier climb provided a new way to metaphorically illustrate how I understood the company. In my view, the climb is continuous and never ending. There is always another summit. It’s how I remain aware of the fact that PG has to continually improve to remain a competitive business. Everyone at PG is a climber on the ascent toward personal and professional growth. As teams we are stronger, go further, and accomplish more than we ever could alone. There is no actual summit in business. There are peaks and valleys—the business cycles we endure, the victories and pain points within an organization—that we experience as highs and lows. And yet as long as our doors remain open, there is no final endpoint, only new challenges, problems, innovations, and solutions.

After I shifted my perspective, I could worry less—but not care less—about losing someone on my team. Like the guide on the mountain had told me, something always happens. When someone on the team leaves the company, I look for the gift by understanding the reason behind the departure. If I can fix anything internal to PG and help everyone that remains on the team, I make the change. If I can’t, we press ahead, knowing a new team member will join us and bring their own unique gifts to contribute. I feel liberated by a mindset that keeps me focused and present with the team I have with me on the mountain, rather than being disheartened by those who have left to scale peaks of their own.

It’s helpful to think of people who move on to follow other pursuits as the alumni of your company. Don’t write them off. Maintain the connection and keep them in your network. Former team members may still make surprising contributions to your business in the future. Though I haven’t been perfect in applying this more generous perspective, my appreciation and respect for all the great people that have climbed with me continues to grow. Their successes deserve to be acknowledged just as much as those who are still part of the PG climb.

Bobby Herrera is the founder and president of Populus Group. With a passion for building strong culture and communities through trust and storytelling, his leadership style is about empowerment, connections, and ensuring everyone has the opportunity to succeed. Bobby is a proud Army veteran and currently lives in Portland, Oregon with his wife and three children. 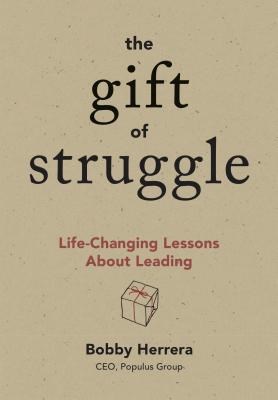 The Gift of Struggle: Life-Changing Lessons about Leading