An Introduction to The Innovator’s Spirit

Innovation isn't optional—it's imperative. Innovation is personal. It’s about people. It’s not about a process or a system. 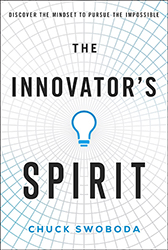 Chuck Swoboda is the Innovator-in-Residence at Marquette University here in Milwaukee, Wisconsin. He hosts a podcast called Innovators on Tap, with which he spreads his belief that "innovation is about people, not process." As they put it: "The show is not about recipes but about ingredients and the people who put them together in new and different ways. It's focused on understanding how and why these people were able to overcome the challenges that stop so many others."

Swobodaada has a new book out this week called The Innovator's Spirit: Discover the Mindset to Pursue the Impossible, and we were able to get the following excerpt from his publisher, Fast Company Press. Enjoy!

Everyone wants innovative thinking these days. To create new products and services. To find new customers and markets. To work smarter, not harder. To stay ahead of the competition. Innovation isn’t optional; it’s an imperative. If you don’t innovate, you’re dead in the water.

This book tackles an aspect about innovation that often gets overlooked: Innovation is personal. It’s about people. It’s not about a process or a system. It’s a mindset, a belief that anything is possible—and you’ll stop at nothing to make it happen. Innovation requires leadership and a burning desire to find a way to solve the problem or get to the goal, even if you seem to be the only one who recognizes it. You know there must be a better way and you’re willing to do what it takes. It’s about someone’s emotions, character, and willingness to get their hands dirty—their spirit.

Discovering your innovator’s spirit is a journey. And it never ends. The innovator’s spirit is built on a foundation of core beliefs that drive the behaviors of people like you and me to innovate by overcoming the obstacles that conventional thinking puts in our way. It’s a passion rooted in wanting to do something that has never been done before, to solve problems that have never been solved, and to run through walls and leap over tall buildings to get there.

I believe an innate innovator’s spirit resides in all of us. It has been my experience, however, that not only can a person lose this spirit, but there are also those who can’t tap into it. They either don’t encounter a need for it, or they simply can’t uncover it because it is buried under years of teaching and training that create beliefs and behaviors that don’t lead to innovation. They’ve become conditioned to accept predictable results. Most people want order, they prefer the predictable and the routine, and there’s absolutely nothing wrong with this. It should even be celebrated. It just won’t result in innovation.

People who love to innovate, on the other hand, believe predictability is boring. True innovation is about leading—it’s about embracing the beliefs and behaviors that inspire you and others to do something you didn’t think was possible. What I have learned through the help of my executive coach, Dr. Gerald Bell, is that behaviors are tied to a set of core beliefs, and people fundamentally act based on those beliefs. What they really believe—not what they say they believe—is what drives their behavior, especially when under pressure or in a stressful situation. Sure, when someone is focused and thinking about a specific approach, you might be able to get some short-term behavior change. But when the pressure is on, people react, and their actions are driven by their beliefs. It’s unconscious, like an autopilot. Until you change your beliefs, you can never adopt the behaviors that are core to the innovator’s spirit. That’s why innovation can’t be a process. If you try to just copy the behaviors, you’ll run into what a friend of mine calls “logical fallacies.” Which is why just dressing and talking like Steve Jobs doesn’t equate to leading innovation. You have to start with your beliefs.

Chuck Swoboda is the Innovator-in-Residence at Marquette University, President of Cape Point Advisors, and the retired Chairman and CEO of Cree, Inc. During his time with Cree, the company led the LED Lighting Revolution that drove the obsolescence of the Edison light bulb. He is an author, speaker, and host of the Innovators on Tap podcast and has over thirty years of experience in the technology business.

In 2010, Chuck was named Ernst & Young’s Entrepreneur of the Year for the Carolinas. During his time as CEO, Cree was recognized as MIT Technology Review’s 50 Smartest Companies for 2014 and as one of Fast Companies World’s 50 Most Innovative Companies in 2015.

Chuck holds an electrical engineering degree from Marquette University (1989), where he served on the Board of Trustees for 12 years. He and his wife live in Cary, North Carolina. When he’s not writing or working, you will likely find him fishing on Bald Head Island. 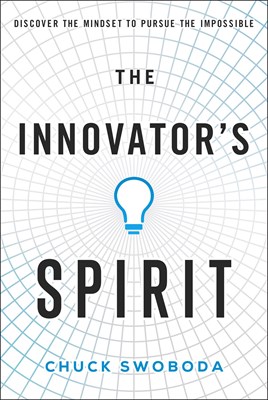 The Innovator's Spirit: Discover the Mindset to Pursue the Impossible