The Power of a Positive Team: Proven Principles and Practices That Make Great Teams Great

Jon Gordon knows that positive teams don’t happen by accident, so he put his prolific pen to work to help with some practical, everyday ways to get there. Jon Gordon opens Chapter One of his new book, The Power of a Positive Team, with a simple statement: "Positivity is more than a state of mind. It’s a power that gives teams a competitive advantage in business, sports, creativity, and life." It sounds a bit mundane, but it is an important message at a time when positivity feels hard to muster, when so much of our discourse is focused on what divides us rather than the power that exists when we come together. So, perhaps the mundane approach, one that focuses on the practical and ordinary aspects of that power, one that recognizes that the terrestrial world is what gives us the horizon, is the best place to begin.

With that in mind, we'd like to offer the following excerpt from Gordon's new book, courtesy of our friends at his publisher, Wiley.

I don’t encourage teams to be positive just because it’s more fun, enjoyable, and rewarding to be part of a positive team. I am passionate about creating positive teams because I know that positive teams are also more engaged and more likely to overcome all the forces against them and make a greater impact.

It’s challenging to work toward a vision and create a positive future. It’s difficult to launch new ideas, products, movies, missions, and organizations. It’s not easy to pursue greatness and do what has never been done before. As a team you will face all kinds of adversity, negativity, and tests. There will be times when it seems as if everything in the world is conspiring against you and your team. There will be moments you want to give up. There will be days when your vision seems more like fantasy than reality. That’s why becoming a positive team is so important. When I talk about positive teams, I am not talking about Pollyanna positivity, where you wear rosecolored glasses and ignore the reality of the situation. Positive teams are not about fake positivity. They are about real optimism, vision, purpose, and unity that make great teams great. Positive teams confront the reality of challenging situations and work together to overcome them.

Pessimistic teams don’t become legendary. Negative teams talk about and create problems but they don’t solve them. Throughout history we see that it’s the positive teams that create the future and change the world. The future belongs to those who believe in it and work together with other positive people in order to create it.

I have witnessed the power of a positive team, and the research supports that positivity is a difference maker. Research by Manju Puri and David Robinson at Duke University found that optimistic people were more likely to succeed in business, sports, and politics. Relationship expert John Gottman’s pioneering research found that marriages are much more likely to succeed when the couple experiences a five-to-one ratio of positive to negative interactions; when the ratio approaches a one-to-one ratio, marriages are more likely to end in divorce.

The positive energy you share with your team is significant. According to organizational expert Wayne Baker, who works with fellow researcher Robert Cross, “the more you energize people in your workplace, the higher your work performance.” Baker says that this occurs because people want to be around you. You attract talent and people are more likely to devote discretionary time to your projects. They’ll offer new ideas, information, and opportunities to you before others.”

When you have a group of people doing this on a team, you create a positive feedback loop that makes your team operate at a higher level. Many think that you have to choose between positivity and winning, but you don’t. Positivity leads to winning. The research is clear. Positivity is more than a state of mind. It’s a power that gives teams a competitive advantage in business, sports, creativity, and life.

Since there are many different types of teams, I made it a point [inThe Power of a Positive Team] to include various examples from business, education, sports, music, technology, and more. Please know that even though I share a number of examples of sports teams, I’m aware that not everyone is a sports fan. However, I want to make it clear that the reason why I share these examples is to demonstrate how these principles work in real life.

The great thing about sports teams is that you can observe the effectiveness of these principles over the course of a season. You can tell who has become a positive team and who hasn’t. You can see it in person and on television. I’ve been fortunate to work with many sports teams, and they are great case studies. And since I’ve also worked with countless businesses and schools, I can assure you the same principles apply to every team and organization. If you are not a fan of sports, simply take the sports example and think about how it applies to your team. You will discover a number of great ideas to make your team better.

Positive teams don’t happen by accident. They happen when team members invest their time and energy to create a positive culture; work toward a shared vision with a greater purpose; work together with optimism and belief and overcome the negativity that too often sabotages teams and organizations. Positive teams take on the battle, overcome the negativity, face the adversity, and keep moving forward. They communicate, connect, commit, and encourage each other. They build relationships and trust that makes them stronger.

Positive teams commit to the mission and to each other. Instead of serving themselves, they serve one another. They care more about their effort, work, and teammates than they do about all the distractions vying for their attention. People on positive teams have a lot of belief in each other, a lot of love for each other, and a lot of desire to accomplish something great together. They pursue excellence and always strive to get better and make their team better. They lose their ego in the service of their team and find an uncommon collective greatness in the process. Because they care more, they do more, invest more, commit more, and accomplish more.

Jon Gordon'S bestselling books and talks have inspired readers and audiences around the world. His principles have been put to the test by numerous Fortune 500 companies, professional and college sports teams, school districts, hospitals, and non-profits. He is the author of 15 books including 5 bestsellers: The Energy Bus, The Carpenter, Training Camp, You Win in the Locker Room First, and The Power of Positive Leadership. All published by Wiley. 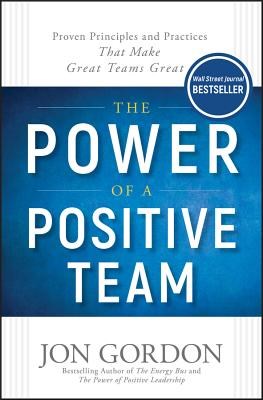 The Power of a Positive Team: Proven Principles and Practices That Make Great Teams Great