The Storyteller's Secret: From TED Speakers to Business Legends, Why Some Ideas Catch On and Others Don't “The people who are crazy enough to think they can change the world,
are the ones who do.” —Steve Jobs

Story played an important role in Elon’s childhood in South Africa. “He seemed to have a book in his hands at all times,” wrote his biographer. When school let out at 2:00 p.m., he would go to the bookstore and stay until 6:00 p.m. The Lord of the Rings and The Hitchhiker’s Guide to the Galaxy were among his favorites.

Young Elon loved reading stories and hearing them. He remembers listening, transfixed, to the stories of his grandfather, Joshua Haldeman, who had “a lust for adventure.” Haldeman would pack his family into a single-engine airplane and travel from their home in Pretoria, South Africa, on trips that would traverse 22,000 miles across Europe. “My grandmother told these tales of how they almost died several times along their journeys,” Elon recalls.

Today Tesla and SpaceX CEO, Elon Musk, believes those stories of his grandfather’s exploits help to explain his insatiable desire for excitement, adventure, and his “unusual tolerance for risk.” Musk is one the most influential innovators of our time, pioneering advances in electric cars, space travel, and sustainable energy.

On April 30, 2015, Musk introduced the Tesla Powerwall, a home battery that captures and stores sunlight from solar panels and converts it to energy. Although it’s designed for the average consumer, the technology that makes it work is highly complex. According to the Web site, “The Tesla Powerwall is a wall mounted, rechargeable lithium ion battery with liquid thermal control. It delivers a 5.8 amp nominal current and 8.6 amps at peak output. Powerwall is available in 10kWh, optimized for backup applications or 7kWh optimized for daily use applications.” And that’s the easy material. The technical specs are understandable only to the most advanced scientists and physicists.

Elon Musk is one of the smartest inventors on the planet, but when he explains technology to consumers he uses language even a sixth-grader can read.

Peter Kincaid co-developed the Flesch-Kincaid readability test in 1975 for the U.S. Navy. The U.S. Defense Department began using it to assess the reading difficulty of training manuals. Today educators rely on the score to gauge the appropriate reading level for books used in the classroom. The Flesch-Kincaid grade level test measures word length, sentence length, and other factors to assign a grade level—the number of years of education generally required for a person to understand a specific text. For example, articles in the Harvard Business Review return a grade level of 17 or higher. Articles in The New York Times are written for ninth grade or higher, while, according to the tool, “Text to be read by the general public should aid for a grade level of around 8.”

Let’s take a closer look at the key phrases in Elon Musk’s Powerwall presentation. Musk understands story and he knows that all great stories, as we’ve discussed, have a hero and a villain. Musk introduces the villain and the hero is the problem and a solution. And he uses simple words and sentence structure to do it. Musk’s first slide shows a picture of smokestacks spewing emissions into the air. Musk says:

Welcome everyone to the announcement of Tesla Energy. What I’m going to talk about tonight is a fundamental transformation of how the world works, about how energy is delivered across Earth. This is how it is today. It’s pretty bad. It sucks. I just want to be clear because sometimes people are confused about it. This is real. This is actually how most power is generated, with fossil fuels.

The previous paragraph returns a Flesch-Kincaid grade level of 6.3, meaning that the average sixth-grader should be able to read it and generally understand it. Surely the solution must be more complicated, right? Well, let’s see. According to Musk the solution starts by looking up:

The solution is in two parts. Part one, the sun. We have this handy fusion reactor in the sky called the sun. You don’t have to do anything. It just works. It shows up everyday and produces ridiculous amounts of power.

The previous paragraph returns a Flesch-Kincade readability score of just 2.9. While the average third-grader doesn’t understand a “fusion reactor,” they should be able to read it. The sentences are short and most of the words are made up of just one syllable. I was skeptical when I first saw a grade level of 2.9, but I had access to my own personal experiment. My youngest daughter had just completed second grade. I recorded her reading the paragraph on her first try. She read it almost perfectly, stumbling on just two words: reactor and ridiculous. My eldest daughter read it perfectly and understood all of it, including the word “fusion.” Once Musk introduces the sun as the hero of his narrative, he introduces another challenge—existing batteries. Once again he uses simple language to describe the problem:

The issue with existing batteries is that they suck. They’re really horrible. They’re expensive. They’re unreliable. They’re sort of stinky, ugly, bad in every way, and very expensive.

And once again, the Flexch-Kincaid tool returns a grade level of 6.1 for the preceding paragraph, meaning that a person doesn’t even need a high school education to understand it. A blogger for The Verge covering the Elon Musk presentation wrote an article titled, “Watch Elon Musk Announce Tesla Energy in the Best Tech Keynote I’ve Ever Seen.” In the article T.C. Sottek wrote, “Dude’s selling a battery and he still managed to be inspiring.” Yes, the “dude” is selling a battery, but batteries don’t inspire. Stories do.

Musk’s keynotes are being compared to another technology innovator and storyteller, Steve Jobs. Jobs, too, understood the need to introduce villains and heroes (problem/solution) in product narratives and he did so in words so simple a grade-school student could understand it.

In a 10-minute presentation on April 28, 2003, Steve Jobs reinvented the music industry and persuaded millions of music lovers to pay 99 cents for a song. The iTunes music store completely changed how people acquire and enjoy music. For 99 cents per song users could choose from 200,000 tracks. More than 1 million songs were sold in the first week. Today, the Apple iTunes music store is the largest music retailer on the planet.

Steve Jobs revolutionized the music industry by doing something quite extraordinary: He persuaded millions of music lovers that it was a good idea to pay for something many of them were getting for free on peer-to-peer file sharing programs, and he did so using the classic narrative technique of introducing a villain and a hero. The villain appeared first—a problem in need of a solution. The hero followed—an Apple product. Jobs began with a brief discussion of Napster and Kazaa, sites that offered “near instant gratification” and, from the user’s perspective, free downloads. On the next slide he listed the “dark side.” They were:

Jobs continued to paint a picture of the villains, using Kazaa as the antagonist in the narrative. He demonstrated how a typical user might have to guess at among the 50 or 60 files of the same song and choose which one to download. He said, “The download is slow as molasses and craps out half way through.” Finally, he said, you’ve downloaded the song only to discover it was encoded poorly and the last few seconds had been cut off. After 15 minutes, the user gets a clean version of the song. Jobs brilliantly put his time into perspective:

“What that means is you’ll spend an hour at that rate and you’ll get four songs; four songs that cost under four bucks from Apple and you calculate that you are working for under minimum wage.”

Jobs challenged the notion that consumers would balk at paying 99 cents a song:

“How much is 99 cents? How many of you had a Starbucks latte this morning? Three bucks. That’s three songs. How many lattes got sold across the U.S. this morning? A lot. Ninety-nine cents is pretty affordable.”

Finally, Jobs listed the benefits (the hero) of downloading songs on the new iTunes music store. His slide revealed the following text:

In 10 minutes Jobs had completely transformed the mind-set of those who didn’t believe in paying 99 cents, let alone any price, for the songs they were already downloading. He also convinced skeptical analysts that the service would provide a strong enough benefit to encourage music lovers to spend 99 cents a song and make money for Apple. Remarkably, the text from Steve Jobs’s introduction of iTunes—when run through the Flesch-Kincaid grade level tool—returns a grade of 4, meaning a fourth-grader could follow along and understand the problems and solution Steve Jobs had explained.

The next time you face a skeptical audience, paint a picture of the villain before you introduce your product or service—the conquering hero. The villain/hero narrative simplifies the problem your idea solves and, if you use simple words, you might be surprised at just how quickly your idea catches on. “Simple can be harder than complex,” Steve Jobs once said. “You have to work hard to get your thinking clean to make it simple. But it’s worth it in the end because once you get there, you can move mountains.” Steve Jobs, Elon Musk, and other inventors of our time do move mountains and they often carry their message with simple stories, simply told.

You may have the greatest product in the world, the greatest ideas, but if people can’t understand the problems they solve, they’ll never buy into it. Storytellers introduce heroes and villains to simplify the story, and they craft the message in words that are so simple an elementary school student can understand it.

Excerpted from The Storyteller's Secret: From TED Speakers to Business Legends, Why Some Ideas Catch On and Others Don't by Carmine Gallo.
Published by St. Martin's Press.
Copyright © 2016 by Carmine Gallo.
All rights reserved.

Carmine Gallo is the two-time Wall Street Journal bestselling author of Talk Like TED. He is a communications coach for widely admired brands such as Pfizer, LinkedIn, Intel, and Coca Cola, and a keynote speaker known for teaching the world's most respected business leaders how to deliver dynamic presentations and share inspiring stories. He is a columnist for Forbes.com and Entrepreneur.com. He is the head of GALLO Communications in California, where he resides with his wife. 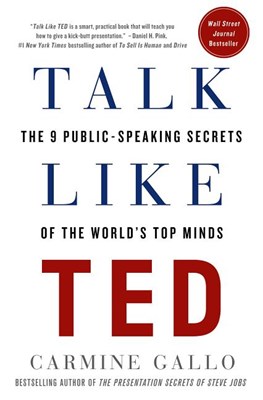 Talk Like Ted: The 9 Public-Speaking Secrets of the World's Top Minds