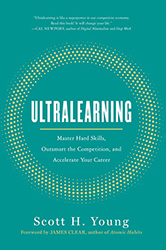 Faced with tumultuous economic times and rapid technological change, staying ahead in your career depends on continual learning—a lifelong mastery of new ideas, subjects, and skills. If you want to accomplish more and stand apart from everyone else, you need to become an ultraleaner.

In this essential book, Scott Young incorporates the latest research about the most effective learning methods and the stories of other ultralearners like himself—among them Ben Franklin and Richard Feynman, as well as a host of others, such as little-known modern polymaths like Alexander Arguelles, who speaks more than forty languages.

Young documents the methods he and others have used and shows that, far from being an obscure skill limited to aggressive autodidacts, ultralearning is a powerful tool anyone can use to improve their career, studies, and life. Ultralearning explores this fascinating subculture, shares the seven principles behind every successful ultralearning project, and offers insights into how you can organize and execute a plan to learn anything deeply and quickly, without teachers or budget-busting tuition costs.

Whether the goal is to be fluent in a language (or ten languages), earn the equivalent of a college degree in a fraction of the time, or master multiple skills to build a product or business from the ground up, the principles in Ultralearning will guide you to success.

The excerpt below comes from the book's introduction.

I have never attended MIT. Instead, my college days were spent studying business at the University of Manitoba, a middle-ranked Canadian school I could actually afford. After graduating with a bachelor of commerce, I felt as though I had picked the wrong major. I wanted to be an entrepreneur and so had studied business, thinking that would be the best route to becoming my own boss. Four years later, I discovered that a business major was largely a finishing school for entrants into the world of big corporations, gray suits, and standard operating procedures. Computer science, in contrast, was a major where you actually learned to make things. Programs, websites, algorithms, and artificial intelligence were what had interested me in entrepreneurship in the first place, and I was struggling to decide what to do about it.

I could go back to school, I thought. Enroll again. Spend another four years working toward a second degree. But taking out student loans and giving up a half decade of my life to repeat the bureaucracy and rules of college didn’t seem very appealing. There had to be a better way to learn what I wanted.

Around that time, I stumbled across a class taught at MIT and posted online. It had fully recorded lectures, assignments, and quizzes; even the actual exams used in the real class with the solution keys were provided. I decided to try taking the class. To my surprise, I found that the class was much better than most of the classes I had paid thousands of dollars to attend in university. The lectures were polished, the professor was engaging, and the material was fascinating. Digging further, I could see that this wasn’t the only class MIT offered for free. MIT had uploaded the materials from hundreds of different classes. I wondered if this could be the solution to my problem. If anyone could learn the content of an MIT class for free, would it be possible to learn the content of an entire degree?

Thus began almost six months of intense research into a project I named the MIT Challenge. I looked up the actual MIT curriculum for computer science undergrads. I matched and compared the list with the resources MIT offered online. Unfortunately, that was a lot easier said than done. MIT’s OpenCourseWare, the platform used for uploading class material, had never been intended as a substitute for attending the school. Some classes simply weren’t offered and needed to be swapped out. Others had such scant material that I wondered if they would even be possible to complete. Computation Structures, one of the required courses, which taught how to build a computer from scratch using circuits and transistors, had no recorded lectures or assigned textbook. To learn the class content, I would have to decipher abstract symbols written on a slideshow meant to accompany the lecture. Missing materials and ambiguous evaluation criteria meant that doing every class exactly as an MIT student would was out of the question. However, a simpler approach might work: just try to pass the final exams.

This focus on final exams later expanded to include programming projects for the classes that had them. These two criteria formed the skeleton of an MIT degree, covering most of the knowledge and skills I wanted to learn, with none of the frills. No mandatory attendance policy. No due dates on assignments. The final exams could be taken whenever I was ready and retaken with an alternate exam if I happened to fail one. Suddenly what had initially seemed like a disadvantage—not having physical access to MIT—became an advantage. I could approximate the education of an MIT student for a fraction of the cost, time, and constraints.

Exploring this possibility further, I even did a test class using the new approach. Instead of showing up to prescheduled lectures, I watched downloaded videos for the class at twice the normal speed. Instead of meticulously doing each assignment and waiting weeks to learn my results, I could test myself on the material one question at a time, quickly learning from my mistakes. Using these and other methods, I found I could scrape through a class in as little as a week’s time. Doing some quick calculations and adding some room for error, I decided it might be possible to tackle the remaining thirty-two classes in under a year.

Although it began as a personal quest, I started to see that there were bigger implications beyond my little project. Technology has made learning easier than ever, yet tuition costs are exploding. A four-year degree used to be an assurance of a decent job. Now it is barely a foot in the door. The best careers demand sophisticated skills that you’re unlikely to stumble upon by chance. Not just programmers but managers, entrepreneurs, designers, doctors, and nearly every other profession is rapidly accelerating the knowledge and skills required, and many are struggling to keep up. In the back of my mind, I was interested not only in computer science but in seeing if there might be a new way to master the skills needed in work and life.

Scott Young is a writer who undertakes interesting self-education projects, such as attempting to learn MIT’s four-year computer science curriculum in twelve months and learning four languages in one year. He lives in Vancouver Canada.