Dr. Shanklove: Or, How I Learned to Stop Worrying and Love Zombies with Peter Shankman Service is a topic close to our heart here at 800-CEO-READ, and Peter Shankman gets why it's important, so we are big fans. Truth be told, we've been fans of his since his last book, Nice Companies Finish First, which was on our shortlist of best leadership books in 2013. I wasn't sure at first that I could follow him into his new territory, what with its zombies and possible rabies-infested fans and whatnot. I mean, why is the guy who told us about the power of kindness in companies now promoting the power of the undead and diseases that cause foaming at the mouth in its customers? (Also, was he aware that rabies causes acute inflammation of the brain, while zombies are known primarily for eating brains? Is the rabies a kind of zombie rBGH for brains?) But, after putting aside my nerdier concerns, the metaphors prove to be apt. You'll begin to find out why in the excerpt below.

Right now, there are two reasons you've picked up this book (or are currently reading the first five pages on Amazon).

If your reason is 1, then I'm sorry, you've been misled. I do recommend David Wellington, however, as his book Monster Island is spectacular.

But... if your choice is 2, well then, my friend, welcome to the fray. My name is Peter Shankman, and I'm going to help you build your army. You're going to learn how to build an army of customers so strong, so stuck on you, so in love with your business, so downright loyal, they're going to take over your advertising, marketing, and PR, and they're going to do it better than you ever could yourself. You're going to build an army for your business the likes of which you've never seen—the likes of which you can't even begin to imagine. Remember the guys from 300? The really muscular ones with the painted-on abs? They wouldn't last five seconds against the Zombie Loyalists you're going to create.

You're going to learn how to take care of your army. How to train it. How to feed and water it. How to make it happy. How to nurture it. You'll learn how to command its attention at any moment. You'll learn how the loyalty of your zombies is directly proportional to your loyalty to them. You're going to be amazed, astounded, left wondering, "Can it really be that simple?" but once you get started, you'll realize, "Holy crap, it really is."

We're going to build you an army of Zombie Loyalists, and it's going to take over the world for you. Well, maybe not the world. But it'll at least bring you some great new customers and a bunch of new revenue. (But hey, maybe the world. You never know.)

But I'm getting ahead of myself. Let's talk a little background first.

When I told my best friend that my next book was going to be about customer service and zombies, his reaction was what you'd expect from any normal person.

"Zombies. Seriously? You're writing a business book about game-changing customer service, and the theme is zombies? And your publisher agreed to this?"

My friend had known me for eight years; you'd think he'd have been a bit more prepared for the way my brain functions.

Anyhow, who am I, and why are you listening to me?

Well, as I said, my name is Peter Shankman. I'm many things. I'm an entrepreneur who has successfully sold three companies. I'm an investor or advisor to at least a dozen companies, including pure tech start-ups, clothing companies, a company that makes lip balm for the teen and tween markets, and even NASA. (Yes, NASA has a civilian advisory council, and I'm honored to serve on it.) My last book, Nice Companies Finish First, explains why companies that put "nice" over "cutthroat" tend to make a lot more money.

I keep a blog at www.shankman.com; run mastermind conferences all over the world at www.shankminds.com; and cohost The Mistake Podcast, a podcast on making mistakes, at www.themistakepodcast.com. Those three things keep me traveling about 300,000 miles per year, and that traveling gives me tons of time to observe and write about what I observe. In fact, the ideas for all three of my previous books came to me on flights, and this one is no exception. Here's what happened.

I was flying home from a business meeting in Los Angeles and had just boarded my United flight. As I was getting settled, I removed my MacBook air, iPad, power cord, and headphones from my jacket. Yes, you read that right, from my jacket. I'm on the advisory board of a company called SCOTTeVEST—a clothing company that makes travel clothing, including jackets with tons of pockets, like the one I wear whenever I fly.

The person next to me couldn't take her eyes off my jacket as I removed more and more things, like 26 clowns getting out of a Volkswagen. When I sat down, she immediately asked me about the jacket, and I gushed over how many pockets it had, how I was able to do four days in Tokyo with nothing but the jacket, and so on. For the sake of full disclosure, I mentioned to her I was on the company's board as well.

"I would hope so" was her reply. "You've completely sold me on it. between watching you pull all your stuff out and how you talked to me about it, I'm going online right now and ordering one!"

"Oh, well, here—please use this code," I said, and gave her a code for 20 percent off the cost of anything on the site. Floored, she proceeded to order one for herself, one for her husband, one for each of her three kids, and one for her assistant.

She probably spent $650 to $750 dollars in under five minutes. Now here's where it gets really interesting. About halfway through the flight, she leaned over and showed me a page in the SkyMall catalog. you know, the catalog in the seat-back pocket of every single airplane that sells things like automatic cat groomers and tequila holders that will get your drink down to a temperature of absolute zero.

"This is the jacket I just bought, right?" she said, pointing to the SeV ad in SkyMall.

"Gotta tell you," she said, "you make a much more convincing advertisement than the one in this magazine."

That's when it hit me. This woman just bought five jackets not because she saw an ad and not because I was "selling" her on it. She bought the jackets based on my enthusiasm for them. She bought the jackets because I couldn't stop explaining how amazing they are. I was the best advertisement she'd ever seen, and the excitement in my eyes over being able to keep my 15-inch laptop in my jacket was enough to send her over the edge. When I showed her the two secret money compartments built into the inside of the coat as well as the space for my toothbrush(!), she was sold.

At that moment, on that airplane, I was a Zombie Loyalist for SCOTTeVEST, and I still am to this day. I'd done what all zombies are trained to do—I converted a regular person into one of the flock. How many jackets do you think her recommendations to her network are going to sell?

I created a Zombie Loyalist in seat 2-b. And it was good.

Peter Shankman is the founder of Help a Reporter Out (HARO), the largest free source repository for journalists in the world, as well as the founder and CEO of The Geek Factory, Inc., a 15-year-old marketing, branding, and PR company based in New York City with clients worldwide. His PR and social media clients have included AmEx, Sprint, the US Department of Defense, Royal Bank of Canada, Snapple, Saudi Aramco, Walt Disney World, Discovery Networks, Harrah's Hotels, and many others. In addition to Zombie Loyalists and Nice Companies Finish First, he is the author of Can We Do That?!, which has been named one of the six "must read" PR books by PR Channel, and Customer Service: New Rules for a Social-Enabled World. He is a frequent speaker and has presented at such venues as South by Southwest, BlogWorld, The Public Relations Society of America, and many other trade shows. Shankman sits on the advisory boards of several companies, as well as on the NASA Civilian Advisory Council. 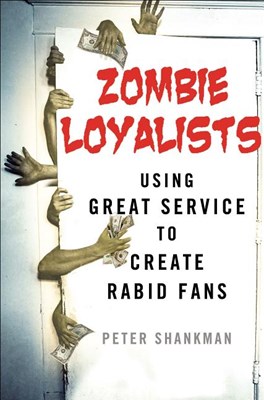 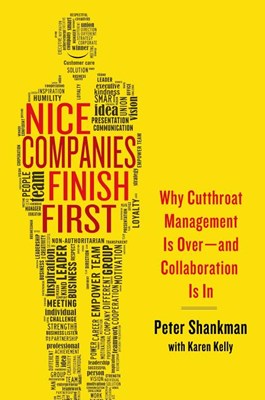 Nice Companies Finish First: Why Cutthroat Management Is Over--And Collaboration Is in

Nice Companies Finish First: Why Cutthroat Management Is Over--And Collaboration Is in