Future-proof your career and maximize your competitive advantage by learning the skills necessary to stay relevant, reinvent yourself, and adapt to whatever the workplace throws your way. 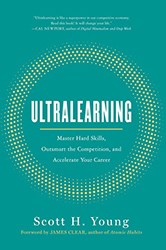 Scott H. Young rose to autodidact stardom when he learned MIT's 4-year computer science program in less than twelve months. Next he taught himself four new languages in a year. Such extreme self-improvement projects may seem outside the realm of most of our capabilities, but Young believes that the principles and methods that he and other ultralearners employ are essential tools for anyone who wants a competitive edge in the workplace. In Ultralearning: Master Hard Skills, Outsmart the Competition, and Accelerate Your Career (being released this week by Harper Business), Young reveals how basic strategies that he and other ultralearners embrace can give anyone the edge in organizing and executing a plan to learn something new deeply and quickly—and without teachers or tuition.

"Although the ultralearners are an extreme group of people, this approach to things holds potential for normal professionals and students," Young writes. "What if you could create a project to quickly learn the skills to transition to a new role, project, or even profession? … What if you could learn a new language, simulate a university degree program, or become good at something that seems impossible to you right now? Ultralearning isn't easy. It's hard and frustrating and requires stretching outside the limits of where you feel comfortable. However, the things you can accomplish make it worth the effort.

Sharing stories from his own experience and those of other ultralearners he has encountered—as well as autodidacts Ben Franklin and Richard Feynman—Young extracts his curriculum for mastery from the ground up. Beginning with a metalearning map that breaks down how a subject works and what kinds of information and skills you need to conquer it, her shows how and where one needs to focus one's attentions. A firm believer in directness—hands-on practice doing rather than mere theory—Young explains the need to identify and drill your weaknesses to bolster retrieval and retention. Applying ultralearning ideals also requires the vulnerability to admit those weaknesses, to seek advice and criticism, and to experiment outside your comfort zone. The more one learns, the greater the craving to learn more, Young says. And the better you get the more you recognize how much better you could become.

"Ultralearning is a fascinating and inspiring read," James Clear writes in his foreword. "Scott has compiled a gold mine of actionable strategies for learning anything faster. His effort is now your gain."

"Ultralearning is like a superpower in our competitive economy," adds Cal Newport, author of Digital Minimalism and Deep Work. "Read this book! It will change your life."

Scott Young is a writer who undertakes interesting self-education projects, such as attempting to learn MIT’s four-year computer science curriculum in twelve months and learning four languages in one year. He lives in Vancouver Canada.

This giveaway is brought to you by Harper Business, a division of HarperCollins. They have made 20 copies available.