A Q&A with Cal Newport

Cal Newport has a penchant for challenging accepted wisdom and exposing a deeper truth in our work lives. His new book explains why the technology taking over our work is undermining our ability to do it to our greatest ability.

"No one ever changed the world, created a new industry, or amassed a fortune due to their fast email response time."
—Cal Newport

Cal Newport is quickly becoming one of my favorite authors. His ability to hold accepted wisdom up to the light, turn it on its side, and expose the thinness of its merit reminds me of what Bill James has been doing in baseball writing for thirty-odd years. I like to think that if Cal can keep it up, perhaps how we manage our work will change just as dramatically because of Newport's research and insights as the general management of baseball has due to James's.

Cal Newport is an Assistant Professor of Computer Science at Georgetown University, who specializes in the theory of distributed algorithms. He previously earned his Ph.D. from MIT in 2009 and graduated from Dartmouth College in 2004.

In addition to his academic work, Newport is a writer who focuses on contrarian, evidence-based advice for building a successful and fulfilling life in school and after graduation.

His latest book, Deep Work, flips the narrative on impact in a connected age. Instead of arguing distraction is bad, he celebrates the power of its opposite: the ability to focus intensely on cognitively demanding tasks; a skill he calls “deep work.” Dividing this book into two parts, he first makes the case that in almost any profession, cultivating a deep work ethic will produce massive benefits. He then presents a rigorous training regimen, presented as a series of four “rules,” for transforming your mind and habits to support this skill.

His previous book, So Good They Can’t Ignore You (Grand Central, 2012), argues that “follow your passion” is bad advice. Since its publication, it has been selected for several best business books of the year lists, including those by Inc. Magazine, The Globe and Mail, and 800-CEO-Read. Newport’s New York Times op-ed on the book became the paper’s most e-mailed article for over a week.

Newport is also the author of three books of unconventional advice for students: How to Be a High School Superstar (Random House, 2010), How to Become a Straight-A Student (Random House, 2006), and How to Win at College (Random House, 2005). The How To student series has sold over 125,000 copies since its inception, and Newport has been invited to speak on these topics at some of the country’s top universities, including Harvard, Princeton, MIT, Dartmouth and Duke.

A Q&A with Cal Newport

800-CEO-READ: Your hypothesis in Deep Work is that the ability to do deep work is more important than ever, while it’s also becoming increasingly rare due to network tools (SMS, e-mail, social media and infotainment sites) and most trends in the modern workplace (such as open offices and stand-up meeting cultures). Those trends all point to the importance of speed, agility, quick communication and response times, and constant collaboration in today’s organizations. At a time when employers are pushing these trends and abilities in their workforce, why and how does the ability to perform deep work trump those trends for individual knowledge workers, and why do you believe those that are able to cultivate the skill will thrive?

Cal Newport: Speed, agility, quick communication: none of these behaviors require skill, and none create significant new value in the world. In a knowledge work economy where the mundane and logistical are increasingly succumbing to automation, the behaviors that remain most valuable tend to be those that require intense concentration that pushes hard won skills to their limit.

No one ever changed the world, created a new industry, or amassed a fortune due to their fast email response time.

8cr: You write of the complicated relationship between deep work and collaboration. Assuming most of us will not be building David Dewane’s Eudaimonia Machine anytime soon, how can we structure our work environments and office spaces (and our time within them) to best harness the strength of collaboration without losing the time and ability to dive deep and give undivided focus and concentration to our work?

In my book, I went back and studied some of the original sites that inspired the current open office trend, such as the Bell Labs Murray Hill campus and the MIT Building 20. These hubs of innovation did not force people to work in large, distracting spaces. Instead they leveraged a hub and spoke layout. Everyone had private offices or labs in which they could do the deep work necessary to produce things that matter, but these “spokes” where then connected to common “hubs” that forced people to run into each other when they left their offices.

The key to Bell Labs, for example, was that instead of housing departments in separate buildings, like at a university, they were all placed in one large building bisected by a shared hallway.

If you take the spokes out of this layout and keep people in the hubs all the time you’re missing the point. Collaborative breakthroughs are 5% the serendipitous encounter that gives you a new idea, and 95% the deep, undistracted work required to act on that idea. You have to protect and promote the latter if you want breakthroughs.

8cr: You mention briefly that the one exception to your hypothesis on the importance of deep work may be those in elite management roles, who are required to constantly juggle many things in their head at once, and be informed, in-touch, and accessible in real time, at all times, which creates a “necessity of distraction … highly specific to their particular jobs.” As I was reading that, I was struck by how the fact that distraction is a necessity in those roles may be one explanation for why network tools and other shallow forms of work are so popular in organizations, since it is usually elite management that dictates the tools that are being used by everyone else. Do you think that may be true, and if so how can we convince elite management that the ability to go “offline” and perform deep work is not only essential for us to do our best work, but beneficial to organization, as well?

CN: Managers at all levels, in my experience, like constant connectivity because it makes their lives easier in the moment. The idea that they cannot immediately get the attention of a subordinate when the need something or want to get something off their plate can seem frustrating.

But this thinking is short-sighted. The goal of work is not to make employees’ lives easier (work, by definition, is effortful), but instead to produce value. These objectives are often at odds. An organization that prioritizes deep work can be massively successful. But it would also likely be a place where logistical, planning, and related administrative tasks are harder than we’ve become used to in an age of instant connectivity.

The key to making this transition, I believe, is to treat deep work as a tool that creates great value. When managers start understanding it in these economic terms I thinks its priority will rise.

8cr: You have four rules for Deep Work. Rule #3 is to “Quit Social Media,” which I think is the scariest for many people because it requires giving up what is essentially an addiction. But the hardest rules, it seem to me, are to “Embrace Boredom” and “Empty the Shallows.” To quit social media is relatively simple and straightforward: you simply have to stop using a shallow network tool (or set of those tools—at home and at work) based on a personal cost-benefit analysis, and use that time for deeper work or entertainment. The other two rules require a change in mindset and constant vigilance in how we interact with the cultures we live and work in. Do you think that’s true and, if so, what are some of the measures we can take to protect ourselves from the distractions inherent in our prevailing popular and work cultures?

CN: This is absolutely true. When people first encounter my rules, they think “quit social media” will be the hardest to follow. But it almost never is. Most people feel a great sense of relief once they sign off for good from these services—leading them to wonder why they ever let these ad-peddling, ego-stoking doo-dads eat up so much of their time and attention in the first place!

Where people really struggle, as you note, is with the more systemic changes. If you want to prioritize deep work, for example, you have to retrain your brain to concentrate like an athlete trains muscles. This means you need to slow down; to put down your phone when you get home; to be okay with being bored; to commit your attention to deep, meaningful activities instead of a flurry of internet-fueled nonsense.

This is all hard. It’s like quitting smoking or losing 20 pounds. But it’s also worth it. A life centered on deep work is not just more productive in a professional sense, it’s also a richer way to live.

8cr: You tell us early on that you are not interested in the philosophical debate on what our diminishing focus and concentration means for our society, that you are interested in what it’s doing to work culture. I respect that, and admire that the book focuses so much on work and the working individual. That said, you are clearly interested in how that work translates and permeates into society. You open the book with Carl Jung, and how he was “one of the most influential thinkers of the twentieth century” and able to alter the way we understand human psychology through his ability to create a space and devote time to doing deep work. You also tell us that “A deep life is a good life.” I guess what I'm getting at is: Do not good lives lived together, and deep work done on great questions and problems, lead to a better society? (I told Mr. Newport that he did not have to answer this question, because even though I'm deeply and genuinely interested in his take on it, it seemed somehow like a gotcha, which was not my intention. He graciously, and very intelligently, replied anyway.)

CN: I try to stay focused on the positive. Deep work is a powerful tool. It will make you much more successful. It will make your life more meaningful. And I think its non-controversial to agree that society benefits from having deep work identified as a virtue.

Where I stop short, however, is trying to argue about the intrinsic morality of distraction versus depth, or to identify one as universally superior to the other. For a lot of people and organizations, prioritizing deep work will be a great thing. But I’m not ready to say that everyone must do this.

"An organization that prioritizes deep work can be massively successful. But it would also likely be a place where logistical, planning, and related administrative tasks are harder than we’ve become used to in an age of instant connectivity.

The key to making this transition, I believe, is to treat deep work as a tool that creates great value. When managers start understanding it in these economic terms I thinks its priority will rise."

Come back tomorrow as we ask Cal a few questions about business and books. 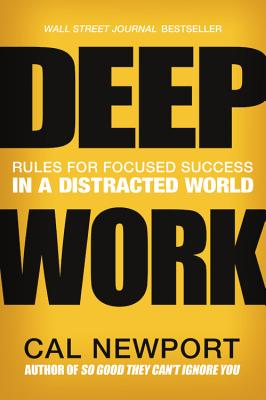