"I'm a gamer, so I like to have goals"
—Jane McGonigal

Jane McGonigal, PhD is a world-renowned designer of alternate reality games—or, games that are designed to improve real lives and solve real problems.

She believes game designers are on a humanitarian mission—and her #1 goal in life is to see a game developer win a Nobel Peace Prize.

She is the New York Times bestselling author of Reality is Broken: Why Games Make Us Better and How They Can Change the World (Penguin Press, 2011) — and is the inventor and co-founder of SuperBetter, a game that has helped nearly half a million players tackle real-life health challenges such as depression, anxiety, chronic pain, and traumatic brain injury.

She has created and deployed award-winning games, sports and secret missions in more than 30 countries on six continents, for partners such as the American Heart Association, the International Olympics Committee, the World Bank Institute, and the New York Public Library. She specializes in games that challenge players to tackle real-world problems, such as poverty, hunger and climate change, through planetary-scale collaboration. Her best-known work includes EVOKE, Superstruct, World Without Oil, Cruel 2 B Kind, Find the Future, and The Lost Ring. These games have been featured in The New York Times, Wired, and The Economist, and on MTV, CNN, and NPR.

Jane is also a future forecaster. She is the Director of Games Research & Development at the Institute for the Future, a non-profit research group in Palo Alto, California. Her research focuses on how games are transforming the way we lead our real lives, and how they can be used to increase our resilience and well-being. Her future forecasting work has been featured in The Economist, Vanity Fair, The New Yorker, O(prah) Magazine, Fast Company, The New York Times Science section, and more.

She is the founder of Gameful, "a secret headquarters for worldchanging game developers."

She has a PhD from the University of California at Berkeley in performance studies, and has consulted and developed internal game workshops for more than a dozen Fortune 500 and Global 500 Companies, including Intel, Nike, Disney, McDonalds, Accenture, Microsoft, and Nintendo. Before joining IFTF, she taught game design and game theory at UC Berkeley and the San Francisco Art Institute.

A former New Yorker, she now lives in San Francisco with her husband Kiyash and two Shetland Sheepdogs, Meche and Tsonga.

Today we begin our three-day residency with Jane McGonigal, whose book SuperBetter: A Revolutionary Approach to Getting Stronger, Happier, Braver and More Resilient—Powered by the Science of Games hits shelves today. The idea of SuperBetter firmly entered our consciousness after Jane's 2012 TED talk, so we thought that was a good place to start her Thinker in Residence feature.

The Game That Can Give You 10 Extra Years of Life

If you can manage to experience three positive emotions for every one negative emotion over the course of an hour, a day, a week, you dramatically improve your health and your ability to successfully tackle any problem you're facing.

If you'd like to learn more about Jane McGonigal, head over to janemcgonigal.com, and then come back tomorrow as we dive into Superbetter with her.

Superbetter: The Power of Living Gamefully 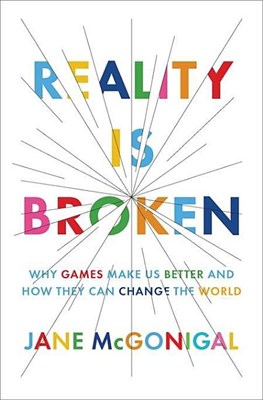 Reality Is Broken: Why Games Make Us Better and How They Can Change the World