Kelly Leonard & Tom Yorton take the secrets of improv from Chicago's famed Second City into the business world to tackle problems with laughter and trust.

About Kelly Leonard and Tom Yorton:

Kelly Leonard is executive vice president of The Second City and president of Second City Theatricals, the division of the company that develops an array of live entertainment around the world, including musicals, opera, and ensembles aboard Norwegian Cruise Line ships.  He has worked at The Second City since 1988 and lives in Chicago with his family.

Tom Yorton is CEO of Second City Works, which provides improv-based training, content marketing, and conference support services to 400+ corporate clients annually. He has formerly held positions at 3COM, Sears, and Ogilvy & Mather. He writes and speaks widely on the power of improvisation and humor to improve individual performance and transform organizations. Yorton and his family live in Barrington, IL.

Our Take on Yes, And: How Improvisation Reverses No, But Thinking and Improves Creativity and Collaboration:

I'm sure all of us could endlessly debate our favorite moment from the Saturday Night Live 40th anniversary special this past Sunday (*cough* Bill Murray's Nick Ocean *cough*), but what's not up for debate is the secret to SNL's long success. And that secret is Chicago's Second City, which has been supplying America (nay, the world) with comedy gold for over 55 years. Originating from Viola Spolin's improvisational games for immigrant children, the theatre opened its doors in 1959 and boasts an alum list that is a literal who's who of comedy. But this, you probably already knew. What you might not know is that since 1989, Second City has been taking its comedy expertise and improv know-how into the business world under their B2B arm Second City Works (formerly Second City Communications). Companies as diverse as Major League Baseball, Clorox, and Farmers Insurance have worked with them to address a multitude of business concerns--from rookie orientation to brainstorming a new ad campaign to non-coma-inducing internal online training.

Their approach is grounded in the Seven Elements of Improv, starting at the beginning with the bedrock concept of Yes, And. Even though I participated in high school theater, I wasn't introduced to this concept until a few years ago while reading Bossypants by Tina Fey (who just happens to be a Second City alum). Fey credits much of her success to saying those two words to every career question she was asked ("We're offering you a job here at Saturday Night Live--can you move here within a week?" Answer: Yes.) The first word, "yes," is a vote of confidence in your partner, a validation. The second word, "and," forces you to be generous and contribute your own ideas to the process. These two words, said together and with frequency, are promised to improve your interpersonal communications, make you a more effective negotiator, and cure childhood cancer. And after reading Yes, And, I believe this could be true. (Well, except for the cancer part, obviously.)

Leonard and Yorton go on to explain each of the seven elements in depth, and with corresponding group exercises and case studies. Among such topics as authenticity, listening, and "follow the follower," the one that struck me the most was ensemble-building. The concept of a group of co-workers being a "team" is not new, but one that the folks at Second City eschews for the term "ensemble." While teams are based around hierarchy, separate sides, and competition, ensembles speak to shared accountability, a unified whole, and collaboration. Of the many reasons to foster an ensemble approach, the one I found most urgent for today's business world is that it directly leads to a more diverse employee base, which is something many industries are struggling with. It's one thing to say, "Yes, we should definitely hire more under-represented groups on our staff," but it's another thing to make a plan for its realization. And beyond that, it's even more critical to make sure your company's culture values those new people and their perspectives when they are hired.

While SNL (and most other network shows) is routinely criticized for their lack of diversity, Second City has been mandating gender equity in all their casts since the '90s. It directly fed into the SNL Tina Fey/Amy Poehler/Rachel Dratch glory days, and has resulted in more women than men enrolling in improv classes at The Second City Training Center. But they realized they weren't doing so great on racial diversity. So under the direction of current CEO Andrew Alexander, they looked at that issue, and created more plans:

There's really nothing like watching a bunch of white liberals faced with confronting true integration in their own backyard. Not everyone was comfortable with Andrew's plan. Everyone championed his idea in theory, but then some lost their enthusiasm when they realized it was going to affect their actual day-to-day job. The most common concern expressed was that The Second City should always hire the absolute "best" improvisers for their ensembles, and by focusing on gender or diversity we might sacrifice quality.

But this concern ignored the underlying principles that define the best ensembles. The best should be defined by how they work as a group—not on an individual basis. It is the very differences within the ensemble that give it power when joined together. No one thinks twice about building an ensemble with diverse skill sets, joining excellent writers with individuals who are stronger actors, and in turn pairing them with the most nimble improvisers. Is it such a leap, then, to think that building an ensemble that also considers socioeconomic background, age, sexuality, gender, or race might result in a group dynamic whose collective perspective might be capable of generating far more powerful and significant contributions to the culture at large than an ensemble where everyone is male, white, and straight?

If a workplace is built on the premise that not one person is right, but all people have something to contribute to the "rightness" of the whole, then you will not only welcome different voices, but they become intrinsic to your survival and long-term growth.

Don't think that this book is imploring you to run with every hair-brained idea your team comes up with, regardless of feasibility or cost. But the structure seems to create a space for hair-brained ideas at least to make a first appearance on their way to potentially becoming great ideas (which as we all know is often the hardest part). It allows for the consideration of ideas just for what they are--unattached from feasibility, budgets, staffing, and the myriad of other very real logistical concerns that will either encourage, morph, or end a project. Like one of their workshop participants said:

Yes, And showed me that you're not going to love every idea, but it helps to love it for at least a little while.

Yorton and Leonard conclude the book with two very useful items: a reference overview of all the exercises described in detail in the previous chapters. And "One Last List"--the words of advice they have gathered over years of working together. Taped to their office wall, it serves as an ever-present guidepost for them and how they approach business. From the big picture (Be curious; Respect, don't revere; Don't be an asshole, and don't abide assholes) to the specific: (Don't check your texts or e-mail when someone else is talking; Say we rather than I whenever possible; Look people in the eye when you meet them.) I love reading other people's personal manifestos; they reveal so much about both their work and non-work selves. What would be on your list? I have a feeling after reading this book, saying "Yes, And" will be near the top of mine.

Buy a copy here, and come back tomorrow for our interview with Kelly and Tom to learn more about Yes, And. 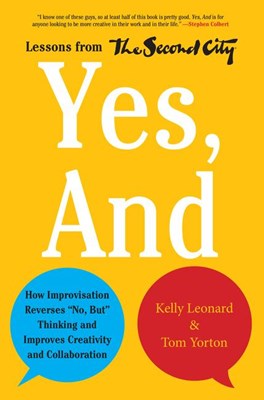 Yes, and: How Improvisation Reverses "no, But" Thinking and Improves Creativity and Collaboration--Lessons from the Second City