In Shadow Courts, Haley Sweetland Edwards reports on the particulars, and the particular problems, of Investor-State Dispute Settlement, the shadow courts that rule international trade.

Most of the issues discussed in a campaign season are more complicated than the typical stump speech—or even a full two hour debate—can address. The issue of international trade may be one of the most complex, and emotional, and as a consequence it one of the issues that gets most dumbed down. Haley Sweetland Edwards' new book, Shadow Courts: The Tribunals That Rule Global Trade, is a testament to just how complicated it is. It focuses on just one aspect of global trade, and her analysis comes in at over 100 pages, with an additional three pages of suggested further reading on the topic. What she writes about is the little known, and critically important, issue of Investor-State Dispute Settlement.

To help wrap our head around the complexity of just this issue, the publisher sent the following Q&A with Edwards, which we thought we'd share with you here.

International trade agreements are complex documents. Why are the “shadow courts” of Investor-State Dispute Settlement (ISDS) such an important component of the agreements that they deserve their own book?

You’re right that modern trade deals are complex and far-reaching. Instead of just dealing with tariffs and quotas—the stuff of old-school trade agreements!—they now deal with labor rights and environmental regulations and human trafficking and rules about intellectual property, and so on. The Trans-Pacific Partnership, for example, has 30 chapters, and at least 20 of them have nothing to do with “trade” in any traditional sense of the word.

So the so-called “investment chapter” is just one chapter in the TPP—and most modern trade agreements. But it’s incredibly important. It’s the only chapter that comes with its own, unique enforcement mechanism: Investor-State Dispute Settlement (ISDS).

It’s hard to overstate how significant that is. Put it this way. In most cases, when a country suspects a trading partner of violating a trade agreement, the complaint goes to the World Trade Organization’s Dispute Settlement Body. There, two nation-states go up against one another—nation to nation—before a panel of representatives from other nations. There’s a hearing. There’s a decision. There’s an appellate body. It’s all very institutionalized.

But the investment chapter—and only the investment chapter—is enforced through this other system, ISDS, which operates in a totally different way. It is the only treaty enforcement mechanism that allows a private corporation or a private investor to directly challenge a nation-state’s public policy before a panel of private citizens, who are not accountable to any state. Think about that for a second: Instead of it being nation versus nation, arguing before a public panel of nation representatives, it’s a private corporation versus a nation, arguing about public policy in what is essentially private arbitration—a tribunal, manned by private citizens.

And these tribunals are very powerful. The three arbitrators not only decide whether a country’s laws or regulations violate the terms of the investment chapter, but also how much a country must pay in compensation for that violation. There is no appellate body. No way for a nation to get a second opinion. And all this takes place without the public even noticing.

Our trade agreements with other countries have become a hot topic during the Presidential campaign because of what these agreements mean for our economy and our relationship with foreign governments. How does ISDS figure into these relationships?

In some ways, it’s a really tricky time to talk about trade—much less, ISDS. As we’ve seen in this presidential election, there’s real anger on both sides of the aisle, from both Bernie Sanders’ and Donald Trump’s supporters, about what people see as failed trade deals in the past.

I would caution against painting ISDS with that same brush. ISDS is different. It is a unique, targeted enforcement tool designed to allow private corporations—the Chevrons, Monsantos and Eli Lillys of the world—to directly challenge public laws and regulations in sovereign nations. It operates on a completely different power dynamic than all the other stuff in trade deals.

Take, for example, TransCanada’s ISDS claim against the U.S. right now. In November 2015, President Obama decided to cancel the Keystone XL pipeline. Two months later, in January 2016, TransCanada, which is the Canadian company that was going to build the pipeline, used the ISDS provisions in NAFTA to challenge the U.S. government’s decision. Whether you think that the Keystone should have been built is beside the point. What’s troubling here is that a foreign corporation—TransCanada—can use this obscure mechanism to force the U.S. government to defend its public policy before a panel of private citizens. Why is that the set-up that we have? Why shouldn’t TransCanada have to go through U.S. courts like every other American corporation? Why should it get special privileges—special access to a judicial remedy—that domestic corporations don’t have?

Interestingly, ISDS splits both parties. Obama, along with Congressional Republicans and big business groups like the Chamber of Commerce, are in favor of it. Elizabeth Warren, along with liberals, libertarians, and Tea Party conservatives oppose it. Why is it so controversial?

It’s fascinating. The thing to remember here is that ISDS is not the same thing as free trade. Aside from the investment chapter being included in so-called “free trade” agreements, it has nothing to do with trade. So, to put that another way, you can be in favor of free trade—you can embrace the idea of lower tariffs and eliminating quotas and tearing down non-tariff protections—and still find ISDS troubling.

That’s one reason that you have libertarians at the CATO Institute—consummate free traders—joining forces with committed, Tea Party conservatives and Elizabeth Warren and other prominent liberals in opposition to ISDS. It’s not a question of whether they think free trade is good. It’s a question of whether they think foreign corporations and investors ought to have special judicial privileges on the international stage that no one else has.

During your research, you spent a lot of time in Argentina, which has been the subject of many ISDS disputes over the last fifteen years. How was that country adversely affected by these shadow courts, how have they handled it, and what is their approach to these agreements going forward?

Argentina is such an interesting case. It’s problematic to talk about in sweeping terms, since each case is different. But the general idea is that Argentina endured a massive, crushing financial crisis in 2001 and 2002. The bottom dropped out of its economy. Million of people were forced into the streets. Millions more went hungry. And foreign corporations lost billions in investments.

In the wake of that crisis, lots of foreign corporations—including dozens based in the U.S.—used ISDS to challenge Argentina for failing to protect their investments. Those corporations asked ISDS tribunals to force the Argentinian government pay them back for the losses they sustained after the financial collapse. In many cases, they succeeded. Argentina has been the subject of at least 54 ISDS cases—many times more than any other nation—and has paid out billions in compensation to foreign corporations.

Now, this sets up a really interesting intellectual question. On one hand, most people would agree that Argentina did not behave impeccably during or after the crisis. Driven by populist anger at the neoliberal policies that the former president embraced in the ‘90s, its government refused to engage with the international community, reneged on its promises, and defaulted, twice, on its sovereign debt.

But on the other hand, Argentina is a democratic nation. Its actions during and after the financial collapse might have been misguided. But they were decisions made by its president and a representative body of elected officials. Should foreign corporations have the power to challenge those decisions outside Argentine courts? Should foreign tribunals, manned by private citizens who are held accountable to no country, be able to force Argentina to pay damages to private corporations for the decisions made by democratically-elected officials?

So, in your opinion, is ISDS a good thing or a bad thing—or is it not that clear cut? How is the U.S. handling this provision in the major trade agreements coming up such as TPP?

The short answer is that I don’t think ISDS is the right system for our complex, modern, hyper-globalized world. ISDS was first articulated and included in investment treaties back in the 1950s, long before globalization was a thing, long before foreign corporations operated massive business networks outside the borders of their home state. So I think ISDS is antiquated. It’s far too easily exploited in the modern context—where mind-bogglingly rich, powerful and litigious corporations define our global economy. But, that said, I think there is room to give private corporations and investors an established—and peaceful—avenue to challenge the policies of nation-states where they are operating. The question is how do we do that? How do we do it thoughtfully—transparently, publicly, and while respecting sovereign nations’ policy space?

The reality is that we’re grappling with a basic, underlying tension. And that’s that nations need to have the ability to pass laws and regulations that serve the public interest. And foreign corporations need to have reasonable property protections when operating abroad. So how do we thread that needle? When does a legitimate law, passed in the public interest, cross over into violating a corporation’s property right? And who decides?

One solution that’s thrown around, particularly among European liberals, is to simply remove investment protections from the purview of international treaties. If a corporation wants to set up shop in a foreign nation, why not allow it to negotiate the specific terms of its agreement with its host nation directly? If that host nation agrees to submit the terms of the agreement to an international arbitration, so be it.

Another, less sweeping solution is the European Union’s Investment Court System, which creates a robust institution designed to address these issues, complete with an appellate court. The idea is to give foreign corporations a forum to have their grievances heard, while setting up protections for sovereign nations’ policy space. It’s brand new, and untested, but it has potential to be a fair way forward.

Haley Sweetland Edwards is a correspondent at Time. Previously, she was an editor at the Washington Monthly, where she wrote about policy and regulation. From 2009 to 2012, she lived and worked in the Middle East and the former Soviet Union, where she wrote for The Los Angeles Times, The Atlantic, and The New Republic, among other publications. She studied philosophy at Yale and journalism at Columbia University's Graduate School of Journalism. She lives in Washington, D.C. 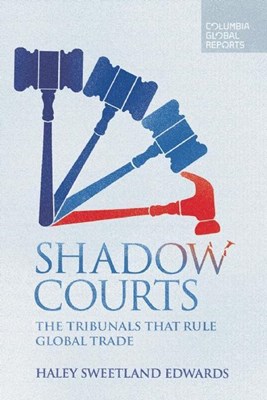