Tess Vigeland talks about he leap she made, and how to know when it's time for you to make yours.

"A Gallup poll a couple of years ago found that fully 70 percent of American workers are disengaged from their jobs. It's not a stretch to assume that many of them have asked at what point they'll just have to say 'Uncle!' Even if you love your job, or your company, or on the contrary you feel like you have to stay in a job you don't like because of financial obligations... sometimes it just tugs at you. 'I gotta go. I just have to go.'"
—Tess Vigeland

Tess Vigeland is a veteran journalist, and a well-known voice to millions of American radio listeners. She is the CEO of Tess Vigeland Productions, a Los Angeles-based multi-media company. Tess spent 11 years as an anchor for public radio's Marketplace, including six hosting the personal finance show Marketplace Money. Her new book, Leap: Leaving a Job with No Plan B to Find the Career and Life You Really Want, comes out today. When she's not locked away writing, Tess can be heard as a backup anchor for NPR's All Things Considered, as well as KCRW's To The Point and KPCC's Take Two in Los Angeles. She also serves as a professional emcee, speaker, panel moderator, and interviewer for conferences and other events. Tess also writes for The New York Times and The Guardian, among numerous other publications.


Here's the rest of her story:

I had my dream job in broadcast journalism for 20 years. For a good chunk of that, I anchored a national radio show about personal finance for public broadcasting's Marketplace. For various reasons, I quit that job in the fall of 2012 without having Plan B lined up, or even any idea what I wanted to do next. I flailed around for several months, berating myself for the most foolish decision of my life. Meantime I came deliciously close but got rejected for what would have been the second job-of-a-lifetime. Then, in July of 2013, I gave a speech about all this to an auditorium of nearly 3,000 strangers and an editor from a major publishing house was in the audience and 11 days later I landed a lucrative book deal.

It's been an incredibly fortunate time for me, and you can read about the journey on the pages of my website, and also by subscribing to my newsletter (there's a link on the front page). I don't spend as much time on Twitter as I probably should, but you can still follow along for what I'm reading about and writing there, and I love meeting new friends on Facebook, so feel free to send a request (this is a link to my personal page—there are also links to my professional author page all over this website).

I started my career as a reporter at the public radio/TV station in Portland, Oregon, after graduating from the Medill School of Journalism at Northwestern University. My official bio could tell you about all the snazzy awards I won as a reporter, but I'm pretty sure you'd rather hear that the story that made my career involved a certain figure skater whose husband and a band of thug idiots whacked Nancy Kerrigan on the knee in 1994 and launched the story-that-would-not-die. Yes, I covered Tonya Harding for public radio for months because she was from Portland, and to this day I thank her for her service to my career. I also hosted a weekly television show called Seven Days and produced an hour-long documentary about safety issues at the U.S. Army chemical weapons depot in Eastern Oregon. But really, it's all about Tonya.

After four years at OPB, I was asked to join the toy department, i.e. the sports show, at public station WBUR in Boston. I reported and backup hosted for NPR's Only A Game, and after leaving that program, served as a general assignment reporter for the station. After that I left journalism for the private sector for three years, working for a high-tech PR agency during the dot-com boom-and-bust. Someday I need to write a whole other book about that experience.

In 2001, I got the surprise of a lifetime when my favorite public radio show, Marketplace, called to ask if I was interested in moving to Los Angeles to anchor its overnight broadcasts. Why yes, I certainly was, and for the next 11 years, I covered business and economics in the way only Marketplace can—with creativity, panache, and the ability to explain the unexplainable (collateralized debt obligations, anyone?). For six of those years, I hosted the weekly personal finance program Marketplace Money, where along with guest experts, I took calls from listeners and tried to help with their most intractable money management questions. I also traveled the country for live stage shows of Marketplace and Marketplace Money. And just before I left in fall of 2012, I got a fancy award—the first-ever Excellence in Personal Finance Reporting Award from the Radio Television Digital News Association and the National Endowment for Financial Education.

I've written and reported for The New York Times, The Guardian, and numerous other publications, and now I'm a frequent guest host at public stations KPCC and KCRW in Los Angeles, as well as NPR's All Things Considered. I do all kinds of emcee work, including keynote speaking, and onstage interviews at conferences. I'm also dabbling in voiceover, and have served as the voice of the Pasadena Tournament of Roses digital program guide for the 125th and 126th Rose Parades.

I love animals and spent years raising money for the Pasadena Animal League and Pasadena Humane Society. In my late 30s, I also went back to the first love of my life, classical piano, and studied at the Pasadena Conservatory of Music. One of the scariest things I've ever done was give a solo recital when I turned 40—but it went remarkably well! In the fall of 2012, I actually ran a half-marathon (and will never, ever do so again), and now, while I finish up writing my book, I'm also teaching myself photography. (That's a link to my photo website, and my Instagram feed is below.)

I'm still not sure what my second career is going to look like, but I'm having an awful lot of fun while I figure it out. There's nothing I love more than hearing from former listeners and others who want to share their stories. Please get in touch and say hi. But before you do anything else... be sure to make a pledge to your local public radio station!

In response to the question she gets asked most often these day, Tess recently wrote a LinkedIn article (that she was kind enough to share with us here) about...

How to Know When You've Gotta Go

Then I left. And nobody could believe it! "What the hell are you doing?!" they asked. I don't know, I replied, but I just feel like I have to call an audible and switch up the play. Except I'm a terrible quarterback and I have no idea which play to call. I had no idea what I wanted to do next. I quit without anything else lined up, which you are never, ever, EVER supposed to do. (I should know – I hosted a personal finance show for six years.)

Here's the question I get more often than any other: "How did you know when it was time to go?" A lot of employees ask themselves that question on a regular basis. We know that because a Gallup poll a couple of years ago found that fully 70 percent of American workers are disengaged from their jobs. It's not a stretch to assume that many of them have asked at what point they'll just have to say "Uncle!" Even if you love your job, or your company, or on the contrary you feel like you have to stay in a job you don't like because of financial obligations... sometimes it just tugs at you. "I gotta go. I just have to go."

But for all I've said here, I can't really tell you how you'll know. Only you can figure that out. Only you can make that decision. I made the decision in a singular afternoon when I decided that I'd had enough, and that I'd come home in tears one too many times. I loved my job. I was really good at it. And I was terrified of what would come next.

But leaving was the right decision, as difficult as these last three years have been. Don't stay with something that's not working for you. You will find another place for yourself. You get one shot at this life and if you're not finding at least some element of joy in the thing you do for many, many hours out of each day... go. It's time.

"Don't stay with something that's not working for you. You will find another place for yourself. You get one shot at this life and if you're not finding at least some element of joy in the thing you do for many, many hours out of each day... go. It's time."

We gave away twenty copies of Leap last week, and while that giveaway has ended, you can read the review we wrote for it there.

Come back tomorrow, when we'll ask Ms. Vigeland some questions about her new book, Leap, how best to make a leap, and how to help a loved one through the process. 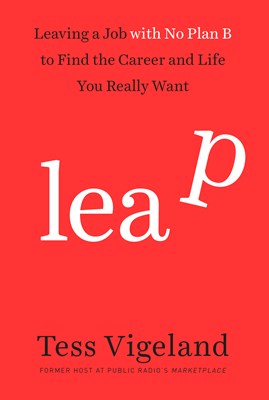 Leap: Leaving a Job with No Plan B to Find the Career and Life You Really Want