Thinker in Residence: A Q&A with Ryan Holiday

"Our perceptions and inner dialogue determine to a large degree what what we are capable of. And if they push us towards acting instead of passivity, it becomes a feedback loop that becomes easier over time. " ~Ryan Holiday

"Our perceptions and inner dialogue determine to a large degree what what we are capable of. And if they push us towards acting instead of passivity, it becomes a feedback loop that becomes easier over time."

Q&A with Ryan Holiday on The Obstacle Is the Way: The Timeless Art of Turning Trials Into Triumph

Ryan Holiday is a successful young PR and media strategist. You'd think that, as such, the lessons he has to teach us would be bogged down in the minutiae of how to get the most clicks or eyeballs, or how to optimize your online presence, and I'm sure he could talk about all of that at length, but his writing and his work always strives to connect us to larger, more timeless questions and themes.

Beside having one of the more unique, off-the-beaten-path reading recommendation email lists going, he is also constantly referencing people like Marcus Aurelius, the Stoics, and well... you'll see.

Here is part one if our interview with Mr. Holiday.

1. How can the obstacle, the thing we're trying to avoid, be the very answer to our problem?

I think it has much more to do with the person and the attitude they bring to obstacle than the obstacle itself. There's the great line from Andy Grove, which I quote in the book, "Bad companies are destroyed by crisis. Good companies survive them. Great companies are improved by them."

I don't think Andy Grove was intentionally using the principles of the Roman philosophy known as Stoicism but the principle is the same. What they proposed was essentially this: in any and every situation—no matter how bad or seemingly undesirable it is—we have the opportunity to practice a virtue. As Marcus Aurelius, whose quote leads the book put it, "The impediment to action advances the action. What stands in the way becomes the way."

If someone you love hurts you, that would be a chance to practice forgiveness. If your business fails, now you can practice acceptance (or to try some new business strategy). If there is nothing else you can do for yourself, at least you can try to help others. A bad company is wrecked by adversity; a good company finds advantages and opportunities to improve in adversity.

That's what I want people to see. Whatever problem you're facing, whatever the situation is holding you back, with the right perception, discipline, and strength of will, we can answer any question or dilemma life is forcing upon us.

2. In the book you mention the difference between 'being present' and 'the work of presence.' How can people implement that work as a discipline in their lives and business and what effect might it have?

One of the points I make in the book is you can take whatever problem you're dealing with and use it as opportunity to focus on the present. Instead of being overwhelmed with the circumstances you find yourself in you can learn to be content with what you're doing, as you are doing it. Instead of trying to force the future to be what you want it to be, you can focus on the moment, not the unknowns that may or may not be up ahead.

But because of our culture I don't think this comes easy, so it takes work. I think you have to find whatever method works for you, but I think things simple things like getting away from the screen and exercising, meditation, or getting a dog are all great ways to to pull yourself out of thinking about the way you wish things to be. By discarding distracting thoughts and leaving things well enough alone you can have a focused mind to act in the present.

The benefits of doing this are seen in all of the companies that were founded during depressions or economic crises, which include giants like FedEx, General Motors, and Microsoft. The founders of all these companies knew they were in difficult economic times, but they were too busy living in the present and actually dealing with the situation at hand to bother to think whether it was the "worst ever" or when it would be over or what caused it. Instead of being paralyzed about a macroeconomic crisis, they focused on meeting payroll that week.

So I think the larger point is it doesn't matter whether this is the worst or the best time to be starting a business or changing careers. There will always be obstacles standing in your way, what matters is what you do in the present.

3. Perception and confidence are two powerful themes within the book. How do you see the relation between the two?

There is definitely a relationship between the two. How we perceive the events in our lives is directly related to how confident we'll be in acting towards our goals.

A great example I talk about in the book is the oil magnate John D. Rockefeller. He took his first job a weak young man at sixteen. Two years later, just as Rockefeller was getting his footing and starting to make a name for himself, the Panic of 1857 struck and wrecked everything. But because Rockefeller kept his head and could manage his own perceptions while chaos was ensuing all around him, he was able to out-think and outmaneuver these seasoned businessmen that were losing their shirts in the panic. In fact, you could argue—and a lot of biographers do—that Rockefeller was made by this crisis and all of that followed it, including the crash of 1929 later in his life.

So I think our perceptions and inner dialogue determine to a large degree what what we are capable of. And if they push us towards acting instead of passivity, it becomes a feedback loop that becomes easier over time.

4. How much, or how little, should we think about the decisions we will make, or have made?

Well of course you should think about your decisions, but I think we need to keep a few important things in mind. One, we ought to lean towards action with our decisions. As Theodore Roosevelt put it, "I'd rather wear out than rust out." But two, we have to understand that our decisions are only a small part of the equation. What I admire about past generations is their humility towards a world they don't control. They made decisions but understood that that was by no means the end of it. Life could and often did intervene.

Nietzsche called it Amor Fati—a love of fate. In the book I talk about Thomas Edison's research and production campus burning to the ground. Instead of having a breakdown, Edison was excited. He found his son at the scene and said, "Go get your mother and all her friends, they'll never see a fire like this again." A pretty unusual reaction I agree, but what could he have done about it? Instead of wallowing in his misfortune, Edison had his factory back up and running in three weeks. He was energized by the whole thing.

To tie those two thoughts back together, if and when we fail, we shouldn't dwell on it and let it prevent us from acting again. Wendell Phillips said, "What is defeat? Nothing but education; nothing but the first steps to something better." Engineers at startups now like to quip: Failure is a Feature. The one way to guarantee we don't benefit from failure—to ensure it is a bad thing—is to not learn from it. With each and every action and failure the world is giving you feedback and it's up to listen and learn from it.

5. So much of our work and culture centers around the gain of some kind of prize or goal. How can we do better work without focusing on that kind of "accomplishment?"

I've found the best way to not focus on the end game is to love the process of what you do. Nick Saban, the head coach of the University of Alabama—maybe the most dominant dynasty in the history of college football—teaches what he calls The Process. He says, "Think about what you needed to do in this drill, on this play, in this moment. That's the process: Let's think about what we can do today, the task at hand."

You can control the process, your effort and your intentions, but not the outcome. So instead of being worried about the outcome, you can be content to simply do what you need to do right now and to do it well. To follow the process without being anxious about the prize.

The process is about being able doing the right things, right now. Because we understand that we don't get to choose what happens to us, but by accepting our fate we can always choose how we feel about it.

Check in with us tomorrow as we conclude our Thinker in Residence series with more of Ryan Holiday's reflections, and recommendations on business and books and business books.

Learn more about our Thinker in Residence, Ryan Holiday, and read a review of his latest book, The Obstacle Is the Way. 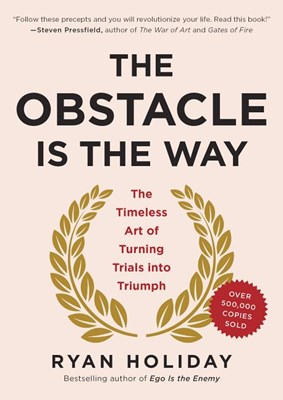 The Obstacle Is the Way: The Timeless Art of Turning Trials Into Triumph