"The most dangerous person in the world is a person with no hope. " ~John Hope Bryant

"The most dangerous person in the world is a person with no hope."

John Hope Bryant is today responsible for more than $1.5 billion of private capital supporting low-wealth home ownership, small businesses, entrepreneurship and community development investments through Operation HOPE in under-served communities across the U.S., as well as investments in financial literacy programs and financial dignity education from South Africa to Morocco, to Saudi Arabia.

A TIME Magazine 50 (Leaders) for the Future (cover story, 1994), and an Oprah's Angel Network award recipient, John Hope Bryant is a "silver rights" entrepreneur and businessman, author, thought leader, philanthropist and the founder, chairman, and chief executive officer of Operation HOPE. Bryant has been an advisor to the last three sitting U.S. presidents, and his work has been recognized by the last 5 U.S. presidents.

Former U.S. President Bill Clinton described Mr. Bryant in his bestselling book Giving saying, “John Bryant is a 41 year-old whirlwind of ideas and action. Lean, intense, focused, and completely positive in his belief in the potential of poor people to prosper, with ‘a hand up and not a hand out." John Hope Bryant is one of the most authoritative and compelling advocates for poverty eradication in America today.

"This is a place where the new, twenty-first-century definition of freedom is expressed as self-determination—the opportunity that comes from one’s own hands and one’s own bold ideas connected to action, personal risk, personal investment, and hard work. "

Our take on John Hope Bryant’s new book, How the Poor Can Save Capitalism: Rebuilding the Path to the Middle Class

John Bryant has written the book I’ve been waiting to read for years now. It is a book that shows how the economic engine of capitalism—an engine that has been building a burgeoning middle class all over the world as markets have opened up to it in recent decades—can be put to use to address the economic inequality and inequity right here at home, and help grow the American economy at the same time. Or, to rearrange and paraphrase the title of the book a bit, it is a book about rebuilding a navigable path to the middle class for poor folks and using that path to spur the growth that American capitalism needs to survive and thrive. It is, as the title suggests, how the poor can save capitalism.

But why does capitalism need to be saved? There is a line in the book that Bryant repeats time and time again that I think perfectly illustrates the point:

The most dangerous person in the world is a person with no hope.

It is true, and there are too many persons in America with no hope. And, at the moment, most of those without hope have too little access to (or education about) the financial tools that could give them a foothold for a better life. There are too many persons that have an openly adversarial relationship to the system, or are forced into the underground economy (or to barely above-ground predatory lenders) in which the mechanisms of credit keep people down instead of giving them a leg up. This not only robs people of hope and doesn’t add anything to the economy, it actively undermines it.

John Bryant understands the importance of hope—it’s literally his middle name—in the process of changing that reality. He founded America’s first non-profit social investment banking organization, Operation HOPE, to help poor people in under-served communities build financial dignity. In his new book, How the Poor Can Save Capitalism, he provides the rationale for this work of investing in and “harvesting the plot of the poor,” and a plan to do so that would boost the economy and help rich and poor alike. It is a bold, yet pragmatic vision and an angle of hope that eschews the dogma and ideology of most commentators. As he says:

This book is about saving America and returning her to her original promise, her original founding ideas and ideals. It is about planting, nurturing, and growing a sustainable middle class, creating once again what my friend Steve Bartlett, former president and CEO of the Financial Services Roundtable, calls a “light on the hill.” This is a place where the new, twenty-first-century definition of freedom is expressed as self-determination—the opportunity that comes from one’s own hands and one’s own bold ideas connected to action, personal risk, personal investment, and hard work. This book is about creating a new, sustainable business plan that returns this country to its original big, bold, audacious dream. This idea is both utterly liberal and the very definition of conservative at the same time.

He puts it slightly more provocatively when he says:

In an environment that has grown increasingly partisan and divided on these kind of economic issues, Bryant has served on presidential committees under presidents George W. Bush (as vice chairman of his Council on Financial Literacy and chairman of his Council’s Subcommittee on the Underserved) and Barack Obama (as chairman of the Subcommittee on the Underserved and Community Empowerment) so he has a track record of breaching the partisan divide, or ignoring it altogether, to work on real-world solutions.

His mission extends a great American tradition. It is in the tradition of Abraham Lincoln’s vision for the Freedman’s Savings Bank, whose radical mission “to teach recently freed black Americans about money” could not survive the neglect and outright derision of Lincoln’s less enlightened presidential predecessor, especially when combined with the Panic of 1873. It is in the tradition of Dr. Martin Luther King Jr.’s final movement, the Poor Peoples Campaign, “which was inclusive of all races, cultures, and creeds, because he knew that we are all in this together.” Bryant cites both as influences, and extends their work into the modern era by advocating for a “silver rights” movement to build financial literacy in poor communities, spreading seeds of hope and financial empowerment, and ensuring that poor people have a legitimate shot at that “twenty-first-century definition of freedom”—self-determination.

To do this, he asks us to reimagine (a word he uses often) a lot of things we think we know—from the definition of poverty and where wealth comes from to the idea of America itself. And, to hear him tell it, we are ripe for a rebirth if we can do so:

It’s time for a rebirth of America, in America, by America. It’s time for us to reimagine everything. Currently, we are comfortable helping the poor with philanthropy, government assistance, or microfinance, but these solutions are all inadequate. The poor don’t just need “help”; they need investment. They need to be treated as customers and job creators. The main driver of freedom in the world today is not the vote but access to capital and knowledge about how to use it (self-determination). That means financial literacy education, financial capability, and financial and economic empowerment. If people don’t understand the global language of money, and if they don’t have a bank or credit union account, they are simply an economic slave. Thus, access to finance and financial literacy is a new civil rights issue.

And the fundamental force of the book is this question:

What might happen if we … place faith and confidence in and support those who can actually lift our economy—who already do, through their consumer spending alone? Just imagine if we viewed the poor as something other than a tool to be used, taken advantage of, and taken for granted. What if we actually valued the poor? After all, the rich need the poor, if for no other reason than to remain rich themselves.

National politicians pay a lot of lip-service to rebuilding the American middle class, but you’ll hear very few even mention the American poor. (Or, if they do, it is to disparage them, to describe them as “takers” instead of “makers,” a popular talking point prevalent amongst today’s talking heads.) But, even if they’re not talking about it, John Hope Bryant has gotten the last three presidents to put some attention on poverty issues. And rather than simply advocating for the poor, John Hope Bryant brings them financial education. Rather than simply alleviating poverty, he is pioneering an approach that could eradicate it. As he says:

America is not a country; it is an idea. And we can reimagine it to be anything we like.

Can we imagine it as a place free of poverty?

As American capitalism has been busy reaching into new markets, pulling people out of poverty, and building a burgeoning middle class in places like Beijing and Bangalore, the middle class in places like Detroit and Philadelphia is being slowly (sometimes not so slowly) dismantled. It is time to reverse that trend, and John Hope Bryant is in the vanguard of the movement to do so.

"America is not a country; it is an idea.
And we can reimagine it to be anything we like."

You can read a manifesto from John Hope Bryant on ChangeThis. And check back tomorrow for an interview with Mr. Bryant focusing on How the Poor Can Save Capitalism. 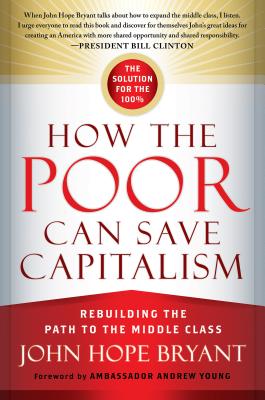