Jack Covert Selects - Give and Take

Give and Take: A Revolutionary Approach to Success by Adam Grant, Viking Books, 320 pages, $27. 95, Hardcover, April 2013, ISBN 9780670026555 “I want to explore what separates the champs from the chumps,” says Adam Grant in the first chapter of Give and Take. Grant sets this up with an explanation of three different personality types on a spectrum of reciprocity: takers, matchers, and givers.

“I want to explore what separates the champs from the chumps,” says Adam Grant in the first chapter of Give and Take. Grant sets this up with an explanation of three different personality types on a spectrum of reciprocity: takers, matchers, and givers. Givers and takers are exactly what they sound like, and matchers are the ones in the middle who do a little of both. While we all know and probably dislike takers, and most of us really operate as matchers, Grant argues that there are great benefits to being a giver.

Leading this case-rich study on interaction is Grant’s demonstration of the phenomenon in which givers are both the best and the worst performers when it comes to measuring overall success. He begins with the case of David Hornik, a venture capitalist who takes a “giver” approach to pursuing his friend’s newest startup idea. Hornik doesn’t end up making the deal, and he initially attributes it to his approach. Was he too generous, too friendly? This case is a perfect opener, because it demonstrates both of the potential outcomes that givers can experience. Nice guys—givers—can certainly finish last. However, Grant later supplies a valuable coda to this story. After a few months had passed, Hornik received an offer to buy in to his friend’s startup. It turned out that his giver attitude (not to mention his reputation for success) were too irresistible in the long run. And this is an essential point: givers might lose some in the short term, but they usually win in the long term.

Throughout Give and Take, Grant gives a 360-degree perspective of givers and takers. He demonstrates the importance of distinguishing givers from takers and fakers, and how to operate like a giver without simply becoming a conduit for a selfish acquaintance’s will. And while you might feel compelled to help solve everyone’s problems, that compulsion might also harm you in the process, so he offers advice to givers to avoid the risk of being stretched too thin.

This whole idea of operating like a giver is especially relevant today. Many workers don’t consider themselves to be part of a team in the workplace. We might have inherited our parents’ or grandparents’ worldview, based on a manufacturing economy in which most workers operated independently of each other, completing their own tasks. The American economy today is more service-oriented than ever. According to Grant, more than 80% of Americans now work in the service sector. Whether we realize it or not, we are often working with people to produce results for people. How we interact with people on all sides of our work is exactly the point at which we can consider Give and Take.

Maybe “How will you get ahead?” is not the question to be asking. Instead, ask yourself, “How can I help?” 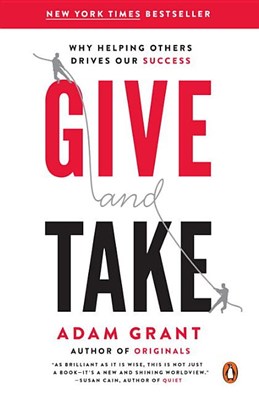