Not many writers can craft an engaging 250 page book around seemingly mundane subjects such as glass and freezing, but Steven Johnson can.

Not many writers can craft an engaging 250 page book around seemingly mundane subjects such as glass and freezing, but Steven Johnson (Where Good Ideas Come From) has a talent for literary, scientific explanation that connects these subjects to historically important, transformative ideas and innovations. His new release, How We Got to Now, continues Johnson’s exploration of the “hummingbird effect”—when “an innovation, or cluster of innovations, in one field ends up triggering changes that seem to belong to a different domain altogether”— by revealing how six taken-for-granted technologies (glass, cold, sound, clean, time, and light) changed the world.

By employing long-zoom historical context, Johnson reveals how innovations are born out of “collaborative networks” with adjacent possibility, not, as is widely perceived, from lone, genius innovators. In the chapter on sound, Johnson connects a 19th century printer’s hobby interest in anatomical drawings of the human ear to our eventual ability to track underseas weapons (Sonar) and the ability to determine the sex of our unborn children (ultrasound). In the Cold chapter, the path to fertility options for would-be parents via frozen embryos went through Clarence Birdsey’s ice fishing excursions on the remote tundra of Labrador. Flash freezing of his frozen food products set in motion American southward migration due to air conditioning, transforming the American political landscape and causing vast cities to bloom in the desert.

One of the better illustrations of adjacent possibility sparking innovation comes when Johnson shares a quote from AT&T executive John J. Carty in 1908 arguing that “the telephone had had as big of an impact on the building of skyscrapers as the elevator.” Carty wrote:

It may sound ridiculous to say that [Alexander Graham] Bell and his successors were the fathers of modern commercial architecture—of the skyscraper. But wait a minute. Take the Singer building, the Flatiron Building, the Broad Exchange, the Trinity, or any of the giant office buildings. How many messages do you suppose go in and out of those buildings every day? Suppose there was no telephone and every message had to be carried by a personal messenger? How much room do you think the necessary elevators would leave for offices? Such structures would be an economic impossibility.

As a general reader, I’d read a Steven Johnson book about brussels sprouts; the man simply knows how to put words together. As a business reader, I appreciate Johnson’s ability to reframe how we think about business topics. When tackling innovation, Johnson makes us realize that creativity comes from paying attention to what happened before us and what is happening around us across all disciplines and domains, even if, and sometimes especially if, there is no obvious connection to what we’re doing, or trying to do. We don’t have to be lone, genius innovators because, quite frankly, they don’t exist. 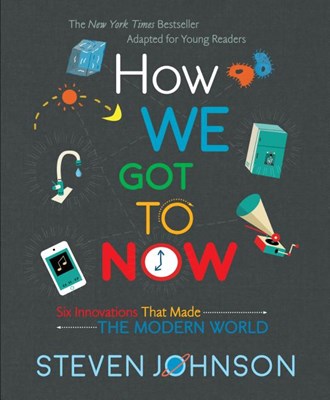