In 2005, I was late to the game on a great book, Travels of A T-Shirt In The Global Economy. It flew under the radar of most everyone until it was named as a finalist in the FT/Goldman Sachs Business Book of the Year competition. The book is a wonderful narrative and describes Pietra Rivioli's journeys to find out where her $12 T-shirt came from. There is another book out this month which has the same wonderful characteristics.

Oil on the Brain is written by journalist Lisa Margonelli. She became fascinated with oil's grasp on American society. Margonelli talked to people in the industry, and the more she talked, the further away she felt from the real things that influence energy production. In the book, she walks the reader back through the entire process by which gasoline gets into your automobile's tank.

The book starts at the end--at Twin Peaks Petroleum. Owner Michael Gharib owns the independent gas station in San Francisco and says he makes more money selling water than gasoline. Industry statistics say he loses over $11,000 a year in "merchandise shrinkage." For Michael it was worse—a manager stole $70,000 over an 18-month period. Margonelli skillfully weaves into the first chapter the history of the gas station (the first open in 1907), our true desires (cup holders are higher priority than fuel economy) and how little we process how much we pay. Consider this:

If you ask people whether they're being hurt by high gas prices, they will answer emphatically. Between 2003 and 2005, the price of gasoline increased by an average of 77 cents a gallon—really a huge jump. But when the Harris poll asked people to estimate how much more they were spending per month on gas than in previous years, answers for the difference between 2003 and 2005 added up to an increase of $3 per gallon. They overestimated gas price increases by nearly four times.

Margonelli's travels only get more interesting. She rides with fuel delivery driver Roger who can't drive over 50 miles an hour for fear of losing his license, visits the "molecular butchery" (e.g. refinery) in Carson, California, and flies to Chad to find out how oil will change the tenth poorest country in the world. It is the combination of fascinating statistics and real people in the industry that creates such a compelling narrative. It is How Things Work in the form of a Grisham novel.

So, here is the way I see it. There are five spots on the FT/Goldman Sachs 2007 list. The question now is what the other four will be. 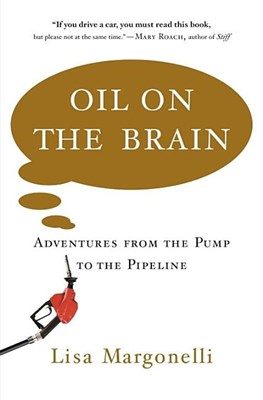 Oil on the Brain: Adventures from the Pump to the Pipeline