Jane Gleeson-White explains how accountants can save the planet by taking into account more than just financial and manufactured capital. Jane Gleeson White’s new book tells us how, after repeated and ongoing efforts from activists, so-called “ethical investors,” scientists, and politicians to help halt the damage being done to the environment by humanity’s economic activity, it may be accountants that save us.

The book documents the growing movement toward what Robert K. Elliot of accounting firm KPMG has called the “Third Wave” of accounting. Elliot took the idea of waves from Alvin Toffler’s 1980 book, The Third Wave, and Gleeson-White uses it to put the economic moment we find ourselves in into a larger context, to show just how big a shift it really is in human history.

The “first wave” was the advent of agriculture and the invention of writing—that era’s information technology—to keep accounts of agricultural production.

The “second wave” was the rise of the industrial age and the double-entry accounting system—invented centuries earlier but as necessary to the industrialization of the late eighteenth century as writing was to organizing Mesopotamian agricultural society into the first cities around 9000 years earlier. It’s communications technology was the book (hence “book-keeping”), and Gleeson-White’s first book was Double Entry: How the Merchants of Venice Created Modern Finance, so this is a “wave” Gleeson-White knows well.

The “third wave” is the Information Age, digital technology, and the accounting revolution now taking place. It includes “Two big forces [that] have thrown traditional financial reporting into turmoil, making novel and unprecedented demand on it. These are the networked computer and the various crises of the natural world … ”:

The first has given rise to the idea of intangible value or immaterial wealth, such as capital, image, confidence, brand recognition, fashion; the second to the ideas of sustainability.

A great thing about this book is that it references so many works that came before hers. There are so many books referenced that I have effectively doubled my reading list. One of those books added was Natural Capitalism by Paul Hawken, Armory Lovins, and L. Hunter Lovins.

Because we treat the wealth of nature as free, the authors of Natural Capitalism argue, our current form of capitalism is “a financially profitable, nonsustainable aberration in human development” which does not obey its own accounting principles: “It liquidates its capital and calls it income”—in other words, it is the greatest Ponzi scheme ever perpetrated.

That sounds like an indirect rebuttal to a certain Oklahoma Senator’s statement that “Global warming is the greatest hoax ever perpetrated on the American people.” But this is not a book that argues with the forces of the past. It simply explains them, addresses the present, and imagines the future.

So, while her previous book’s final chapter dealt with the failure of GDP as a measure of national economies, her new one grapples with alternatives to national accounting. The two biggest questions she had herself after finishing Double Entry being if accounting could be expanded to account for supposed “externalities” like natural resources, and if the modern corporation was in need of psychological intervention, she sought out the answers (hint: “yes”), and devotes the last two thirds of the new book to laying out exactly how that could look. It is a hopeful, but realistic look at the present. Rather than tilt at windmills and argue against the burgeoning power of corporations (“In 2000, it was estimated that 51 of the largest 100 economies in the world were not countries but multinational corporations”), it shows how we can shift their psychology. The way to do that is to have them start accounting for “six capitals,” including the two on the books now—financial and manufactured—and adding in intellectual, human, social and relationship, and natural capital.

No one has ever bought a product from a company because their balance sheet looked good. Increasingly, the traditional kind of “financial accounting” most companies use isn’t even enough for investors to make a rational decision to invest in them or not. It may be a measure of current financial success, but it is not a measure of real, lasting, sustainable value—the kind most of us hope we, and the companies we work for, contribute to the world. And it is therefore not a measure of lasting value or long-term success, or of a good investment. But accountants can, and are beginning to change what they account for, and they could save the world in the process.

Whereas Double Entry was a wonderful work of accounting history, Jane Gleeson White’s Six Capitals is an ambitious look at what we will account for in the future. 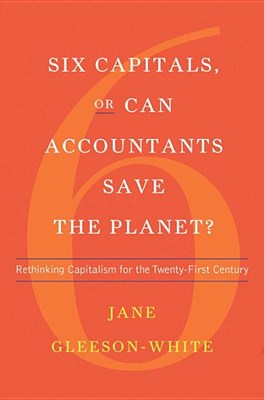