Dorie Clark returns with new wisdom on building your reputation as a thought leader. Find your idea—find your audience.

My understanding of Shakespeare was eternally changed by a professor who introduced to me a hermeneutic circle depicting Shakespeare's recurring narrative framework. Virtually every comedic work he wrote adheres to this same framework. Beyond that, almost every mainstream film and and television sitcom adheres to the same framework that Shakespeare perfected. I thought of this while reading Dorie Clark's Stand Out. Clark actually references Star Wars, and mythologist Joseph Campbell's notion of the "hero's journey" that helped George Lucas perfect the Star Wars film narratives and create a framework with mass appeal. Shakespeare used his framework with mass appeal, and that earned him a place in history—as perhaps English literature's foremost thought leader, and the father of a narrative framework still widely in use today.

Clark's point is that you too need to map your ideas to frameworks inside your field. Building a framework helps achieve what she calls "elucidating the principles," showing what's most important and giving you a way to visualize the opportunities in your field. Frameworks help explain problems and possible solutions, and therein lies your way into the world of thought leadership.

We all have ideas. And  many books have been written with the goal of helping us draw out, define, and realize them. In an economy now trending toward freelance employment, hand-picking your best ideas and defining them well can mean the difference between earning a consulting contract or not, booking a gig and staying home. It is this development of your idea that takes you from the realm of average thinkers into one of thought leaders. Those at the front of the line for opportunities to change the world—whether that world be big or small—are people who lead their schools of thought. The challenge, though, is still arriving at the front of the line: how do you springboard with your seed of an idea into thought leadership and all the successes that inevitably follow?

The trouble with many thinkers, Dorie Clark points out in the first chapter of Stand Out, is that they're looking at the present, rather than the future. Citing Rita Gunther McGrath's spot-on re-evaluation of the old-fashioned notion of competitive advantage, Clark's wisdom on building your "stand out" idea is born from a kind of calibration of the thinking—you must begin with the right frame of mind. True, finding your next big idea is certainly going to require tuning yourself into your field—"[Stay] close to the ground", Clark says, "Where research and innovation take place."—but pinpointing that idea also demands expanding your perspective, both temporally and in terms of what's possible. Look at what's next, urges Clark, and be willing to take on challenges that have previously been ignored or taken for granted.

If you can explain things well and make them relevant to a broader audience, you can become a recognized expert.

You probably have ideas—great ones. You probably have a lot of them and it might not be obvious to you which of those ideas will be your rocket fuel for that trip to the forefront of your market or field.

Stand Out arrives to readers as a step-by-step manual for not only finding and developing your next "big idea," but also for marketing your thought leadership and building a home for it in the global marketplace. This new book builds naturally from Clark's reputation as a personal brand expert, proven previously in her book Reinventing You. With Stand Out, she brings that concept of personal branding to the world of thought leadership. But she's also quick to remind us to keep our eye on larger, mutually beneficial goals:

Thought leadership is about a lot more than just making money [...] It's about solving real problems and making a difference in a way that creates value for yourself and others.

True to its "user's manual" format, Stand Out is written with guiding questions throughout. If something in the preceding pages eludes your notice, the questions will bring you around to the key points. A thought leader herself, Dorie Clark has created her own framework for building and promoting ideas, and helping you get on the path to the front of your field. Even the most innovative among us can gain from Dorie's expertise on network and audience building. There are, of course, no guarantees when it comes to applying a business book to your own career, but Stand Out certainly delivers valuable insights for those bold enough to try. 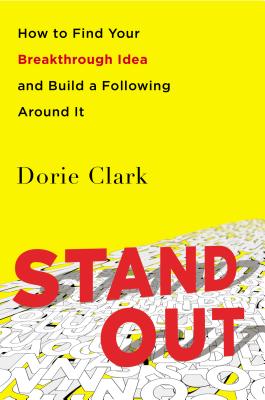