Widgets author Rodd Wagner tells us that "Employees are not your greatest asset" because "They're not yours, and they're not assets." The term “Human Resources” has bothered me ever since I first heard it when I entered the workforce as a cashier in a natural foods store. It is a cold, artificial, and inhumane way of referring to what is any company’s most important dimension—the human one, its employees.

I’ve always believed every company’s greatest, and first goal should be employing human beings and providing them with a way to (very literally) make a living—to build and grow their lives and by extension, and in great numbers, build and grow the economy. I’m not naïve on the fundamental fact that businesses must make money to survive, but I think the real reason a business needs to make money is to pay its employees—not only to do their work, but so that they do this larger work of contributing to the economy.

When our founder (and the man this review series was begun by and named after) Jack Covert was interviewed about what he was most proud of when he retired, it was not building a company that makes X amount of dollars every year or the famous authors he had a direct connection to, or even, as Bo Burlingham recently said, having had “done more for biz books than anyone else alive.” No, he was most proud of the fact that his employees were able to start their lives, buy homes, and start families if they wished under his tutelage based on the fact that he provided us all with good, stable employment.

There are many things that can be added to any organization’s mission, but whatever service it provides or product it creates, creating jobs (even if it’s only one for yourself, if you're a company of one) is the one underlying, base motivation it should exist.

The other thing that’s bothered me in recent years (yes, this review is a bit of a kvetch) is the way the term “employee” has been used almost as a pejorative in some business literature. People are urged to “become entrepreneurs, not employees,” as if there is something inherently wrong with employees, that there is no longer any value in the great numbers of us who get up every morning, and leave our families for the day to “bring home the bacon” at the end of it. And if you’re a “disengaged” employee, well…

In many quarters, “disengaged” has come to mean not that the employee made a wrong turn into the clutches of a cruddy manager or a widget factory, but that he has a character flaw.

Now, I get it, the workforce has changed. Entrepreneurship is king! And it is a creative force for our economy, but it’s also a risky venture. And all of those entrepreneurs and start-ups, and every company new and old, relies on one thing more than anything else for their success—employees. And it is their (read, your) job to keep them engaged and excited at work.

Rodd Wagner’s new book, Widgets: The 12 New Rules for Managing Your Employees As If They’re Real People is a great resource in figuring out or furthering your success at doing so. The alternative is not only demoralized and disengaged employees. In a recovering economy in which resignations once again outpace terminations, it means losing your most credentialed and talented people, because they’re no longer afraid to leave, and have many more opportunities to do so. And those that are left surely will be disengaged.

I’m sure you’ve seen it in your work or life. Having had great customer service at a store or on the phone one time, and then going back to them again and finding they’d cut costs, which too often means they cut their best front-line people first. Writing of a move by Circuit City in late 2006, Wagner tells us that:

Circuit City announced “it made a business decision, with respect to certain positions, to separate from employment hourly associates whose pay is 51 cents or more above established pay range.”

Besides the confounding corporate speak of that announcement, it essentially meant that those employees that were excited and engaged enough at work that they excelled to a point where they were rewarded financially by the company for it, were then penalized and fired for it.

Wired magazine blogger David Becker snarked that with the terminations, Circuit City had solved “that nagging problem of clerks being overly helpful and knowledgeable.”

Worse, as Rodd Wagner would tell you, is that with this move they had “hardwired fear through its organization” and violated his second rule: Make Them [your employees] Fearless. They had violated a lot of the other rules, as well, but at its base the move had abandoned the foundational idea that employee engagement and loyalty would be reciprocated, and that was a fatal flaw. A flaw that has an equally positive upside:

Because of the power of positive reciprocity, leaders who invest heavily in the experience of working at their companies gain exceptional intensity from their employees. “A lot of the current research on employee morale and managing people in general in organizations suggests that this may be the only remaining competitive advantage organizations have,” said Michael D. Johnson, assistant professor at the University of Washington. “Organizations that do this well tend to do really well financially.” 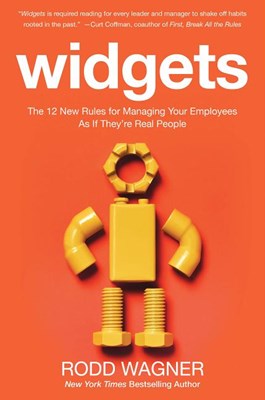 Widgets: The 12 New Rules for Managing Your Employees as If They're Real People