An updated version of Dr. Brené Brown's Daring Greatly has been releases in paperback and eBook! How the Courage to Be Vulnerable Transforms the Way We Live, Love, Parent, and Lead

Dr. Bren Brown ignited a global conversation with a powerful new vision for what it means to live courageously. Her # 1 New York Times bestselling book Daring Greatly was an international hardcover phenomenon that taught us to embrace vulnerability, combat shame, and live a wholehearted life.

After two years in print, 64 weeks on the New York Times Bestseller list, more than 23 million TED talk views and international sales in over 30 countries, Daring Greatly: How the Courage to Be Vulnerable Transforms the Way We Live, Love, Parent, and Lead is finally coming out in paperback with an updated Readers' Guide. Daring Greatly has caught the attention of everybody from Oprah Winfrey to Fast Company (who named Daring Greatly one of the top ten business books of 2012) and Amazon.com (who featured the book as one of their 100 books to read in a lifetime).

Daring Greatly explains that while vulnerability is the core of difficult emotions such as fear, grief and disappointment it is also the birthplace of love, joy, empathy and innovation. In this groundbreaking work, Bren explains why when we shut ourselves off from vulnerability we distance ourselves from the experiences that bring purpose and meaning to our lives. From daring leadership to fostering more engaged families, communities, and organizations, Daring Greatly is a compelling call to action to show up, be seen and live brave.

We hope you too will join us in Daring Greatly in 2015.

Bren Brown, Ph.D., LMSW is a research professor at the University of Houston Graduate College of Social Work. She has spent the past decade studying vulnerability, courage, worthiness, and shame.


Her 2010 TEDx Houston talk on the power of vulnerability is one of the most watched talks on TED.com, with over 15 million views. She gave the closing talk, Listening to Shame,  at the 2012 TED Conference in Long Beach.

Bren is also the founder and CEO of The Daring Way–a teaching and certification program for helping professionals who want to facilitate her work on vulnerability, courage, shame, and worthiness.

Bren lives in Houston with her husband, Steve, and their two children. 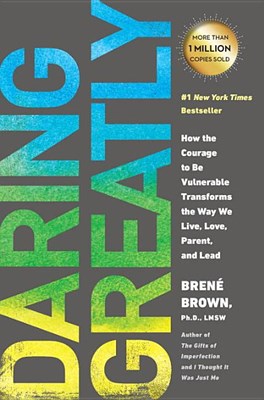 Daring Greatly: How the Courage to Be Vulnerable Transforms the Way We Live, Love, Parent, and Lead

Daring Greatly: How the Courage to Be Vulnerable Transforms the Way We Live, Love, Parent, and Lead