Steve Lohr's Data-ism explores the rise of big data and the future of decision making. Natural resources like coal, iron ore, and oil were the key productive assets that fueled the Industrial Revolution. Today, Data is the vital raw material of the information economy. And the explosive abundance of this digital asset, more than doubling every two years, is creating a new world of opportunity and challenge.

Data-ism: The Revolution Transforming Decision Making, Consumer Behavior, and Almost Everything Else by Steve Lohr (on sale March 10, HarperBusiness, ISBN 9780062226815, $29.99) is about this next phase, in which vast, Internet-scale data sets are used for discovery and prediction in virtually every field.

It is a journey across this emerging world with people, narrative examples, and insights. It shows that, if exploited, this new revolution will change the way decisions are made—relying more on data and analysis, and less on intuition and experience—and transform the nature of leadership and management. A technology reporter for The New York Times, Lohr chronicles the rise of Big Data, addressing cutting-edge business strategies and examining the dark side of a data-driven world.

Lohr uses two groups of characters to explore how Big Data affects our lives. On one hand, there are lone scientists like Jeffrey Hammerbacher, recognized as the first data scientist at Facebook, now at Mount Sinai Hospital in New York City, exploring how Big Data can improve disease discovery and patient care. On the other hand, there are global institutions like IBM, with a staff of hundreds of data scientists investigating the use of big data in everything from medicine to transportation, climate change to agriculture. Data-ism explains how individuals and institutions will need to exploit, protect, and manage their data in order to stay competitive in the coming years.

Steve Lohr reports on technology, business and economics for The New York Times. He was a foreign correspondent for a decade and served brief stints as an editor before covering technology starting in the early 1990's. In 2013, he was a member of the team that was awarded the Pulitzer Prize for explanatory reporting. He has written for magazines including The New York Times Magazine, The Atlantic Monthly, and The Washington Monthly. He is the author of a history of computer programming, Go To: The Story of the Math Majors, Bridge Players, Engineers, Chess Wizards, Maverick Scientists and Iconoclasts-The Programmers Who Created the Software Revolution. He lives in New York City. 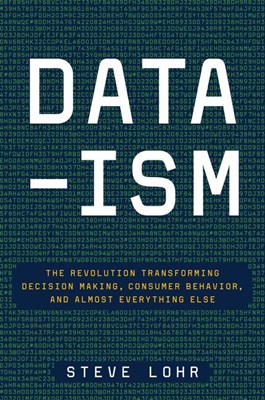 Data-Ism: The Revolution Transforming Decision Making, Consumer Behavior, and Almost Everything Else