The Conversation: How Seeking and Speaking the Truth About Racism Can Radically Transform Individuals and Organizations by Robert Livingston, Currency

Early in Robert Livingston’s new book, he shares the results of a conversation he had with a group of Blue Collar workers in West Virginia. When he asked how many of the Fortune 500 CEOs were Black, the guesses ranged from around 75 to 150. The actual number at the time was five. Rather than accounting for one in five, then, African Americans accounted for only one in a hundred of the world’s most powerful CEOs. Amidst calls for social change and justice last year, that number changed. It went down to four. “In fact,” according to Korn Ferry, “since 1955, there have only been 15 Fortune 500 Black CEOs.” Most of those he was talking to—”98 percent male, 99 percent White, and 100 percent rural”—were incredulous upon hearing that low number. They are used to seeing rich and famous African Americans everywhere in popular culture, while most of the people they know, people that look like them, struggle to get by.

However, many people—including some leaders—have little use for data and evidence. They believe what they believe—evidence or not—and to them presumption and knowledge are one and the same. That’s not how The Conversation treats the concept of knowledge. Throughout the book, we will lean on science as an arbiter of fact when it comes to assumptions about racism.

But the folks Livingston was talking to, even though one yelled out “fake news” upon hearing the number, were not resistant to reality—to the data and evidence that they uncovered in their conversation with Livingston—for one very important reason: they were a part of the conversation. What Livingston does in his new book is teach others how to take on “the critical task of Conversation.” And one of the things I love about the book is that, quite different from so many other books that suggest you can skip around it or pick pieces that are pertinent to you, Livingston is clear that:

This book consists of a total of twelve chapters—designed to be read sequentially, like a miniseries—with each chapter building on the previous one.

Reading the book is, like the Conversation he teaches you to foster and lead, a process. This one, Livingston suggests, will take you about one full day. So, he asks, “Are you willing to invest one full day of your life to substantially improve our society? I am confident that it will be worth it.” And why is he so confident? Because he believes that “Racial equity is an achievable goal,” that “racism is solvable.” That belief, I think he’ll convince you, is backed by “logic, data, and scientific evidence,” but it all begins with a conversation. (DJJS)

Do Better: Spiritual Activism for Fighting and Healing from White Supremacy by Rachel Ricketts, Atria Books

While most of us will never be fluent enough in racial justice and antiracism to help educate global brands like Google, WeWork, and Lululemon (as Rachel Ricketts has), actively educating ourselves is an essential part of a more equal world. Ricketts's new book Do Better provides a well-rounded approach to understanding White Supremacy, how it affects others, how it affects yourself, and the ways in which it is helpful or unhelpful to partake in antiracism. What makes Do Better feel like a more achievable workbook and guide than some others is Ricketts's faith in the value of internal work.

And it is because of this belief [in doing better] that I invoke Spiritual Activism and loving anger as my means of seeking and effecting change. That I tell it like it is, take no shit, and maintain wise compassion. It is how and why I channel my righteous rage into action and simultaneously recognize all of our struggles and humanity, especially those who have been the most oppressed.

Ricketts is obviously a compassionate person, and she effectively communicates this compassion through Do Better's end-of-chapter prompts, each one progressively guiding us through the common obstacles of, not just racial justice, but also any challenge we undertake. She builds in moments of soft reflection to balance out the hard work we should be doing daily. She reminds us to check in with our emotions, ask ourselves what we're afraid to feel, notice when our desire to be "right" supersedes our desire to improve, and more.

Do Better brings us all down to Earth. Ricketts takes us on a humbling journey: sharing her personal stories as well as collective histories and sufferings. But we don't suffer alone through these difficult truths or reflections of our lives. She provides extremely helpful prompts for further exploration of our ideas, our actions and reactions, and how we can better conduct ourselves in the future. (GMC)

Humor, Seriously: Why Humor Is a Secret Weapon in Business and Life* by Jennifer Aaker and Naomi Bagdonas, Currency

When a leader loses our trust—whether that be a parent, manager, or president—how do they gain it back? Dr. Jennifer Aaker and Naomi Bagdonas have a fascinating proposal: humor.

When we refuse to take ourselves so seriously, we relieve the stress that stands in the way of serious work, create more meaningful connections with our colleagues, and open our minds to more innovative solutions.

Aaker and Bagdonas share the behavioral science behind the benefits of humor in this book as well as through their course at Stanford's Graduate School of Business and through their digital 21-day bootcamp that's comprised of audio and text messages delivered daily to your phone.

Humor, Seriously makes clear that sometimes it's as hard to embrace humor as it is to assert authority. The book provides the example of a leukemia patient who led a widespread campaign in search of a donor with a bone marrow match. "While confronting his own mortality, Amit cultivated levity, which made him and everyone around him more motivated, nimble, and effective at getting people to register."

The authors cover a lot in only 7.5 chapters (yes, there is a chapter 7.5) including: some concerning statistics about collective loss of humor at the age we enter the workforce, the brain chemistry behind laughter and its ability to bring people together, exercises to activate a mindset more open to humor, strategic ways to use humor in your daily work and personal lives, and more!

As one of Porchlight's guiding beliefs is to "Keep books human," it's fair to say we also believe in keeping our communication human and humorous too! Even when our main forms of communication are digital, a silly Slack message or memes someone shares can make almost any day better, and make it feel a little more like the spontaneousness of working in an open office together.

Think Again: The Power of Knowing What You Don't Know by Adam Grant, Viking

We’re best guided by facts and science, but facts on the ground change, and science itself only works when we question what we believe to be true about the world around us. Most of us no longer think that the world is flat, or that the rest of the universe revolves around us here on Earth, because a few among us looked out at the cosmos, rethought and recalculated our place among them, and found otherwise. And then they taught others—eventually even the world’s most entrenched institutions—to see it, as well. It is never an easy process, but if ever there was a time to think again about what we know and believe, to think again about how the world works and how we can make our corners of it work a little bit better, now would be it. It can prove difficult to hold our leaders accountable, but we find it easy—emotionally exciting even—to question them. We find it deeply uncomfortable to question ourselves. As Adam Grant writes in his new book, Think Again:

Questioning ourselves makes the world more unpredictable. It requires us to admit that the facts may have changed, that what was once right may now be wrong. Reconsidering something we believed deeply can threaten our identities, making it feel as if we are losing a part of ourselves.

Grant opens the book by examining how to open our own minds before moving onto how we can encourage others to open theirs, and then to how we can create a culture of lifelong learning in our organizations and communities. All are necessary.

We are in the midst of numerous upheavals, in a world that is by its very nature unpredictable. Holding fast to old beliefs, especially if we find a like-minded community committed to them—can feel like a safe harbor in that storm. I think we’ll find there are many beliefs we must stand by and stay committed to, like our belief in democracy—itself an ongoing and evolving experiment, which I like to believe, like science, is committed to coming ever closer to the truth. But no one has ever claimed it is easy, and too often…

Arrogance, Grant notes, is often a mask for ignorance. But we should embrace being wrong, because it opens up opportunities and new possibilities. Think Again is a book about opportunity and being open to growth, about life as an ongoing education and being committed to remaining a work in progress—as individuals, and as a collection of individuals. (DJJS) 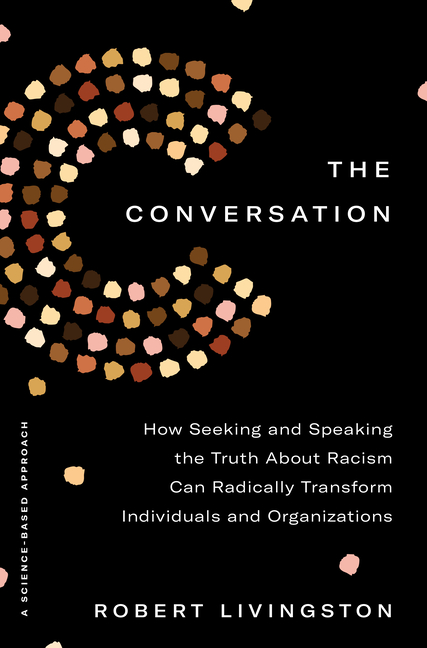 The Conversation: How Seeking and Speaking the Truth about Racism Can Radically Transform Individuals and Organizations

Do Better Spiritual Activism for Fighting and Healing from White Supremacy 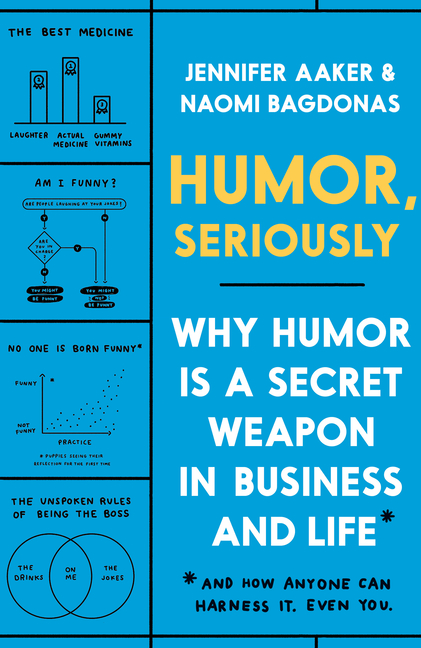 Humor, Seriously: Why Humor Is a Secret Weapon in Business and Life (and How Anyone Can Harness It. Even You.) 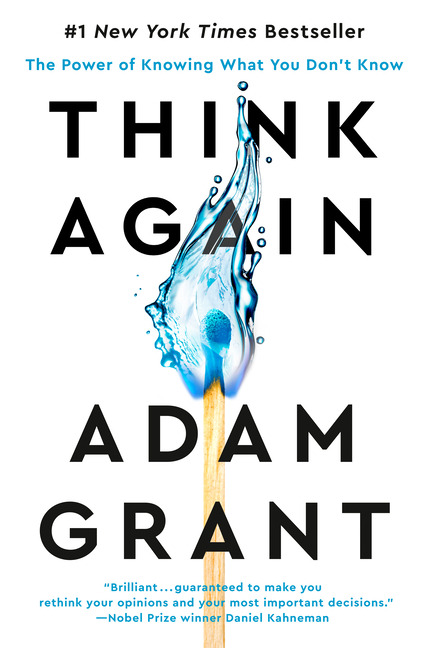 Think Again: The Power of Knowing What You Don't Know