Stratfor founder and Chairman George Friedman investigates the intersection of culture and conflict in FLASHPOINTS: The Emerging Crisis in Europe Divided into borderlands, Europe is a place where nations, religions, and cultures mingle. Despite its relatively modest size, geography makes European unity difficult. The continent does not consist of a single, undifferentiated landmass, but instead is fragmented and crowded with a diversity of nations and people. As a result, small countries can survive for long periods of time, producing borderlands – divisions that separate the European peninsula from the European Mainland, the West from Russia, and beyond. These borders are locations where cultures meet, but can also be the flashpoints where wars are fought.


Despite these divisions, Europe has historically dominated the globe. It's difficult to comprehend the extent to which Europe in 1914 had transformed the very fabric of life throughout the world. Over the previous four hundred years, European nations had collectively conquered most of the planet – and in doing so, reshaped the way most humans conceived of themselves. But following this period of influence and expansion, between 1914 and 1945, roughly one hundred million Europeans perished from internal political causes including war, genocide, purges, and planned starvations. Historically, other civilizations had undergone similar turmoil, war, and savagery – but the unexpectedness, intensity, and rapid consequences for the rest of the planet were uniquely unprecedented.

In Flashpoints: The Emerging Crisis in Europe, George Friedman asks the most important question facing global citizen today – have conflict and war actually been banished from Europe? Or is today's period of comparative peace merely an interlude following the centuries of conflict that preceded it? We are now living through Europe's test and to answer that question, must investigate centuries of European history to discover how today's events will once again impact the rest of the world. Flashpoints offers a clearly explained, riveting look at the history that has led us to this moment, as well as the situations, conflicts, opportunities, and events to come.

George Friedman's impressive track record in forecasting includes successful predictions covering the European financial and political crises, increased Russian aggression in its "Near Abroad," the Arab Spring, and conflict in Syria. Flashpoints continues this tradition of correct calls with new predictions focused on the struggle for Ukraine, the fragmentation of Europe's eastern frontier, hostility in Turkey, and the rise of right wing extremism throughout the continent at large, such as: 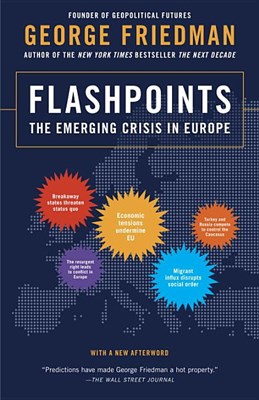 Flashpoints: The Emerging Crisis in Europe

Flashpoints: The Emerging Crisis in Europe