From three partners at Google Ventures, a step-by-step guide to going from problem to prototype in five days using the same method that led to Gmail, Google X, and Chrome. “Sprint offers a transformative formula for testing ideas that works whether you’re at a startup or a large organization. Within five days, you’ll move from idea to prototype to decision, saving you and your team countless hours and countless dollars. A must read for entrepreneurs of all stripes.” —Eric Ries, author of The Lean Startup

Entrepreneurs and leaders ask tough questions every day: Where’s the most important place to focus our effort, and how do we start? What will our idea look like in real life? How many meetings and discussions does it take before we can be sure we have the right solution?

Three partners at Google Ventures—Jake Knapp, John Zeratsky, and Braden Kowitz—developed a surefire way to answer these questions both quickly and effectively: they call it “the sprint.” Together, they have completed more than 100 sprints with companies in mobile, e-commerce, healthcare, finance, and more. Now they’re ready to share what they’ve learned with the masses with Sprint: How to Solve Big Problems and Test New Ideas in Just Five Days (S&S; Hardcover; 3/8/16).

A sprint offers a path to solve big problems, test new ideas, get more done, do it faster, and have fun along the way. In Sprint, Knapp, Zeratsky, and Kowitz walk readers through the five-day process one step at a time:

In addition to providing a detailed step-by-step guide to running your own sprint, the book is also filled with dozens of behind-the-scenes stories of successful sprints, including Blue Bottle Coffee, Savioke, Medium, Nest, Foundation Medicine, and many more. Knapp, Zeratsky, and Kowitz also include checklists for necessary materials and personnel, sample questions that can help facilitate the process if your team gets stuck, as well as an FAQ section for easy reference.

A practical guide to answering critical business questions, Sprint is a book for teams of any size, from small startups to Fortune 100s, from teachers to non-profits. It’s for anyone with a big opportunity, problem, or idea who needs an answer today.

Jake Knapp created the Google Ventures sprint process and has run more than a hundred sprints with startups such as 23andme, Slack, Nest, and Foundation Medicine. Previously, Jake worked at Google, leading sprints for everything from Gmail to Google X. He is currently among the world’s tallest designers.

John Zeratsky has designed mobile apps, medical reports, and a daily newspaper (among other things). Before joining Google Ventures, he was a design lead at YouTube and an early employee of FeedBurner, which Google acquired in 2007. John writes about design and productivity for Wall Street Journal, Fast Company, and Wired. He studied journalism at the University of Wisconsin. 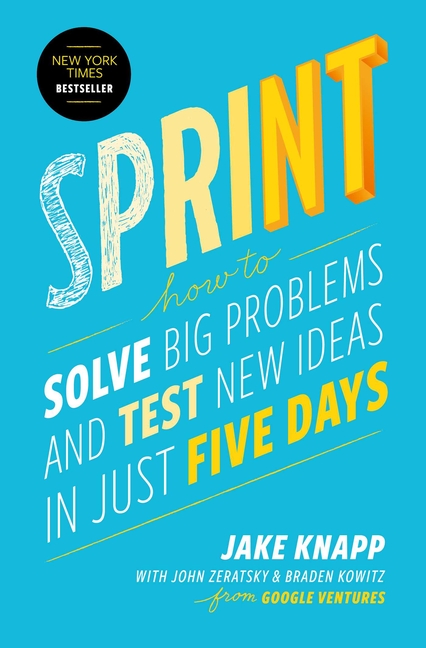