Helene Lerner, founder of WomenWorking, has a new book out about the what confidence in business really means, and how to step up and take what's yours. "True confidence isn't about fearlessness; rather it's having the courage to jump in even when your knees are shaking," says Helene Lerner, founder of WomenWorking.com, reflecting on one of the major research findings on women and confidence featured in her new book.

The Confidence Myth (#confidencecamp, March 2, 2015, Berrett-Koehler Publishers) draws on Lerner's own experience along with that of other female leaders and on a survey she conducted of more than 500 working women. The research goal was to help women benefit from the wisdom, experience, and lessons learned of a mostly confident group of professional women.

Lerner claims women need to redefine confidence by recognizing that setting and achieving lofty goals doesn't require as much mastery as one would think. Whether asking for a raise, a promotion or offering up ideas in a meeting, courage is the main ingredient for success. Those who wait to take action until they feel 100% confident are likely to miss out on big opportunities.

Perfectionism (55%), bosses who are disrespectful or micromanage (54%), fear of failure (48%), feeling disconnected from my job because the work doesn't leverage my skills (49%), and having colleagues who were uncooperative and overly critical (46%) were cited most among respondents who struggled with confidence.

The Confidence Myth also offers "What Would You Do?" scenariosdozens of challenging situations in which women commonly hold themselves back with effective solutions. For example, here are four:

#1: You're asked to suggest the name of a candidate for a job two levels above you.

#2: You're in a meeting with your supervisors and they are talking about a challenge you know how to solve.

#3: You're visiting a client and he confides in you, explaining that a consultant from another firm dropped the ball.

#4: You've been offered a position with a start-up division. Your intuition is advising you to accept, even though doing so involves some risks.

As well, Lerner offers 30 Days of Confidence Sparks, simple but powerful exercises and techniques that can catapult anyone's career to the next level, such as:

When interviewing for an ambitious assignment, make a list of the skills you have, the skills you need to learn, and the tasks that can be delegated. Now address your fear of not being able to handle the situation, and see the truth as it is. You have several skills, and you can learn or delegate the rest. Breaking down the job into its various parts may also help. What daily tasks can you do right now? Which ones will you assign to someone else?

Let's bust the myth that "I don't have the skills needed to take that job" and realize the truth: "What I don't know I can learn or delegate." Mobilize the support you need to take a bigger leap—pick one or two people you can call on for expertise and feedback, but also be your own mentor and ask yourself "Why not me?"

The playing field is not level and gender inequities persist, but the women Lerner interviewed navigated their way to success and share what they've learned along the way. According to Lerner, "The problem isn't so much that women lack confidence but that they misunderstand the true meaning of confidence. The key to success is seizing the opportunity and acting now."

Helene Lerner is the CEO of Creative Expansions Inc. and the founder of WomenWorking.com, a career website with a robust social media presence including over one million followers on Facebook followers with nearly three million people on average talking about her page on any given day. She is also an Emmy-winning executive producer, an independent public television host, a Fortune 500 workplace consultant and the author of twelve books. Lerner has produced more than twenty televised specials and received American Public Television's MVP Award for her outstanding contributions to public television. Follow Helene on: facebook and twitter. 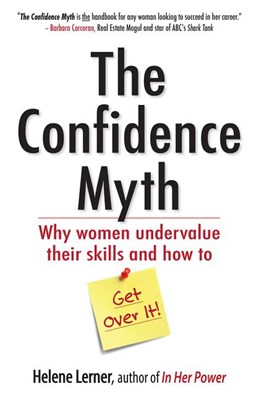 Confidence Myth: Why Women Undervalue Their Skills, and How to Get Over It