From the visionary thinker and writer Kevin Kelly, a guide through the twelve technological forces that will shape the next thirty years and transform our lives. “How will the future be made? Kevin Kelly argues that the sequence of events ensuing from technical innovation has its own momentum . . . and that our best strategy is to understand and embrace it. Whether you find this prospect wonderful or terrifying, you will want to read this extremely thought-provoking book.”—Brian Eno, musician and composer

“Kevin Kelly has been predicting our technological future with uncanny prescience for years. Now he's given us a glimpse of how the next three decades will unfold with The Inevitable, a book jam-packed with insight, ideas, and optimism.”
—Ernest Cline, author of Ready Player One

Since the mid-1980s Kevin Kelly has been a participant in, a reporter and writer on, and a leading thinker about technology, immersing himself both in technology’s long term trends and its social consequences. Kelly’s new book, The Inevitable: Understanding the 12 Technological Forces That Will Shape Our Future (Viking; On-sale: June 7, 2016; $28.00; ISBN: 9780525428084), is a kind of grand synthesis of his thinking on where technology is heading and where we should position ourselves as this new world emerges.

According to Kelly, much of what will happen in the next thirty years is inevitable, driven by technological trends that are already in motion. These twelve trends overlap and are codependent on one another, and will completely revolutionize the way we buy, work, learn, and communicate with each other:

By understanding and embracing these forces, says Kelly, it will be easier for us to remain on top of the coming wave of changes and to arrange our day-to-day relationships with technology in ways that bring forth maximum benefits.

What does this future world begin to look like? We’ll have ubiquitous artificial intelligence that can accomplish professional human tasks cheaply and reliably. We’ll own less and less as we pay to access more things anytime, anywhere. Keyboards will go away, and we’ll talk to our devices mostly with gestures and voice. Virtual reality will be as commonplace as cell phones. Robots will help us create new jobs for humans. Every surface will be capable of turning into a screen, and every screen we watch will watch us back. Our daily lives will be totally tracked by ourselves, and by others. And, predicts Kelly, we will use newer technology to tame the nearly overwhelming flood of choices and options generated by older technologies.

Reviews of Kelly’s 2010 book What Technology Wants praised his “polymath erudition and infectious confidence” (The Washington Post) in writing that was “packed with insight” (The New Scientist) and “consistently provocative and intriguing” (The Economist), and readers will find more of the same in The Inevitable as Kelly outlines the opportunities and disruptions that are heading our way.

Kevin Kelly is Senior Maverick at Wired Magazine. He co-founded Wired in 1993, and served as its Executive Editor until 1999. He is editor and publisher of the Cool Tools website, which gets half a million unique visitors a month. From 1984 - 1990 Kelly was publisher and editor of The Whole Earth Review, a journal of unorthodox technical news. He co-founded the ongoing Hackers Conference, and was involved with the launch of the WELL, a pioneering online service started in 1985. He is the author of Cool Tools, What Technology Wants, New Rules for the New Economy, and the classic book on decentralized emergent systems, Out of Control. His journalism has appeared in The New York Times, The Wall Street Journal, The Economist, Time, Harpers, GQ, and Esquire. 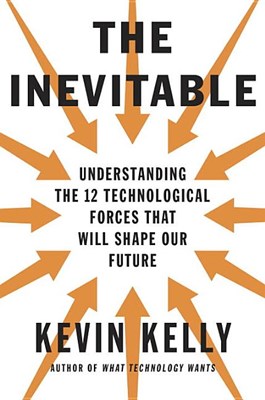