Jon Gordon has had to work hard to become an optimist. His new book will help you accomplish the shift from pessimism to optimism more easily.

Can a Pessimist Become an Optimist?

If you assume that your natural pessimism prevents you from ever becoming a more positive person, think again. Best-selling author Jon Gordon says you can learn to change your inherent negative belief system and embrace positivity…and this will transform your life.

Hoboken, NJ (April 2017)—You may be aware that there are huge benefits to being a positive person. For starters, optimism just feels better. But also, studies show that optimistic people fare better in life. For example, research by Manju Puri and David Robinson, business professors at Duke University, shows that optimistic people work harder, get paid more, are elected to office more often, and win at sports more regularly (1. Puri, M. & Robinson, D. (2007). Optimism and economic choice. Journal of Financial Economics, 86, 71-99.). They also have stronger relationships.

So, all that said, why wouldn’t you choose to be an optimist? The answer seems depressingly clear: because you’re a pessimist by nature. It seems you just can’t help yourself.

You’re not alone. Even Jon Gordon, an expert on positivity and author of the new book The Power of Positive Leadership: How and Why Positive Leaders Transform Teams and Organizations and Change the World (Wiley, April 2017, ISBN: 978-1-1193519-7-9, $25.00, www.jongordon.com), says that he has to work hard to be an optimist.

“I think of myself as a pessimistic optimist,” says Gordon. “I will always gravitate, naturally, toward the negative. The good news is that pessimism is just a state of mind. It’s not permanent. You can change it, and you definitely should. I’ve worked really hard over the years and it’s changed my marriage, my relationship with my children, my life, and my career for the better.”

It all comes down to the power of belief, says Gordon. Optimists believe in a positive future. The research shows that their belief makes them more willing to work hard to take actions to achieve that future. This creates a self-fulfilling prophecy that helps them succeed.

So how can you reset your belief system and become an optimist? Gordon offers the following tips:

Realize you have the power to distort reality. We often think that reality is objective, but that’s not true, says Gordon. If you take a look at how leaders of positivity have changed the world throughout history, it becomes clear that we can define reality and distort it in a positive way. Before there was an iPhone, iCloud, or Apple Watch, there was Steve Jobs, a man with vision, positive ideas, and a reality distortion field.

“Jobs repeatedly convinced Apple employees that they could meet deadlines everyone thought was impossible,” says Gordon. “Time after time they would tell Steve he was being unrealistic and there was no way they could create software or hardware in the amount of time he was expecting. And yet, they did accomplish the ‘impossible.’ Jobs’s team said he distorted their reality from pessimism to optimism. Their newfound optimism ultimately helped them succeed.”

Look at your challenges as opportunities. A recent Gallup study shows that the worst event of our lives often leads to the best if we stay positive and keep moving forward. Gordon’s advice: Believe that the best is yet to come.

“Even when Clemson football lost the national championship in 2015, head coach Dabo Swinney believed they would return the following year and kept pointing his team toward a positive future,” says Gordon. “He didn’t see the loss as a challenge. He saw an opportunity to come back and win it the following year—and that’s what they did.

See failure as a part of your growth. Anyone pursuing anything worthwhile will fail and fail often. Therefore, Gordon says failure is an inherent part of success, and not your enemy or something to be ashamed of. It doesn’t define you; it refines you. If you didn’t fail, you wouldn’t build the character you need to succeed. Keep this in mind when you experience a so-called “failure” and focus on how you can grow from it and move forward.

“When visiting with and speaking to several major league baseball teams, I kept hearing from players and coaches that baseball is ‘a game of failure,’” says Gordon. “Even a Hall of Fame player will fail to get a hit two out of three times. And most players will fail to get a hit three out of four times. But I saw it differently, and I offered a different perspective—that baseball is a game of opportunity. No matter what happened on the last play, pitch, or at bat, players get the opportunity to make the next one great. When you shift your perspective, you’ll see that what you initially view as failure is really a stepping stone to success.”

Focus on solutions instead of complaints. A “no complaining” rule can have a powerful impact on your life. The rule says you aren’t allowed to complain unless you offer one or two possible solutions. Gordon says when we complain we focus on what’s wrong and feel disempowered. But when we focus on solutions, we feel empowered and empower others to make positive changes.

Know that we create our lives and success inside-out, not outside-in. It’s important to understand that we don’t create our world and success outside-in. We create it inside-out. This means that your circumstances and the events that happen outside you in the world are not meant to define you. You are meant to define your circumstances. The power is not in the circumstance. It’s in your state of mind and the love, passion, soul, purpose, and perspective that you lead and create with.

Coach Donna Orender is a great example. When she served as commissioner of the WNBA, she saw a lot of negativity amongst those in the corporate offices. There was a feeling that no one cared about women’s basketball and a lack of belief that the organization could be successful. But Orender saw the passion and optimism in the coaches and players, and she believed in them and in the future of the WNBA. She began building an optimistic belief system and inspired her colleagues to believe in the WNBA’s future as well. By focusing on one success at a time, she helped create a new reality for herself and changed the organization from the inside-out.

Gordon points out that there’s no limit to your potential success. He reminds us that we’re all potential leaders (whether “leader” is in our job title or not) with the ability to set a better example for our family, friends, and colleagues. But we can lead only when we choose faith instead of fear and constantly journey toward optimism.

“So much of our negativity is based around fear,” concludes Gordon. “So embracing a more positive worldview means letting go of that fear and refusing to live under the shadow of pessimism. Remind yourself that you have a choice each day and that those choices create your path. Choosing faith over fear frees us to look for the opportunity instead of the obstacle, the potential instead of the limit, and the hope instead of the hopelessness.”

Jon Gordon’s newest book is The Power of Positive Leadership: How and Why Positive Leaders Transform Teams and Organizations and Change the World. His best-selling books and talks have inspired readers and audiences around the world. His principles have been put to the test by numerous NFL, NBA, and MLB coaches and teams, Fortune 500 companies, school districts, hospitals, and non-profits.

In addition to his new book, Jon has written numerous bestsellers, including The Energy Bus, The Carpenter, Training Camp, The Seed, You Win in the Locker Room First, and The No Complaining Rule. He and his tips have been featured on Today, CNN, CNBC, The Golf Channel, Fox and Friends, and in numerous magazines and newspapers. His clients include the Los Angeles Dodgers, Atlanta Falcons, Campbell’s Soup, Dell, Publix, Southwest Airlines, Los Angeles Clippers, Miami Heat, Pittsburgh Pirates, BB&T, Clemson Football, Northwestern Mutual, Bayer, the U.S. Military Academy, and more.

Jon is a graduate of Cornell University and holds a master’s in teaching from Emory University. He and his consulting company are passionate about developing positive leaders, organizations, and teams.

Founded in 1807, John Wiley & Sons, Inc., has been a valued source of information and understanding for 200 years, helping people around the world meet their needs and fulfill their aspirations. Wiley’s core business includes scientific, technical, and medical journals; encyclopedias, books, and online products and services; professional and consumer books and subscription services; and educational materials for undergraduate and graduate students and lifelong learners. Wiley’s global headquarters are located in Hoboken, New Jersey, with operations in the U.S., Europe, Asia, Canada, and Australia. The Company’s Web site can be accessed at www.wiley.com. The Company is listed on the New York Stock Exchange under the symbols JWa and JWb. 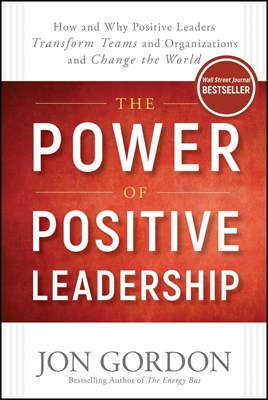