In his new book, Bernie Swain captures the transformational stories of a generation of leaders he's come to know while representing them at the Washington Speakers Bureau.

Starting a business is a wonderfully naïve venture.  Only a fortunate few will survive—and very few of those will have something special to say about failure, success, and leadership.

Bernie Swain is one of those very fortunate people.  With no experience or plan, he quit his job in 1980 to join his wife Paula and friend Harry Rhoads to start a lecture agency. Today, the Washington Speakers Bureau (WSB) is the largest and most respected speakers bureau in the world.

In Swain’s new book, Who Made Me What I Am, Swain captures the transformations of an eclectic and productive group—34 leaders he became friends with thanks to representing them as speakers over the years.

From Doris Kearns Goodwin to Colin Powell, Terry Bradshaw to Tom Brokaw, and Tony Blair to Dave Barry, this assembly of people defines a generation. The book provides rarely-heard personal stories about what’s motivated them to become the leaders they are today.  You’ll learn about their:

While most of those profiled are over the age of 50, many of their turning points occurred in their 20s or even younger. All generations—from those starting out in life today to those looking back on a life well spent—will be inspired and empowered by the people Swain profiles because these exceptional leaders have volumes to teach us all.

The Leaders of Who Made Me What I Am: 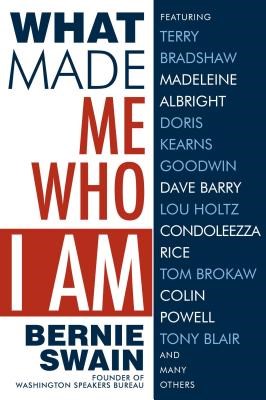