Addressing The Behavior Gap in the New Year

We don't recommend too many personal finance titles around here. The last one I can remember us being really excited about was Lee Eisenberg's The Number, which came out in 2006 and didn't do as well with the general readership as we thought and hoped it would. Financial literacy is a immensely important topic, but most personal finance books are rather dense—as well-written, easy-to-understand and exciting to read as the assembly instructions to the bar stool you just got for Christmas.

We don't recommend too many personal finance titles around here. The last one I can remember us being really excited about was Lee Eisenberg's The Number, which came out in 2006 and didn't do as well with the general readership as we thought and hoped it would.

Financial literacy is a immensely important topic, but most personal finance books are rather dense—as well-written, easy-to-understand and exciting to read as the assembly instructions to the bar stool you just got for Christmas. They're also very often written by folks who are just "selling water by the river," bottling a resource you could easily get for free if you'd just take a few more steps. And at other times, their message just seems to be painfully obvious—such as in the lovely little video below.

And that's the honest ones. The darker side of the field is filled with get-rich-quick schemes and late-night infomercial charlatanry.

But every once in a great while a diamond comes out of the personal finance rough. The Behavior Gap: Simple Ways to Stop Doing Dumb Things with Money by Carl Richards is one such gem. And if getting your finances in order is on your list of resolutions for the New Year, it's coming at the perfect time—January 3rd.

You may know Richards from the Bucks Blog over at The New York Times. If so, you know what to expect: a calm, clear, honest and reasonable voice that peppers its insights with "back-of-the-napkin" sketches and diagrams. (If you're not familiar with him, take a peak at A Plan for 2012 That You'll Actually Follow to get an idea of what you'll be getting into here.)

Richards coined the term "behavior gap" to describe the difference between average investment returns and investor returns, which are much lower. And he makes a persuasive case that closing this gap doesn't require learning a secret financial formula or finding the perfect investment—which he argues does not exist abyway—but overcoming irrational instincts and finding balance.

That sounds somewhat out of place in a book about finance, but it's a vitally important core to have. (And, though this book doesn't address larger financial issues, I think the same could be said for the finances of any company large or small, and any country in the world.) Perhaps the best advice he gives in he book is to "Focus on your own behavior, not the market's behavior:"

"Have you seen what the market is doing?" People often say this when they are in a state of shock or exhilaration. They're ready to go to cash until things "clear up," or they're preparing to load up on stocks before it's "too late." Notice the implication that the market is "doing" something right now. In reality, we only know what the market has already done.

The Behavior Gap won't show you how to predict the market or get rich quick—not financially anyway. You'll learn what financial matters you can control and which you can't, what you should plan on and what you shouldn't, and that it's okay to make mistakes from time to time, because you will. It provides a framework and a mindset with which to approach your financial life that enriches the quality of your life as a whole—the best return on investment I think you'll be able to find. Instead of providing easy answers, it prompts you to ask the right questions. After all, only you can be an expert on what you want, and only you can find it.

It won't identify your behavior gaps, but it will help you identify them for yourself. He addresses this reality in the book's conclusion:

I wish I could be more specific about how to solve your problems, but because I don't know you personally, I can't give you specific advice about your individual behavior gaps. Remember: taking financial advice from a stranger is dangerous.

It is that honest, sober and reasonable assessment&mashalong with the questions and tools he provides for you to make your own personal assessments—that makes The Behavior Gap so valuable.

I don't know about you, I'm tired of personal finance (all finance, really) being treated as if it's a game we're all playing, tired of all the yelling, bells-and-whistles, irrational exuberance and (by-turn) panic. I'm tired of feeling as if I need to be plugged into the news 24/7, seeking out the advice of analysts and gurus who seem to be only pretending like they know what they're talking about to keep my head above water. That makes some people happy, and I wish those people all the money and happiness they can possible hold onto, but it makes me nauseous. As Dan Heath says in his blurb for the book, "Carl Richards is the anti-Jim Cramer," and that's exactly what I'm looking for.

If you feel similarly, and improving your financial outlook (in the best sense of that word) is on your list of resolutions for the New Year, The Behavior Gap is the first book you should pick up in 2012. 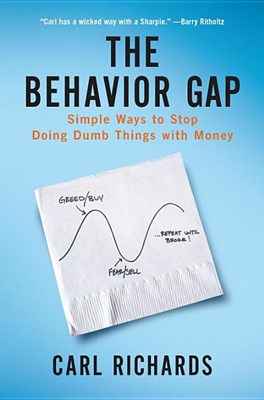