Michelle Tafoya: Well, let's talk about captains for a minute.

During the offseason, Caron Palmer's dad gave him a copy of this book. It's called It's Your Ship and it's by a naval captain who turned a mediocre ship into one of the best crews and best ships in the Navy. Now Carson read it cover to cover and he told me he took away two lessons from this.

Number One: If the people around you believe you care about them, they will follow you into battle.

Number Two: The leader must be above the group but of the group.

And his teammates must believe in him. They voted him offensive team captain for the season, Mike. He said that was the single greatest honor of his career.

Mike Tirico: More important than the Heisman Trophy, he said. Kind of surprised us all when he said it.


You've seen that all kick-off weekend, those Captain C's, permanent captains, season-long captains by Roger Godell [NFL Commissioner], as part of the edict to increase the leadership and leadership awareness within each locker room. And the teams have voted for two captains. And we have seen alot of the familiar, big name players wearing those this week.

Tony Kornheiser: That was an Isman Brothers' song- It's Your Ship, Do What You Wanna Do.

Ron Jaworski: Where is your mind sometimes? 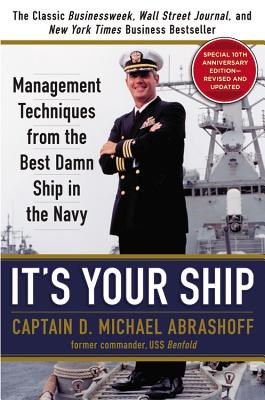 It's Your Ship: Management Techniques from the Best Damn Ship in the Navy (Revised, Updated)

It's Your Ship: Management Techniques from the Best Damn Ship in the Navy (Revised, Updated)