In 1986, a punk band out of Southern California called Uniform Choice released a record called Screaming For Change. Their lyrics dealt with making better personal decisions, treating people fairly, and creating positive social change through uniting different groups of people. The message resonated, and their popularity grew. Contrary to much of the world's, and some of punk rock's, negativity, the message was hope, and that together, "we" could make things better.

Following this record, the group began to change their sound and style. The articulate and thoughtful messages were still there, but the style change seemed to happen overnight, and the fans disappeared, soon resulting in the demise of the group. What's interesting about this is that when things are a mess or undesirable, change is a great idea. When things are how we want them, we often cling to the old saying, "if it works, don't fix it." Yet change is all around us, happening constantly. It's not as if when we don't instigate it, it doesn't occur. We must be prepared to adapt to external changes, and have the willingness to make internal changes even if we feel unprepared to make them.

Thomas DeLong has an interesting new book published by Harvard Business Review Press titled, Flying Without a Net: Turn Fear of Change into Fuel for Success. The book targets high achievers, people who constantly strive to accomplish goals, and in doing so, create their own set of personal criteria they must adhere to, their own box they often don't want to think outside of. When these people are asked to do something differently, they revert to their strengths, understanding that the risk is too high for failure and they avoid that at all costs. It's human nature, really. No one wants failure, but of course sometimes it's the only way to really learn, and really discover how to create positive change amongst the negativity around us. DeLong explains: "One leader told me that when he got home he treated his family like subordinates. He knew his dictatorial behavior wasn't good at work and it wasn't good at home, but he continued to act inappropriately because he couldn't or wouldn't make the leap. And it is a leap. Imagine what must have gone through this leader/dictator's mind as he considered changing his behaviors: "What if I try to be more fair-minded and encourage participatory decision making? My people will take advantage of me and whisper that I'm getting weak. My kids will rebel and get in all sorts of trouble and think I'm a pushover." That is a valid concern. Yet, the leader understands there is a problem with continuing on the path they're on. DeLong responds: "You can overcome your anxieties and change your behaviors. You can display the courage necessary to do the right thing poorly, followed by doing the right thing well, and learn and grow from that experience...the path to success isn't a straight line, but rather one that requires a brief detour in an unexpected direction, one that provides the direction for greater professional and life satisfaction." Of course it's not easy. Even by way of a light cultural example of wishy-washy punk rock fans we can see that reacting to change can be a difficult adjustment. That's why, for professionals, and people who seek to create change in others, books like DeLong's are important - to help us understand what happens to ourselves in the process, and how to encourage others to use their skills to create positivity in the world. And creating change is in many ways what business is about, but on a personal level, it's something we all need to understand better and take action on. 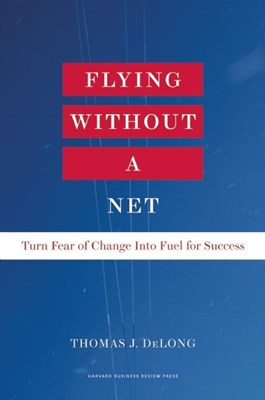 Flying Without a Net: Turn Fear of Change Into Fuel for Success