There have been an incredible amount of books published about China in the past year. They include The Writing on the Wall, China Now, All the Tea in China, Doing Business in China , Dragons at Your Door, and In China's Shadow. And that's really just the tip of the iceberg.

There have been an incredible amount of books published about China in the past year. They include The Writing on the Wall, China Now, All the Tea in China, Doing Business in China , Dragons at Your Door, and In China's Shadow. And that's really just the tip of the iceberg. It seems that wherever you turn, someone's talking or writing about China. I've read and enjoyed most of the books listed above, but the impact of all this still seemed somewhat distant, something in my mind. A Milwaukee Journal Sentinel article brought it a little closer to home this morning. You see, our governor is leading a trade mission to China next week. The author of the article John Schmid reports that Governor Doyle will have two new tools to use to promote our state when he's there.

The first is the federal government's designation of southeastern Wisconsin in May as a special economic zone that offers coveted U.S. residency rights to qualified foreign investors. The second appeals directly to basketball fans in the world's most populous nation: 7-foot Chinese power forward Yi Jianlian, the sixth pick in the June National Basketball Association draft, signed last week with the Milwaukee Bucks and all but ensured that millions of Chinese have a sudden curiosity in knowing more about a place called Milwaukee. "It will put Milwaukee on the map," predicts Peter Beitzel, vice president of the Metropolitan Milwaukee Association of Commerce and one of Doyle's delegates. [...] "The many millions of Chinese who watch basketball games just watch Houston, but now they will watch Milwaukee as well," Beitzel said. It's hard to underestimate China's love of hoops. The NBA estimates there are as many Chinese who play basketball, in recreational or youth leagues, as there are people living in the U.S.

I like basketball well enough, and the impact Yi Jianlian could have on Milwaukee's global visibility is interesting, but I'm more interested in how the designation of our area as a special economic zone will play out. China is already Wisconsin's third largest export destination at $870 million in 2006. That's up from $109 million in 1996, when it was 18th on the list of countries we exported to. There are obviously two sides to the story, and Schmid lays them out well.

For every dollar of goods that the U.S. exports to China, the Chinese ship more than $5 of goods to the U.S., creating the most lopsided trade deficit between any two nations on the planet. In 2006, according to the U.S. Census Bureau, the U.S.-China trade deficit stood at a record $232 billion, stoking anger among some commentators and politicians that China's cheap labor siphons jobs from advanced economies and depresses their wages as well. Before he left, Doyle wanted to draw attention to the flip-side of the trade equation. The state Department of Commerce released a 10-page report Thursday that showcases China's growing appetite for made-in-Wisconsin exports. Wisconsin exports to China have increased an average of 23% annually throughout the past decade and jumped 29% in 2006 from 2005, according to the report. Because Wisconsin doesn't track imports, it cannot track its trade deficit.

I'm very interested to see how much affect this will have on our local economy. I'd describe myself as cautiously optimistic. (Click below to continue reading) There's another recent initiative I would like to mention quickly as well. As reported in the Shepherd Express, two state senators have shepherded a bill through the legislature that "creates a series of tax credit incentives to make it more financially worthwhile for film and TV production to occur in the state". Background scenes have already been shot here for a pilot starring Lou Diamond Phillips called "The Watch" even though the incentives don't kick in until January 1st. David Fantle, of VISIT Milwaukee, was quoted in the article saying:

You know how Mayor [Tom] Barrett likes to say of Milwaukee, 'Laverne and Shirley don't live here anymore'? This would kill off Lenny and Squiggy for good. 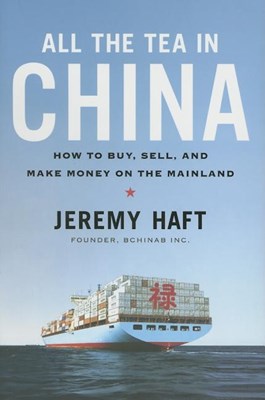 All the Tea in China: How to Buy, Sell, and Make Money on the Mainland